There are many reasons for investors to love Ozon.

Ozon (OZON -8.15%) is an e-commerce platform that is rapidly gaining traction in Russia. Three years ago, Ozon was essentially unknown, but it is now the second-most-popular digital shopping service in the country, with 59% nationwide recognition. In addition, 73% of consumers polled shared that they trust Ozon, a total just below the 78% for fashion platform Wildberry, Russian's largest online retailer.

The company is far from a one-trick pony and is rapidly evolving into a conglomerate. So let's look at why 4.3 times revenue is an excellent price for the high-flying growth stock. 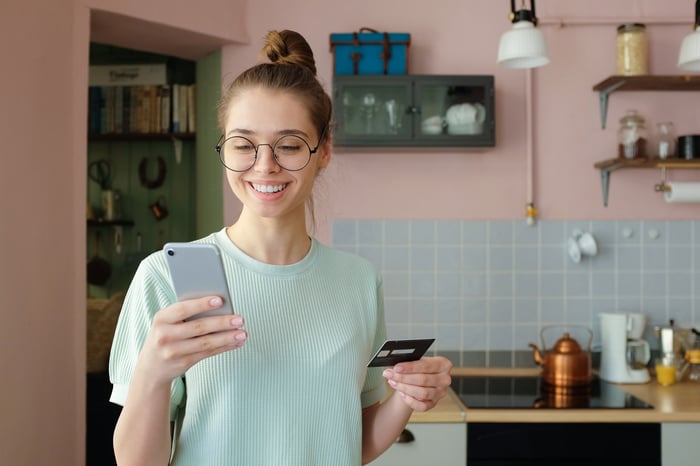 Similar to Amazon (NASDAQ: AMZN), Ozon started out as a humble digital book store. But unlike Jeff Bezos' burgeoning empire, the big e-commerce idea (beyond the realm of books) did not take hold in Russia until now. The country was dealing with the economic fallout of the Soviet Union's collapse, and internet adoption in the country remained chronically low for years.

The pandemic changed that, enticing many Russians to shop online for the first time. During the second quarter of 2021, Ozon's revenue grew by 53% year over year to 37.018 billion rubles ($498 million) with over 18.4 million active buyers. Its losses accelerated mainly because the company prioritized capturing market share over profitability. In mid-2021, about 38% of Russians made purchases on e-commerce platforms, compared to just 9% in 2020.

Ozon has proved in the past that its business model can be profitable, most notably in the fourth quarter of 2020. It typically charges a 5% commission on the gross merchandise value of items sold on its site, along with shipping fees. That is among the lowest within e-commerce retailers in Russia, leading to its enormous popularity. Though some items, such as medical devices, are charged up to 25% commission. One can purchase just about anything, including furniture, electronics, fashion items, medical devices, back-to-school items, and more.

Notable recent ventures include the rollout of the Ozon Card, allowing 5% cashback on purchases made on the platform. More than 1 million members are already using the service since its launch in December 2020.

The company has also operated Ozon Travel since 2017. More than 3 million train tickets and 22.9 million plane tickets have already been booked through the service.

But its greatest success is probably Ozon Express. Similar to Instacart, Russian customers can purchase food and have it delivered to their doorstep with Ozon Express. In the second quarter, Ozon Express accounted for 20% of all grocery purchases in the Moscow region.

The company's momentum is far from done. I believe it can sustain its growth through international expansion. Right now, almost all of its sales come from inside Russia, and that's about to change soon. Ozon had just begun its expansion into Belarus this year and plans to launch its platform in Kazakhstan by the end of the year.

Overall, Ozon is a solid e-commerce company that can become the Amazon of Russia with its conglomerate-like operating strategy and growth. Speaking of Amazon, the latter never gained much traction in Russia as domestic e-commerce sellers have the huge advantage of not needing to charge import duties and taxes on shipments. It's far cheaper to purchase from within the borders of the biggest country in the world. In addition, the Russian Federal Customs Service has a reputation for openness and efficiency, and bribes from buyers and sellers are not needed to make sure their parcels clear this department on time. So buying from foreign e-commerce platforms with no domestic fulfillment centers is pretty difficult.

But do beware of the geopolitical risks of investing in Russian stocks. In the past decade, Vladimir Putin's foreign policy has upset Uncle Sam and his NATO allies more than once, leading to retaliatory sanctions that sent the value of the ruble and the Russian economy plunging. But if you can stomach that volatility (with the aid of a few shots of vodka), it is a solid consumer goods stock for you.

Jumia Stock Is Soaring: 2 Reasons Ozon Is a Better Buy

2 High-Growth Stocks That Could Soar
376%