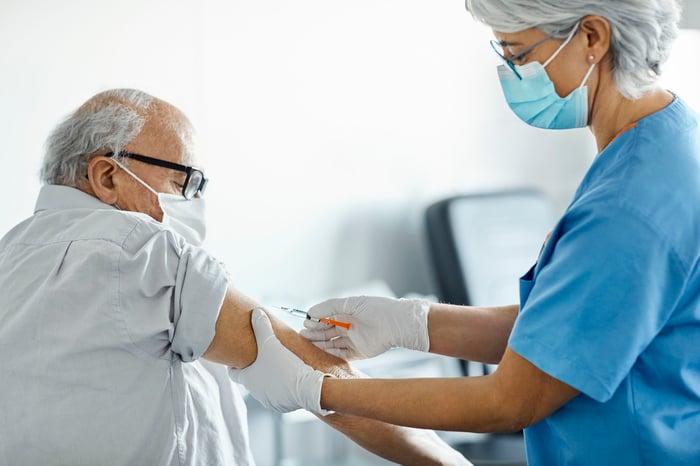 Sorrento had a series of positive announcements that drove up the stock. On Monday, the company said that its Sofusa technology, while delivering Enbrel (a drug marketed in the U.S. by Amgen) through the skin and lymphatic system, achieved a strong response in a phase 1B study against rheumatoid arthritis after 12 weeks. The key point was by using a different delivery system, the company got the result using 50% of the typical Enbrel dose.

On Thursday, the company announced it had promising preclinical results for STI mRNA, its mRNA (ribonucleic acid) vaccine as a therapy to fight COVID-19. Sorrento said the vaccine was able to produce cellular and humoral (body fluid) immunity in mice against the initial WA-1 virus as well as emerging variants, Alpha, Beta, Gamma, Delta, and Lambda. The key part of the findings was the company's MuVaxx lymphatic delivery system was 400% more effective using a tenth of the dose typically used in vaccines that are administered intramuscularly.

As a clinical-stage company looking for therapies to fight cancer and COVID-19, Sorrento isn't close to making a profit. In the second quarter, the company reported six-month revenue of $14.8 million, almost all of it from its subsidiary Scilex Pharmaceuticals and its lidocaine topical product, ZTlido, used to fight nerve pain associated with a type of shingles. The revenue was up 34.7% year over year, but overall, the company reported $164.3 million in net losses compared to $156.4 million in the first six months of 2020.

While the news regarding the biotech company's potential COVID vaccine is encouraging, bear in mind these are studies done on animals, in this case, mice, so the company is a long way from proving it will be effective and safe on humans.

However, in the long run, there is plenty to be excited about the stock. It has a growing pipeline that includes a saliva diagnostic test for COVID-19 that doesn't require a specialized machine or need to be administered nasally. If approved, the test would have wide potential applications.