Please ensure Javascript is enabled for purposes of website accessibility
Log In Help Join The Motley Fool
Free Article Join Over 1 Million Premium Members And Get More In-Depth Stock Guidance and Research
By Trevor Jennewine – Aug 27, 2021 at 7:15AM

Autonomous technology is the future, and NVIDIA is leading the charge.

Robinhood upended the finance world with commission-free trades and fractional shares, inspiring young investors to participate in the stock market. But the platform has also received a fair amount of criticism, as it's become somewhat synonymous with meme stocks and gamified investing. Regardless of which view you take, there are good companies to be found on Robinhood's Top 100 list.

For instance, NVIDIA (NVDA -1.16%) is a semiconductor company that plays an important role in emerging technologies like artificial intelligence (AI). Here's why investors should consider buying this Robinhood stock. 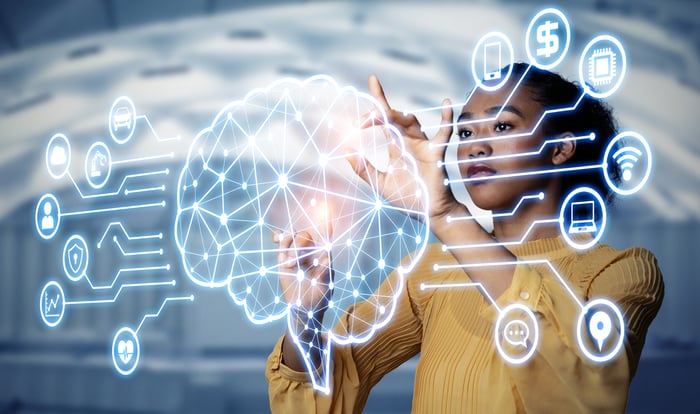 NVIDIA specializes in high performance computing (HPC). At the core of its platform is the graphics processing unit (GPU), a chip invented by the company in 1999. GPUs parallelize compute intensive code, meaning they can process lots of data very quickly. Originally, these chips were designed to render ultra-realistic gaming graphics, but they now play a critical role in accelerating data center workloads like artificial intelligence and analytics.

In short, NVIDIA's compute platform is an end-to-end solution for accelerated computing, inclusive of the hardware, software, and systems needed for cutting-edge graphics, complex scientific research, and all forms of artificial intelligence. Collectively, NVIDIA puts its market opportunity at over $125 billion by 2025.

Before buying a stock, you should always consider its competitive advantage. In other words, what separates this company from its rivals? And is that edge sustainable? In this case, NVIDIA's advantage stems from its intellectual property and first-mover status.

Not surprisingly, that dominance has translated into an impressive financial performance.

So far, we've checked several important boxes. NVIDIA has a big market opportunity, a strong competitive position, and an impressive financial history. But we still need to consider the future. What is the company doing to grow its business?

Collectively, these moves pave the way for NVIDIA to play a bigger role in the data center. The company already pairs its GPUs and DPUs in the DGX SuperPOD, a turnkey solution for enterprise AI. And the addition of a CPU next year should supercharge that dynamic.

Perhaps more noteworthy, NVIDIA is also expanding into the software-as-a-service (SaaS) market. The company recently introduced Omniverse, a platform that allows 3D creators to collaborate in a virtual environment. Omniverse also acts as a simulation engine, allowing engineers to train AI models for self-driving cars and autonomous robots. In short, NVIDIA sees this product as a stepping stone to the metaverse.

Likewise, NVIDIA recently launched Base Command, a cloud-hosted solution that provides on-demand access to AI development tools. And to complement this product, NVIDIA debuted Fleet Command, allowing clients to deploy and manage all of their AI applications from a single platform.

Collectively, NVIDIA's move into SaaS products should reduce the company's dependence on cyclical hardware sales, and help it capture more recurring revenue in the form of subscription fees. In short, NVIDIA appears to have a bright, profitable future. That's why I think this Robinhood stock is a smart long-term investment.