Palo Alto Networks' (NYSE:PANW) stock surged 19% to an all-time high on Aug. 24 after the cybersecurity company posted its fourth-quarter earnings. Its revenue rose 28% year over year to $1.22 billion, beating estimates by $50 million. Its adjusted net income increased 12% to $161.9 million, or $1.60 per share, which also surpassed expectations, by $0.16.

Palo Alto expects its revenue to rise 26% to 28% year over year in the first quarter of fiscal 2022, and to increase 24% to 25% for the full year. Both of those estimates exceed Wall Street's estimates. Its forecast for a 2% to 4% non-GAAP (adjusted) earnings-per-share decline in the first quarter of 2021 came in below expectations, but its forecast for 16% to 18% earnings growth for the full year still exceeded analysts' estimates. 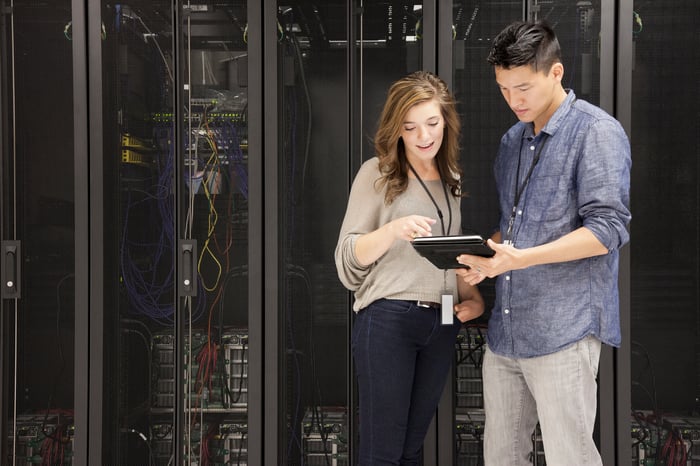 During the conference call, CEO Nikesh Arora attributed Palo Alto's robust growth to the escalation of cyberattacks worldwide, which highlighted the "constant shortcomings of enterprises and of government infrastructure." Palo Alto also authorized an additional $676 million for buybacks, which boosted its remaining buyback authorization to $1 billion through the end of 2022. Palo Alto's fourth-quarter growth and rosy guidance were impressive, but is it too late to buy this high-flying stock?

That acceleration can be attributed to Palo Alto's expansion of its NGS (next-generation security) services, which include its cloud security platform, Prisma, and its AI-powered threat detection platform, Cortex.

Palo Alto's earnings dipped in fiscal 2020 as it made several acquisitions to strengthen its NGS ecosystem, but those investments are paying off. It previously expected its annual recurring revenue from its NGS services to rise 77% to $1.15 billion for the full year. However, that figure actually hit $1.18 billion, or 28% of its full-year revenue.

That expansion could reduce Palo Alto's dependence on Strata, its older network security suite that's built upon its on-site firewall appliances; widen its moat against cloud-native challengers like CrowdStrike Holdings (NASDAQ:CRWD); and enable it to cross-sell more services to its existing customers.

More than three-quarters of the Fortune 100 companies are already using Palo Alto's cloud security platform, which consists of seven modules. Arora noted that many of its customers had "gone from zero to seven modules" to strengthen their cybersecurity defenses in a rapidly changing market.

Expanding its ecosystem at a sustainable rate

Palo Alto spent nearly $3 billion on acquisitions over the past two years. Despite the spending, its non-GAAP operating margin and adjusted free cash flow (FCF) margin still expanded in fiscal 2021:

The bears might claim that Palo Alto relies too heavily on acquisitions to keep pace with cloud-native rivals like CrowdStrike, but 53 of its 64 product releases over the past three years were actually developed organically. Only 11 products were added through acquisitions.

During the conference call, Arora reiterated Palo Alto's commitment to the "speedboat" model it introduced three years ago -- which prioritizes the installation of new growth engines to counter the competition and incoming headwinds. However, Arora also expects its improved scale and the optimization of its cloud spending to "create margin expansion over the long term."

Based on these facts, Palo Alto's expansion looks smart and sustainable -- even if its high stock-based compensation expenses (12% of its revenue in fiscal 2021) prevent it from turning profitable on a GAAP basis. The company plans to reveal more long-term goals at its upcoming investor day on Sept. 13.

It isn't too late to buy Palo Alto Networks

Back in January, I chose Palo Alto as my top cybersecurity stock for the year because it offered a great balance of value and growth. Palo Alto's post-earnings gains haven't altered that thesis one bit.

CrowdStrike is growing faster than Palo Alto, but a lot more growth has been baked into its frothy stock price. Palo Alto's valuations are more reasonable relative to its growth and indicate it could still have plenty of room to grow. Simply put, it's not too late to buy Palo Alto -- even at its all-time highs.