When it comes to selling sports apparel, Nike (NYSE:NKE) reigns supreme. The Oregon-based company has a global presence, and its endorsements of famous athletes have led to powerful brand recognition and prestige. Revenue in its most recent quarter topped $12.3 billion, and the stock historically has been a big winner, rising nearly eightfold over the past decade.

A much smaller competitor, however, possesses some key advantages compared the sportswear giant. Lululemon Athletica (NASDAQ:LULU), which carries roughly one-fifth the market capitalization of its larger peer, can outperform Nike in three important areas. 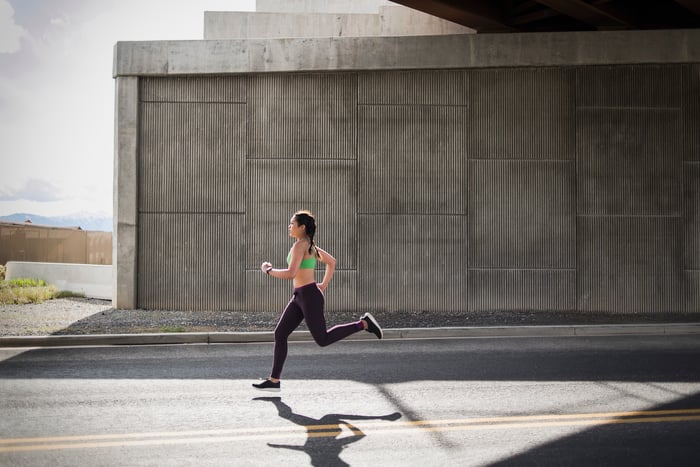 In the fiscal 2021 first quarter, Lululemon's e-commerce sales exhibited strong growth even as the brick-and-mortar sector opened back up. Revenue increased 55% year over year with the direct-to-consumer channel accounting for 44% of the top line, down from 54% in the prior-year period when consumers were stuck at home.

Nike trails meaningfully behind, as its digital sales made up just 35% of its business as of its fiscal 2021 fourth quarter. On the latest earnings call, Nike CEO John Donahoe mentioned his eventual goal: "We believe we will achieve 50% digital mix of business across owned and partnered in fiscal year 2025." Meanwhile, Lululemon achieved that mix last year.

Conducting more business via direct to consumer helps Lululemon build up its brand image, because items stay at full price longer. And not having products sold at third-party retail chains cuts out a costly middleman, which boosts the company's margins.

Keeping more of each sale

And speaking of margins, Lululemon takes the cake here too. Its gross margin has consistently beat Nike's over the years -- and by a wide margin -- as you can see below. 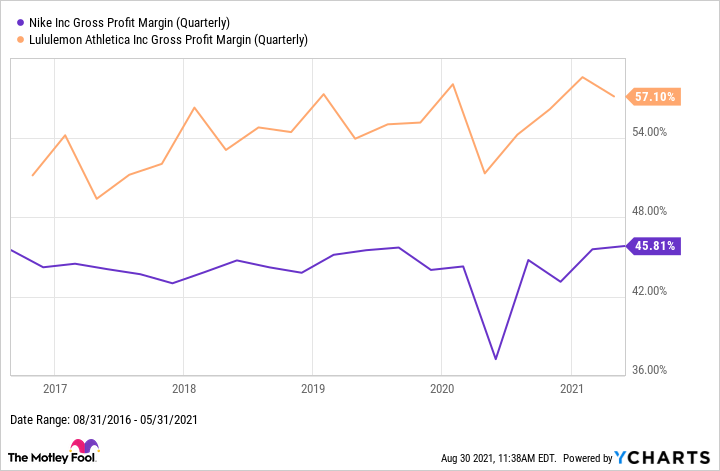 This point ties into the previous section. In addition to selling its popular footwear and apparel on its own website, apps, and physical stores, Nike relies on retailers like Dick's Sporting Goods, Foot Locker, and Hibbett to push inventory. Lululemon products, on the other hand, are primarily offered on the company's website or at one of its 500-plus branded stores, leading to stronger pricing power.

For all of fiscal 2021, Lululemon plans to open 35 to 40 stores in international markets (out of 45 to 55 total), demonstrating the sizable growth opportunity that exists outside of North America. CEO Calvin McDonald highlighted his confidence on the latest earnings call: "I can see a time in the near future where our international business grows in size to be equal to our North America business."

Lululemon is making solid progress toward that goal. The company generated 14% of revenue overseas in fiscal 2020. There's plenty of room for that part of the business to run. Just in the last quarter, international sales (up 125%) growth exceeded gains in North America (up 82%).

In the three months ended May 31, more than half of Nike's sales were outside North America. This shouldn't surprise anyone, though, as Nike is an undisputed global icon. Lululemon may not have the same reach, but that also means it has a long runway to expand abroad.

Nike has been an industry giant for decades, combining the world's love of sport and fashion, but the smaller Lululemon is only just beginning to build out its global footprint. Growth-hungry investors should be paying attention.