Please ensure Javascript is enabled for purposes of website accessibility
Log In Help Join The Motley Fool
Free Article Join Over 1 Million Premium Members And Get More In-Depth Stock Guidance and Research
By Parkev Tatevosian, CFA – Aug 31, 2021 at 9:55AM

The popularity of sports is expanding, and this company is in a position to capture that tailwind.

It's not hard to see evidence of the popularity of sports. Walking your dog in your neighborhood, you can see people wearing caps or t-shirts with their favorite team's logo. At work, it's easy to find someone who saw the incredible play from the game last night. Sports fans are all around us. But are there ways we can invest in this popular pastime?

One option is to consider buying stock in fuboTV (FUBO -3.23%). The company offers a sports-centric streaming TV product that replaces cable TV. And later this year, fuboTV will be launching a mobile sportsbook. Both business plans have the potential for growth that should boost the stock long-term. 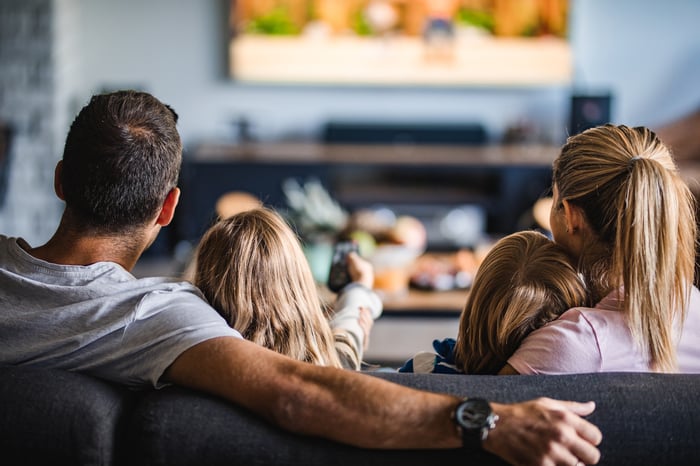 According to Statista, the North American sports market (basically gate revenues, media rights, sponsorships and merchandising) was estimated to be worth $71 billion in 2018. That's expected to grow to $83 billion by 2023. The size of that market (and it's just in North America) clearly shows people like sports and are willing to pay to watch and support their teams.

The largest segment within that is the media rights market, where radio, internet, and television broadcasters pay for the rights to distribute events. Broadcasters pay for the privilege to distribute events because they attract viewers. That's where fuboTV comes in. It has been lining up broadcasting rights to events sports fans want to see and that is attracting subscribers.

According to its latest report, it has attracted 682,000 paying subscribers, an increase of 138% from the year before. Those customers generate an average revenue of $71.43 per month. Fans are increasingly looking to fuboTV to watch their favorite team's games, and the company expects this to continue.

Additionally. fuboTV makes a good investment because it is a streaming content provider. Unlike traditional cable subscription providers experiencing losses as consumers prefer to stream content, fuboTV is on the right side of that long-run secular trend away from cable and toward streaming.

But it is not alone. Business giants Alphabet (through YouTube TV) and Walt Disney (through Hulu and ESPN+) offer a similar live TV product. fuboTV is aiming at carving out a niche for itself with sports fans and it remains to be seen if it can compete in a market with such heavy hitters.

Wagering on a game makes it more interesting to watch

Because fuboTV's audience has a sports focus, the company is launching a mobile sportsbook later this year. It will be a complementary addition to its product. Sports fans are the most likely to make wagers on games, so it makes intuitive sense to launch a mobile sportsbook for fuboTV.

Its product will be differentiated in the market by a unique interactive feature. Viewers will get an overlay on their screen of betting options for the game they are watching. The options will change as they change the channel to a different game or sport. Depending on how well it functions, it can be an advantage against other operators who will require bettors to take their phone out and make several clicks before making a wager.

Still, the gaming market is full of regulatory hurdles and risks. The company needs to apply for licenses state-by-state to gain access to providing these gambling services and it faces competition for those licenses. It is far from certain that it will get approval to operate everywhere it wants (or needs) to in order to be profitable.

In the company's most recent conference call, CEO David Gandler said: "As we've cited previously, our strategy is rooted in the intersection of three megatrends: the secular decline of traditional television, the shift of TV ad dollars to connected devices, and online sports wagering, a market opportunity which we believe complements our sports first live TV streaming platform."

If you're bullish on the long-run potential for the sports industry, then fuboTV stock is in a good position to benefit from that trend. Keep in mind, the company is a growth stock that is investing heavily in expanding its streaming services and building out its mobile sportsbook. That means it has yet to achieve profitability and likely won't anytime soon because it is ramping up its operations in so many places and in various ways. You are investing in fuboTV's potential to make a profit somewhere down the road.

The stock is not cheap either, trading at a forward price to sales ratio of 6.9. That being said, the company is growing fast enough -- even before launching the mobile sportsbook -- to make the valuation worthwhile.

This Beaten-Down Stock Has a Big Problem on Its Hands. Should Investors Worry?

Is fuboTV Stock Ready to Win a Game It Didn't Want to Play?
356%