No matter what your financial goals, doubling your money always helps. In investing, it's easy; it just takes time. We asked three Motley Fool contributors to help identify the healthcare companies that are most likely to realize that goal over the next half-decade. They suggested Align Technology (NASDAQ:ALGN), Intuitive Surgical (NASDAQ:ISRG), and GoodRx (NASDAQ:GDRX). Here's why. 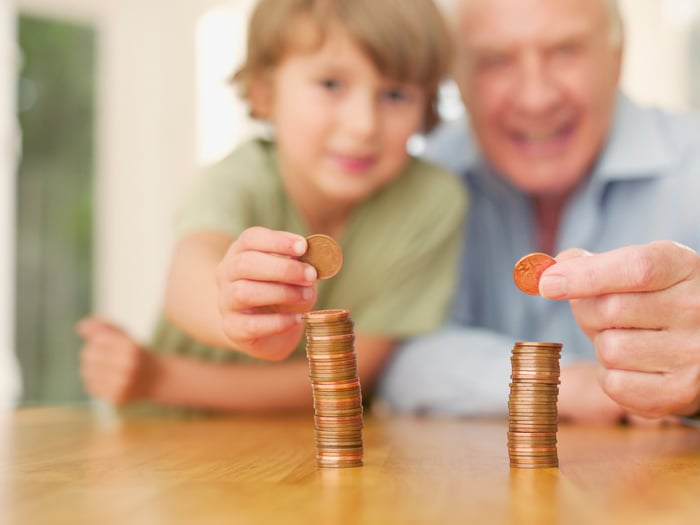 Wall Street can't keep up with the growth

Jason Hawthorne (Align Technology): There's a simple reason I think Align Technology, a maker of clear teeth-straightening systems, could double your money in the next five years: The company is growing into an enormous market, and Wall Street can't seem to keep up.

Beating expectations might be the most important catalyst for a stock to beat the broad market over time. Here's how those expectations for earnings per share have fared over the last year. Let's see if you can spot the pattern.

Over the past three quarters, the company has handily beat analyst estimates. The third quarter of last year was a wild card coming out of the first wave of the pandemic. Similarly, current expectations for sales aren't giving the company enough credit for its recent performance.

Of the analysts who cover the stock, one-third have a rating equivalent to hold or sell. The average expectation for revenue this year is $3.93 billion; it's $4.76 billion for next year. Align should easily clear those bars unless something unexpected happens.

For context, the company averaged 26% revenue growth for the five years before the pandemic. After the first six months of this year, Align has already put up $1.91 billion, 66% more than 2019. If it keeps up that pace for the final two quarters of the year, it would post almost $4 billion in 2021 revenue. Just following the pre-pandemic growth rate (which it has been exceeding) would put Align over $5 billion for next year.

Doing the math, investors can see for themselves that Wall Street is still underestimating the company. It's hard to believe with the stock already up 135% in the past year. It can seem counterintuitive to buy a stock at all-time highs, where Align Technology sits now. But the best way for a stock to double your money is for it to keep blowing away expectations. Eventually, Wall Street will catch up.

Rachel Warren (Intuitive Surgical): My pick for this roundup is the hands-down leader in medical robotics. At the time of this writing, Intuitive Surgical holds about an 80% slice of this entire market. And keep in mind that this industry is expected to hit a valuation of about $17 billion worldwide over the coming decade.

If you're looking for a healthcare stock with serious potential to double or more in just five years, Intuitive Surgical is a likely contender. In the trailing-five-year period, the stock has more than cleared the goalpost of doubling its shares, having gained over 360% during the past five years. But let's go back even further: Intuitive Surgical became a publicly traded company in 2000, when it debuted at $9 a share. Since then, the stock has appreciated by (wait for it) 17,316%.

Management recently announced that the stock would undergo a 3-for-1 split at the end of September. This is subject to shareholders giving the stock split the green light, which is broadly expected to occur. Assuming the stock doesn't move too much from where it's currently trading (approximately $1,060 per share), this would put it more in the ballpark of $350 per share once the split goes through.

Intuitive's notable stock performance over the years has also paired with stellar top- and bottom-line growth. Although the company's financials took a hit in 2020 because of fewer sales of its da Vinci surgical systems, it has gained considerable ground in 2021.

In its most recent quarterly report, management said that revenue jumped 72% year over year and net income popped 660% from the year-ago period. Procedures using the company's da Vinci surgical robot increased 68% from the second quarter of 2020, while shipments of these systems to customers surged 84% year over year.

Intuitive Surgical's dominance of its industry and proven ability to deliver strong financial growth have translated to steady share price appreciation. Even though the healthcare stock could be splitting soon, given its impressive performance up until now, investors could easily see the company jump back to its current trading price and higher over the next several years alone.

Monetizing all sides of a network

Steve Ditto (GoodRx): In a perfect world, GoodRx wouldn't exist. But healthcare is far from perfect, and GoodRx has carved out a key role by creating a marketplace delivering value to all the stakeholders in the $359 billion prescription drug market.

The key word in this description is "marketplace." GoodRx is not a storefront or reseller. Similar to eBay, the GoodRx marketplace brings together buyers and sellers. The great thing about marketplaces is that they can create a virtuous cycle: More buyers means more competition from sellers, which leads to lower prices.

In the case of GoodRx, the lower prices are compelling. In 2020, its users saved an average of 79% off retail prices, and over 55% of prescriptions filled using GoodRx were cheaper than the average commercial insurance co-pays for the 100 most-purchased medications.

In the second quarter, GoodRx reported 6 million monthly active consumers, growing by 36% year over year. Revenue was $176.6 million, growing 43% year over year. In a sign of good things to come, revenue from drug manufacturer programs and telehealth increased by 136% to $17.4 million.

One issue hanging over GoodRx has been the threat of competition from Amazon (NASDAQ:AMZN). Although you can't fully discount Amazon in healthcare, all indications are pointing to this potential threat as being overblown. Amazon has essentially created a mail-order pharmacy and is generally higher priced than GoodRx.

With a price-to-sales ratio of 22 compared to 3.25 for the S&P 500, GoodRx is not a low-priced bargain even after falling almost 43% from its 52-week high. However, it has cemented itself into a huge market, is attracting buyers and sellers to its marketplace, and has developed attractive ways to monetize its position. By continuing to grow at more than 30% per year, GoodRx has every chance to double or more within the next five years.

For patient buy-and-hold investors, GoodRx should be a good prescription for your portfolio.