Shares of Lucid Group (LCID -0.91%) are getting pummeled today. The most likely reason for the sell-off is the expiration of a lockup provision for early-stage private investment in public equity (PIPE) investors. Lucid also published a press release yesterday detailing a production preview of its Advanced Manufacturing Plant (AMP-1) facility for the week of Sept. 27.

Let's break down these two events to see what they mean for Lucid and where the company could be headed from here. 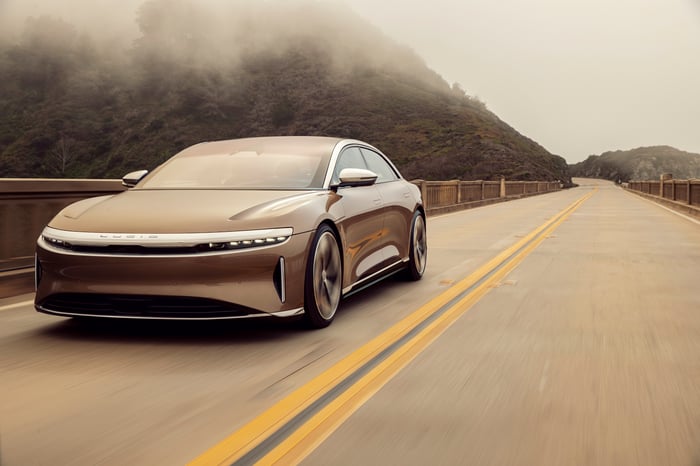 Panic from the PIPE

Upon merging with a SPAC called Churchill Capital IV in late July, Lucid received $4.6 billion in cash ($4.4 billion net of expenses) funded by $2.1 billion in cash from Churchill and $2.5 billion from the PIPE at $15 per share. Churchill was initially going to get just $10 per share from PIPE investors but was able to get them to commit to $15 per share due to investor optimism and a once-surging share price. The largest PIPE investor is the Saudi Arabia sovereign wealth fund. Other notable names are BlackRock, Fidelity, and Franklin Templeton.

Monday, July 26, marked the date when Churchill officially merged to form Lucid Group. After rising as high as $29 per share at one point on July 26, shares of Lucid have been trending lower. Despite the sizable decline, it appears that certain PIPE investors may have chosen to sell shares for a profit -- albeit a much lower profit than they could have gotten if the share price had been where it was just a few weeks ago.

Downward pressure from large shareholders has the ability to move a stock's price a lot lower. In Lucid's case, the combination of what is likely institutional selling and an already-sliding stock price seems to be producing a snowball effect. Investors unwilling to let Lucid's multiyear investment thesis play out might prefer to sell now to avoid further pain.

Possible panic from PIPE investors may explain today's price action. But the reason for Lucid's slipping share price over the last month likely has to do with an uncertain production timetable.

For months, Lucid has been assuring investors that it will begin mass production and delivery of the Lucid Air Dream Edition, the most expensive trim of its luxury sedan, sometime in the second half of 2021. With August now in the rearview mirror, the clock is ticking to make good on that promise.

Lucid gave investors helpful production and technology updates in its July 13 presentation. But the one question it didn't answer was when it would transition from preproduction to mass production.

Yesterday's Lucid press release said that the company plans to open doors to its new production facility in Casa Grande, Arizona, for the first time. Certain customers, media, policymakers, and financial communities will catch a glimpse of Lucid's technology and be able to test-drive the Lucid Air. The company's decision to open its production facility to the media indicates that it has nothing to hide and could be close to mass production. However, it also seems to hint that the EV company will not enter mass production in September, pushing the "second-half 2021" goal to the fourth quarter at the earliest.

Despite this uncertain timeline, Lucid is a company packed with potential. It has successfully landed 11,000 reservations across its Air product line. In addition to four Lucid Air trims, it plans to roll out a luxury SUV called the Lucid Gravity in late 2023.

Lucid lacks the first-mover advantage that EV kingpin Tesla (TSLA -1.14%) got years ago. But there are advantages to scaling in today's business environment. For example, Lucid doesn't have to outlay tons of capital to build its own fast-charging network because public charging infrastructure should continue to grow well into the future.

Last Wednesday, Motor Trend's Jonny Lieberman released a positive review of the Lucid Air Dream Edition R (R stands for Range), a good sign that Lucid's underlying technology is competitive. Lucid develops its integrated powertrain in-house, sporting a battery efficiency that's even better than that of the Tesla Model S. The power, range, features, and design that the company has come up with are impressive. That's not the problem. The problem is whether sales can grow and Lucid can eventually reach profitability.

The narrative over the last few months has been that Lucid has the potential to be successful. But designing a great car and mass-producing it are two completely different skills. Wall Street hates uncertainty. Each passing month that Lucid fails to enter mass production further justifies doubt.

Large institutional selling for a slight profit, or maybe even a loss, is a sign that early investors no longer have the patience to let Lucid's dreams become a reality. Aside from late September's production preview, there's little for investors to smile about for the time being.

Lucid's long-term potential remains intact, but its share price could continue being extremely volatile until Wall Street gets the update it's looking for. Those interested in snagging a slice of an up-and-coming growth stock can now do so for a discounted price -- keeping in mind that it could take years for the story to play out.