Please ensure Javascript is enabled for purposes of website accessibility
Log In Help Join The Motley Fool
Free Article
Join Nearly 1 Million Premium Members And Get More In-Depth Stock Guidance and Research
By Will Healy – Sep 2, 2021 at 6:57AM

International Business Machines (IBM -0.33%) continues to transform itself into more of a cloud company. It has increasingly stood out as a hybrid cloud leader since acquiring Red Hat in 2019. Additionally, the spinoff of its managed infrastructure services business could free IBM to focus more exclusively on that growth.

Nonetheless, while IBM offers investors many reasons to buy, one key challenge could deter some investors in the near term. 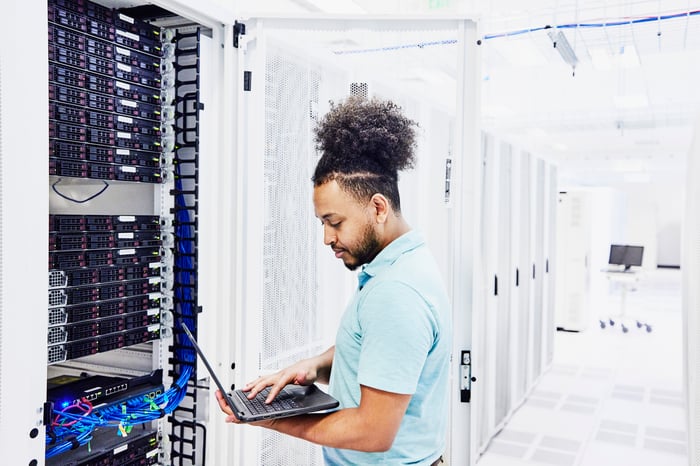 Reason to buy: The spinoff opportunity

Despite IBM's chipmaking breakthroughs and supercomputing innovations, the cloud is its fastest-growing segment. CEO Arvind Krishna has sought to remake IBM as more of a cloud player since taking the leadership position in April 2020. He played a significant role in the Red Hat acquisition, and Red Hat's Kubernetes and OpenShift software could simplify the communications problems inherent in making public and private clouds work with one another.

Moreover, IBM's spinoff of Kyndryl should further this transition, and IBM shareholders will receive some Kyndryl shares at the time of the spinoff. While this may look like a convenient way to offload an underperforming business, Kyndryl brings with it a $60 billion backlog. This workload gives Kyndryl a chance to orchestrate a turnaround under an executive team focused solely on the managed infrastructure business.

Despite its revenue growth struggles, IBM continues to excel in generating cash. Over the last 12 months, it reported a free cash flow of about $9.7 billion, enough to easily cover the $5.8 billion in dividend costs over that period.

This dividend has long served investors well. It now pays shareholders $6.56 per share annually, a cash return of around 4.7% at current prices. This is significantly higher than the 1.3% currently returned by the S&P 500.

IBM's cash flows are critical for another reason. IBM holds a current debt of $55.2 billion, a massive burden when stockholders' equity amounts to just over $21.9 billion. Nonetheless, while this remains a strain on the balance sheet, stockholders should remember that the company has reduced debt by $6.4 billion over the last 12 months. It has also cut these obligations by $17.9 billion since the Red Hat acquisition in 2019.

This is significant because the Red Hat purchase cost IBM $34 billion. In Q2 2019, the company increased its total debt by $23 billion in one quarter to cover the cost of the acquisition. Hence, it has now paid back all but $5 billion of its debt from the Red Hat deal.

Unfortunately, questions remain about how each balance sheet will look following the spinoff. For one, IBM has not revealed how it will partition the remaining debt load between the two companies. This is important, as an inequitable split could compromise the balance sheet of at least one of the companies.

Additionally, the questions stretch well beyond debt levels and the state of IBM's stockholders' equity. While the company has told shareholders that they will receive some Kyndryl stock, they have little visibility on the number of shares they will receive. Also, IBM has not broken out the portion of revenue, net income, or free cash flow generated by Kyndryl or how that affects stockholders on a per-share basis. Such uncertainty about its valuation comes at a time when IBM's P/E ratio has climbed above 23, a level it has not seen since 2018.

Furthermore, the uncertainty is particularly significant for IBM's dividend-focused investors. IBM has told shareholders the two companies will split the payout. Thus investors cannot precisely measure each company's future income or their ability to maintain whatever portion of the dividend they receive.

Should I consider IBM?

Despite the unanswered questions, both companies should perform better as separate entities. As more of a cloud company, IBM's massive growth in this niche should wield more influence over its stock. Moreover, Kyndryl probably has a better chance to turn the massive backlog into rising revenue, with managed infrastructure becoming its only priority.

However, income investors face deep uncertainty since they do not know which part of the business will lend the most support to the payout. For this reason, this class of investors should consider staying on the sidelines until more information comes to light.