The investment case for this fast-growing industry leader speaks for itself.

Warren Buffett's conglomerate, Berkshire Hathaway (BRK.A -0.63%) (BRK.B -0.62%), owns a massive stock portfolio worth more than $300 billion. Unsurprisingly, much of the attention surrounding it goes to Apple, which is by far Berkshire's largest holding and has performed remarkably well over the past few years.

Coming in second is Bank of America, a huge financial institution serving consumers and corporations all over the world. This large bank stock has done well for Buffett, easily beating the S&P 500 since Berkshire bought its first stake in 2011.

But if you're thinking of following Buffett's lead and making Bank of America your biggest financial industry holding, I've got a stock that's even better. As good an investment as the megabank has been, it pales in comparison to the quality of fintech pioneer PayPal Holdings (PYPL -0.56%). Here's why I think investors would benefit from considering this digital payments behemoth -- and why it should appeal to Buffett himself. 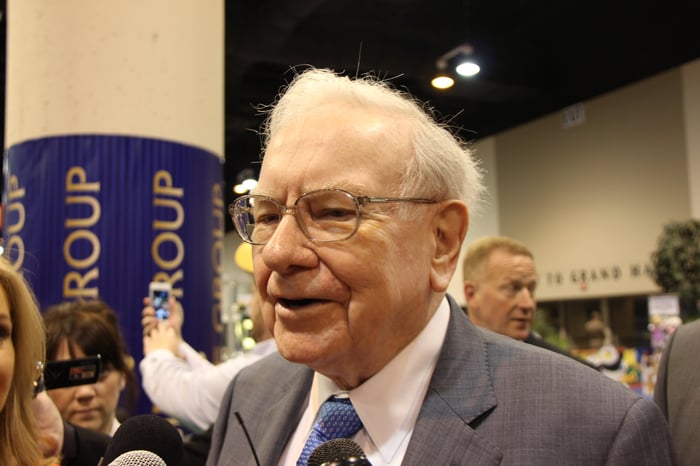 PayPal's stock has soared nearly 700% over the past five years. This compares to a less exciting 157% price appreciation for Bank of America, and it demonstrates both the superiority of PayPal's business and the potential of the industry it serves.

Both of these companies have strong competitive advantages, including well-known brands, high customer switching costs, and scale advantages. But PayPal stands out first because of its massive and growing network effect: the more people use PayPal's platform, the more want to join, and the more valuable that platform becomes. As of the most recent quarter, PayPal had 32 million active merchants and 371 million active consumers on its platform. It would be extremely difficult for any business to replicate what PayPal has built. Just last quarter, the company processed a whopping $311 billion in transaction volume. Bank of America serves 66 million consumer and small business clients today. That's up from 47 million five years ago, but not anywhere close to PayPal's scope.

Second, while traditional banks like Bank of America work in a mature and fairly commoditized industry -- one bank isn't much better than another to most consumers -- PayPal's success came from filling a significant void in the financial services industry. Merchants desired a simple, turnkey solution to accept payments online that they just weren't finding elsewhere. And consumers, already with a limitless number of banking services to choose from, wanted a safe, secure, and easy-to-use tool to help with their daily financial lives.

Another very important advantage that PayPal has can be found by looking at its balance sheet. Because the fintech business is primarily a payments processor, its credit risk is substantially lower than Bank of America's. To elaborate, as of June 30, PayPal's $74 billion in assets consisted of just over $3 billion in outstanding consumer loans. Bank of America, on the other hand, unsurprisingly has an enormous $3 trillion balance sheet, which is made up of more than $900 billion in loans. Being less influenced by interest rates naturally makes PayPal less sensitive to macroeconomic factors.

Even though Buffett has been notoriously tech-averse as an investor, he knows an economic moat when he sees one. While Bank of America has been a high-class performer in its industry, PayPal has been a leader in a very lucrative one.

Further cementing PayPal's superiority is that its growth has far exceeded the banking giant's. Sales over the past five years have increased at a rate of 15% or better per year, while profit tripled during that time. It's no wonder the stock has done so well.

PayPal is riding the secular shift away from cash and toward digital payments. As a higher percentage of commerce is done online, the business stands to keep flourishing. CEO Dan Schulman believes PayPal can one day amass 1 billion daily active accounts. And the company's ability to introduce new and innovative products, like QR codes at merchants, checking out with crypto, and the popular buy now, pay later purchasing option, all strengthen its value proposition for users.

Management is expecting PayPal's revenue and earnings per share to rise 20% and 21%, respectively, in 2021 compared to the prior year. And the company is well on its way to easily surpassing $1 trillion in total annual payment volume, which is an extraordinary feat in and of itself. Active accounts are forecasted to end the year at 430 million.

PayPal's stock trades at a premium valuation, commanding a forward price-to-earnings ratio around 56 as of Wednesday's close. But as I've laid out above, the price might be worth it. Enticing potential investors more is the fact that the stock fell after second-quarter earnings and remains down 5% since that July 28 announcement.

When you stack up PayPal's investment merits with one of Buffett's largest holdings, Bank of America, it's easy to see which company has the upper hand. The thriving fintech leader is the clear winner, in my opinion.