Shares of ASML Holding (NASDAQ:ASML) rose 10.3% in August, according to according to data from S&P Global Market Intelligence. There wasn't much new company-specific news for ASML last month, as the company had already reported strong earnings at the end of July. However, an announcement from key customer Samsung was the likely factor behind ASML's August rise.

In August, Samsung announced it was raising its capital spending plans to $205 billion over the next three years, an increase of 33% over the prior three years. Samsung is aiming to catch up to Taiwan Semiconductor Manufacturing in leading-edge chip manufacturing capabilities, and is sparing no expense to do it. The stakes are so high that the Korean government released Samsung leader Lee Jae-yong from prison earlier than expected due to "economic factors." Likely, some feel his imprisonment has played a role in Samsung losing ground to TSMC in recent years in the key field of leading-edge semiconductor manufacturing. 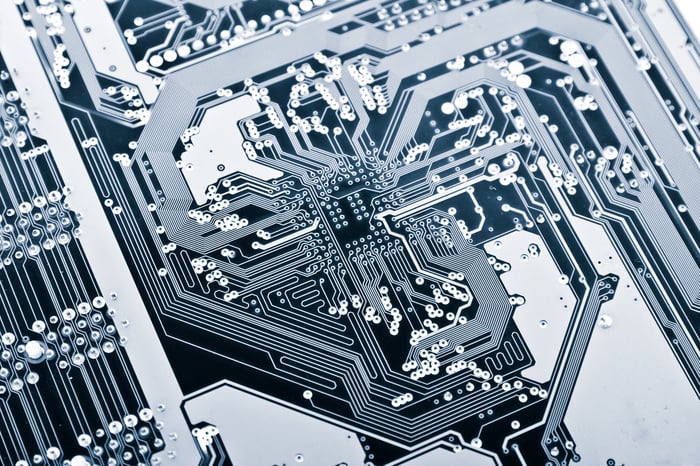 In any case, more spending from the world's leading foundries means more revenue and profits for ASML, which is the world's sole provider of Extreme Ultraviolet Lithography machines. EUV is a complex technology that enables the efficient scaling of leading-edge chips at 10 nanometers and below. In addition to EUV, ASML is also a large player in traditional DUV lithography, metrology, and inspection tools that are also needed to make today's smallest and most powerful semiconductors.

While the Samsung announcement was the main reason for the stock's rise, ASML also formally opened its new Silicon Valley research and development center last month. The Netherlands-based ASML has had a presence in the Valley for years, but this campus is a big step up in capacity and features that should attract more top U.S. engineering talent.

ASML is not a cheap stock at roughly 52 times forward earnings estimates; however, it has never looked cheap over the past few years, yet the stock has still gone on to market-trouncing returns. With the current chip shortage and ongoing rise in long-term spending plans announced by the world's leading chip foundries, years of solid growth, buybacks, and rising dividends appear all but guaranteed for ASML shareholders.