After playing possum for most of the morning, shares of newly-public space company and occasional defense contractor Rocket Lab USA (NASDAQ:RKLB) took off like (what else?) a rocket in afternoon trading Thursday.

By the time markets closed for the evening, Rocket Lab shares were up 14.7%. 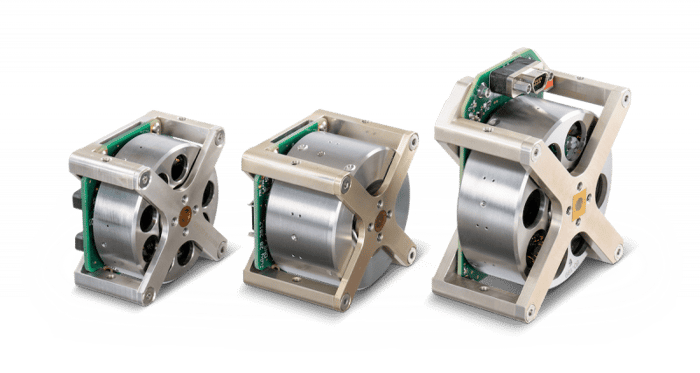 These are reaction wheels. Now let us tell you why they're important. Image source: Rocket Lab.

Rocket Lab's rise began with a press release yesterday evening. The company, which went public through a merger with a special purpose acquisition company, announced that it has begun construction of a factory that can build up to 2,000 reaction wheels per year "to fulfill growing demand from satellite constellation customers."

This press release raised a couple of questions: First, what is a reaction wheel? And second, is there any significance to the number 2,000?

According to satsearch.co, the answer to the first question is that reaction wheels are satellite parts that "store rotational energy" and use it to control a satellite's attitude with very high precision. In short, they're part of a small satellite's guidance system. And according to Rocket Lab, small satellites are generally equipped with three or four reaction wheels per satellite: one to control each axis of rotation (x, y, and z), sometimes with a fourth wheel acting as a spare.

A little elementary math, then, will tell you that if Rocket Lab is building a factory to produce 2,000 reaction wheels per year, then it must be anticipating demand for at least 500 satellite launches annually.

Given that Rocket Lab has so far launched only 105 satellites over the four years that it has been doing so, the fact that the company is gearing up to be able to launch 500 satellites a year suggests a very big increase in the rate of Rocket Lab's satellite launches.

So in a nutshell, Rocket Lab stock went up so much today because it's growing -- and probably a lot bigger, and a lot faster, than a lot of investors anticipated.