Please ensure Javascript is enabled for purposes of website accessibility
Log In Help Join The Motley Fool
Free Article Join Over 1 Million Premium Members And Get More In-Depth Stock Guidance and Research
By Jason Hawthorne – Sep 4, 2021 at 6:30AM

The math works if everything goes right.

Shake Shack (SHAK 0.55%) started as a New York hot dog stand in Madison Square Park. It was the brainchild of Danny Meyer, best known as the restaurateur and CEO of Union Square Hospitality Group. The restaurant was founded three years later, in 2004.

It has managed to spruce up an old-school menu, propelling the New York City concept into an internationally recognized brand. But it's just getting started. In fact, there is a way it could be 10 times larger in 10 years. Here's how. 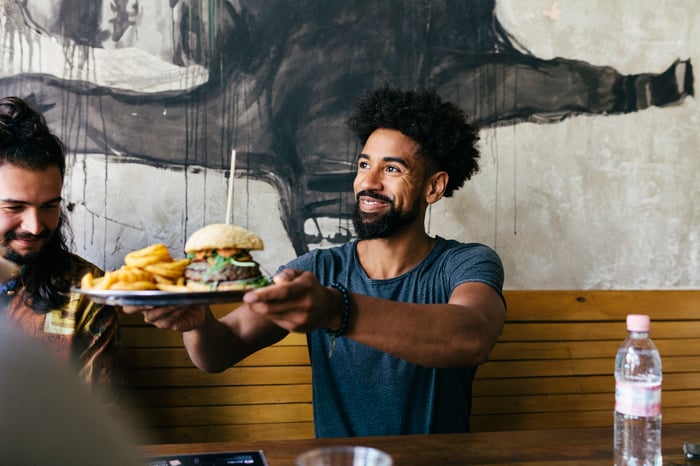 Simple and good is the magic formula

Shake Shack follows in the footsteps of another fast casual champion -- Chipotle Mexican Grill (CMG 0.82%) -- by keeping its menu simple and natural. Burgers, hot dogs, and fries are the mainstay. Add in chicken and mushroom burgers for those avoiding red meat, and you would be forgiven for thinking it was like every other fast-food burger joint. But it's so much more.

First, it has exclusive items like the Shackmeister beer Brooklyn Brewery created to compliment the burgers. The company leaned on its high-end restaurant roots to develop an exclusive red and white wine. It even mixes in the regional flavor by offering local craft beers and desserts. Who could resist the key lime custard in the Boca Raton, Florida, Shack? Some Shacks even serve breakfast.

The company also expertly mixes in limited-time and exclusive offers. Prime examples are its hot chicken bites or the recently announced partnership with New York's famous Milk Bar on milkshakes flavored like birthday cake and cornflakes.

Shake Shack also understands what buyers want these days. Its menu is focused on being all-natural -- avoiding protein from animals that have been given hormones and antibiotics. Even its shakes use pure sugar instead of corn syrup and milk from farmers who pledge not to use artificial growth hormones. It's a formula that has resonated around the globe.

Getting the model right

Of the 339 Shacks, more than one-third are outside the United States. For those locations, it employs a licensing strategy that is low-cost and high-return. It also licenses locations domestically for sites such as airports and stadiums. The international growth is broad-based, but management has highlighted Asia -- particularly China -- as an opportunity. It is planning an eightfold increase in the number of Shacks operating in that country over the next decade.

Adding locations has been a big part of the company's growth since it went public in 2015. The number of stores has climbed faster than revenue, and adjusted earnings before interest, taxes, depreciation, and amortization (EBITDA) -- a proxy for cash flow -- has declined.

On paper, it looks as if the company is burning money by opening new stores. Adjust for the pandemic and investments in expanding the footprint, and things start to look a little better. From 2016 to 2019, Shake Shack grew cash from operations by 66%. Right now, the stock is nearly as cheap as it has been in the past year, based on projected sales. 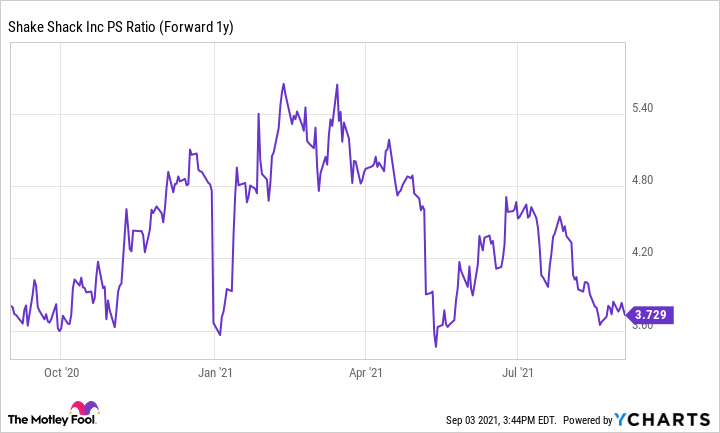 There's value in the name and concept

Early on, the company said it was targeting about 450 company-operated stores. It's already at 200. That might make it seem as if growing tenfold is a tall order. But I believe it can grow beyond that target domestically. Regardless, the bulk of its future lies in the licensed stores, especially those outside the United States.

After all, there are 250 cities with a population of at least 2 million -- and more than 98% of them aren't in this country. That could offer a long runway of growth. And it's essentially all profit, since the company isn't operating the restaurants. The economics were consistent before the pandemic, averaging about $180,000 per location.

To see how Shake Shack could grow 1,000% in the next decade, we'll start with some math. There are 10 cities in the U.S. with more than 1 million people, if you don't count New York. The latter is a special case, because the company's presence is especially dense in its hometown. Those other 10 cities already have an average of 3.4 Shacks per million people.

The company has said it plans to have 55 stores in China by 2030. I suspect that's a conservative target. CEO Randy Garutti has said the company plans to open as many as 40 locations in Asia this year and as many as 50 next year. Still, the numbers offer a good proxy for the rest of the world. For China's most populated cities, it works out to about one store per 4 million people.

For the rest of the world's largest cities, that ratio would mean another 175 stores globally. That's far less than the pace of development Garutti is promising. Splitting the difference between what he says and what the company is doing results in about 290 licensed international stores by 2031.

Domestically, Shake Shack will have to top its early goal in a tenfold scenario. If it can get close to two stores per million people living in U.S. cities over the next decade, it could top 500 domestic restaurants. Adding in the international stores -- and doubling domestic licensed locations -- gets the company to as many as 840 Shake Shacks globally. For context, there are nearly 33,000 Starbucks locations.

There are a wide range of outcomes

The math isn't over. Applying the pre-pandemic operating margins to the company-owned stores -- and giving it credit for a 3.5% annual boost in same-Shack sales and licensing fees thanks to price increases, success on mobile, and drive-through -- a path exists to roughly $545 million in operating income for the company 10 years out. For comparison, McDonalds trades at 19 times its operating income. For Chipotle, it's 66 times.

Applying those companies as boundaries would give Shake Shack a market capitalization between roughly $10 billion and $36 billion a decade from now. It's only a $3.6 billion company right now.

Admittedly, that's a best-case scenario. The company could stumble in trying to grow sales, find it's saturated in large cities, and ultimately get stuck as a novelty concept that's profitable only in areas with extreme population density. I'll call that the Hard Rock Cafe scenario.

I don't think that will happen. An all-American concept with wholesome ingredients and a creative and specialized menu is going to resonate with more and more consumers over time. Eating natural is a trend that isn't going away.

The company's commitment to crafting a desirable experience at an affordable price -- another macro trend -- will prove to be worth a premium to discriminating eaters. Although it would take everything to go right for Shake Shack to grow 1,000% over the next decade, I wouldn't be surprised if it happened. That's why the company is high on my watchlist as we exit the pandemic.