These businesses are firing on all cylinders.

There is no shortage of stocks making big gains. That's been especially true for healthcare recently. The Health Care Select Sector SPDR Fund has nearly doubled the broader market over the past three months.

We asked three Fool.com contributors which stocks in the sector they believe are the best buys this month. They chose Danaher (DHR -0.11%), Veeva Systems (VEEV -8.63%), and Editas Medicine (EDIT 1.89%). Here's why. 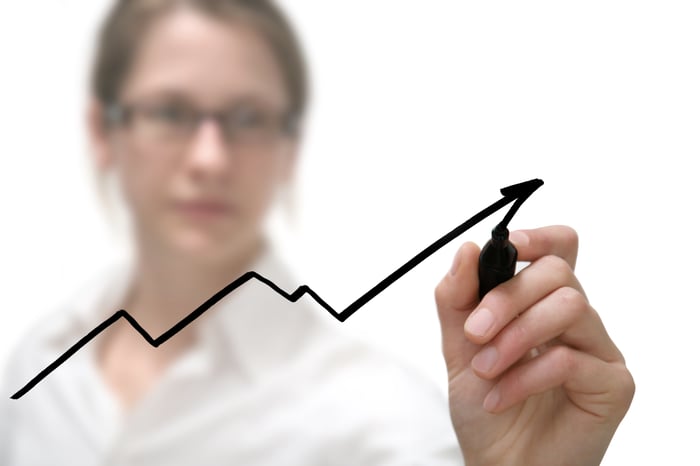 Jason Hawthorne (Danaher): Danaher has been widely recognized for its operational excellence and decentralized model. In fact, its Danaher Business System was profiled in the Harvard Business Review in 2015. True to form, it has undergone a transformation in the past few years by spinning off industrial units and doubling down on faster-growing science-based businesses. As it stands, there are more than 20 operating companies under the corporate umbrella in life sciences, diagnostics, and environmental and applied solutions. It's proving to be a winning formula.

The stock is up nearly 50% so far this year and management is projecting adjusted revenue growth of 20% for the full year.  For the first six months of 2021, revenue climbed 46% and operating income jumped 160%. In a testament to its ability to continuously improve, operating margin has expanded every year since 2016, climbing from 16% to 25% in the past 12 months.

The company has managed to morph just as the world is leaning more on scientific research. And its three business segments are growing faster than the global economy. Life sciences is expected to grow 8% per year this decade, while diagnostics and environmental solutions are projected to post 9% and 5% growth, respectively. Estimates vary. What isn't in doubt is that investors expect robust growth for such a large company.

Wall Street has reason to be confident. Danaher has made a series of acquisitions over the past decade -- Beckman Coulter, Pall, Cepheid, and GE BioPharma (now Cytiva) -- totaling $45 billion. The stock has gained 900% over that span adding $224 billion in market capitalization. It's a well-oiled machine that is poised to keep delivering in the years ahead.

Rachel Warren (Veeva Systems): In the increasingly digital age we live in, you'd be forgiven for losing track of the sheer volume of companies making waves in the world of cloud computing. And as a healthcare investor, you may or may not be tuned in to the latest disruptors in this explosive space. But if you're looking for a great stock to add to your portfolio this month that lends catalysts from both of these profitable industries, Veeva Systems should be a strong contender for your watch list.

Veeva Systems is one of many companies that has built its business around offering software as a service. However, it has carved a particularly unique niche for itself in that it provides these cloud-based solutions specifically to life sciences and pharmaceutical companies. With clients ranging from the likes of Biogen, Merck, and Bayer to Moderna, AstraZeneca, and Novartis, it's fair to say that Veeva Systems has done so with remarkable success. Bear in mind, the SaaS industry is growing at an exceptionally fast rate, from a global valuation of $158 billion in 2020 that's on track to surpass $307 billion as of the year 2026.

In Veeva Systems' most recent quarterly report, management said its total revenue jumped 29% year over year, as did its subscription revenue. In addition, the company increased its operating income by a notable 38% from the year-ago period, and its net income popped 16% year over year. Veeva Systems has also done a great job of boosting its liquidity and paying down debt even as it experiences tremendous growth. The company had $2.3 billion in cash, cash equivalents, and short-term investments on its balance sheet in the most recent quarterly report, compared to $662.8 million in total current liabilities (debt obligations due within the next 12 months).

Shares of Veeva Systems are up by more than 30% over the trailing six months. And if you look at the stock's gains over the trailing five-year period, it's shot up close to 690%. Meanwhile, the S&P 500 has marked respective gains of about 19% and 113% during these same two periods.

To cap it all off, Wall Street thinks the stock has a high upside potential of more than 25% over the next year alone. Now looks like a great time to tap into this company's exceptional growth potential that could yield many years' worth of generous portfolio returns.

Steve Ditto (Editas Medicine): In 2020, American biochemist Jennifer Doudna was awarded the Nobel Prize in Chemistry for the discovery of CRISPR gene-editing technology. CRISPR has the potential to treat and even cure diseases caused by genetic variants. Based on this tremendous advancement, industry observers like Cathie Wood of ARK Investment Management believe we are entering a genomic revolution where gene-editing has the potential to generate hundreds of billions of dollars in new revenue and trillions in new market capitalizations.

Editas Medicine is one such gene-editing company. Editas was co-founded by Doudna and is focused on using CRISPR technology to treat eye and blood diseases. Editas is in clinical trials to treat Leber congenital amaurosis 10 (LCA10) which causes severe visual impairment. Editas also plans to begin clinical testing by year-end to treat sickle cell disease.

Buoyed by the latest announcement and progress with its clinical trials, Editas stock price is up over 60% in the last six months versus 18% for the S&P 500. That's not bad for a company with essentially no revenue. In the second quarter of 2021, Editas had a net loss of $55 million with cash on the balance sheet of $698 million. Editas management expects its cash will fund operating expenses and capital expenditures well into 2023.

So investors may be asking, "Is this a good time to buy Editas?" The answer is likely "yes," since Editas has at least three viable paths to a higher stock price.

The first path is the tried-and-true biotech game plan to show promising clinical trial results, watch the stock jump, and then immediately issue more stock to fund the next round of growth. Competitor Intellia recently took this route.

The second path is to partner with a much larger pharmaceutical company that can fund the company based on meeting clinical milestones. Competitor CRISPR Therapeutics took this route with Vertex Pharmaceuticals.

The third path is to be acquired by a larger company looking to add early stage opportunities to its pipeline. Based on comments in its last quarterly earnings call, Moderna is on the hunt for gene-editing companies and Editas could be an acquisition candidate.

The gene-editing market is projected to reach $15 billion by 2028. Editas has a good shot at getting its fair share of the market and being a long-term winner. Editas stock has been red-hot over the last six months and the range of potential options on the table all present good outcomes for Editas investors. Buying Editas could make your portfolio healthier and let you participate in the coming genomics revolution.