While the largest server manufacturers focus on systems built around industry-standard x86 chips, International Business Machines (NYSE:IBM) goes a different way. The century-old tech giant sold off its x86-based server business long ago and today, it focuses on hulking mainframes and its high-end Power servers. IBM is still the fifth-largest server manufacturer in the world in terms of revenue, capturing just over 5% of the market in the first quarter of this year.

IBM's Power systems are not for everyone. Built around the company's own Power processors, these systems are meant for enterprise workloads that need extreme efficiency, reliability, security, and scalability. IBM's latest Power10 processor, built on a 7nm manufacturing process, includes advanced security features and big jumps in performance, especially when it comes to artificial-intelligence workloads. 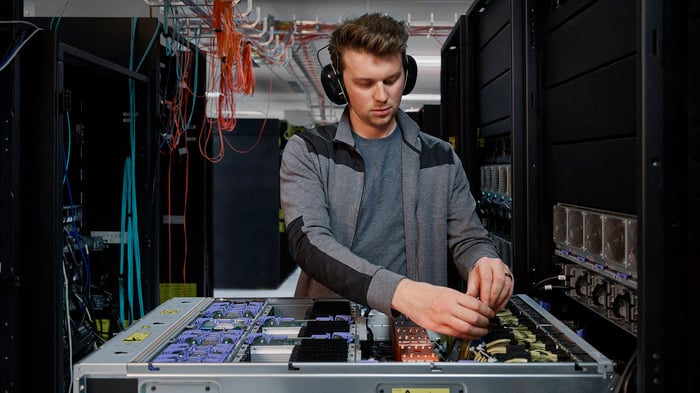 Aimed at the hybrid cloud

IBM announced on Wednesday that the first Power server based on the Power10 processor, the Power E1080, would ship sometime this month. The new system is aligned with IBM's hybrid cloud-focused strategy.

Just like the IBM of the past succeeded by being an integrated provider of hardware, software, and services, the IBM of today is aiming to succeed by offering an all-encompassing hybrid cloud platform. That includes software, as well as the underlying hardware.

Red Hat's software can run just about anywhere, and that fact hasn't changed now that the company's owned by IBM. Clients want the best solution, and that solution doesn't always involve IBM hardware.

As the company said last year as it announced the spin-off of its managed infrastructure services business: "IBM's open hybrid cloud platform architecture, based on Red Hat OpenShift, works with the entire range of clients' existing IT infrastructures, regardless of vendor."

IBM's E1080 represents the company's attempt to convince clients that its own hardware is the best option for those deploying Red Hat software. The company is introducing by-the-minute metering of Red Hat software, and users can scale their CPU capacity much like a public cloud with IBM's Private Cloud with Dynamic Capacity solution. These features add flexibility for clients.

In terms of performance, the E1080 excels at running Red Hat workloads. IBM claims that the E1080 can provide quadruple the OpenShift containerized throughput per core compared to an x86-based server. This additional throughput allows a single Power system to handle far more workloads than an off-the-shelf server.

One example of how powerful this new system is: IBM pointed to a client that found it could move a large database currently running on 126 x86-based servers to a pair of E1080 systems, reducing server energy use around 80% and per-core software license costs by 70%.

Hardware isn't a huge contributor to IBM's revenue anymore, although hardware sales drive sales of software and services. IBM sold $1.4 billion worth of hardware in the second quarter, spread across mainframes, Power servers, and storage products, representing just 7.5% of the company's total revenue.

Services are a big part of IBM's business right now, but sales will skew more toward software once the company's spin-off of its managed infrastructure-services business is complete. The company expects most of its revenue to come from high-value cloud software and solutions once the transaction is done.

IBM's Power servers allow the company to offer a full-stack hybrid cloud solution. Not every user of IBM's hybrid cloud platform will opt for IBM hardware, but there's an opportunity to convince existing Red Hat users to make the switch. One argument for the Red Hat acquisition was the cross-selling opportunities, which the company estimated in the billions of dollars annually at the time.

IBM sees hybrid cloud computing as its future. The new E1080 aligns the Power server business with that view.