Please ensure Javascript is enabled for purposes of website accessibility
Log In Help Join The Motley Fool
Free Article Join Over 1 Million Premium Members And Get More In-Depth Stock Guidance and Research
By Parkev Tatevosian, CFA – Sep 10, 2021 at 11:00AM

This fast-growing company increased revenue by over 100% in its most recent quarter.

Investing in younger companies on the rise can be a risky proposition. Many growth stocks are in the early stages of developing their businesses, and there is no guarantee they will survive the challenges they may encounter. Growth companies usually grapple with larger businesses that have deeper resources, more experience, and longer relationships with customers.

These obstacles are sizable, so what might make an investor willing to brave the task? Rewards. Growth stocks offer greater potential than established players. Businesses like PepsiCo, Home Depot, and Target are fortunate to grow revenue by 10% a year. Yet frequently enough, you can find growth stocks that can increase revenue by over 100%.

Many of the aforementioned qualities are present in my top growth stock right now. Pinterest (PINS -0.60%) is an image-based social media app, now battling established players with deep pockets. 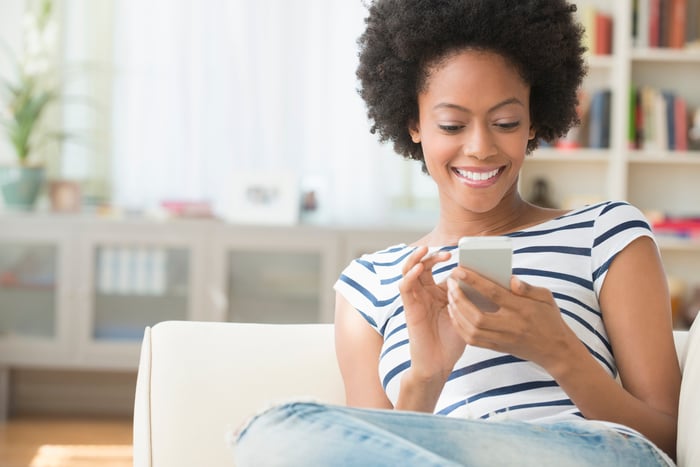 Pinterest is free for users to join. The company makes money by serving up advertisements to people who use its app or view its content in a web browser. In the business of selling digital advertising, two of Pinterest's many competitors are Alphabet and Facebook. These two are giants that garner attention from consumers and businesses alike.

Pinterest differentiates itself to marketers in at least one major way: Consumers go to the company's app for ideas and inspiration. In contrast, advertisers' primary reason for spending with Alphabet or Facebook is to get customers to click through to their site and make a purchase. In other words, marketers interested in generating interest for their product or service before a consumer has decided what to buy may be better served by spending on Pinterest.

Folks are finding the company's app inspiring and useful. Pinterest boasts 454 million monthly active users, up from 416 million the prior year, but down from 478 million in the previous quarter. The quarterly drop has taken center stage in investors' minds and resulted in a sell-off in Pinterest's stock. Still, management reminded shareholders there's no reason to panic, saying, "Looking beyond the COVID-19-driven volatility, our view on the long-term opportunity to grow our user base, both in the U.S. and globally, is unchanged from what it was before the pandemic."

Moreover, the same cause responsible for declining user engagement at Pinterest is also responsible for revitalizing activity in the economy. As more people get vaccinated, they are doing things they had put on pause out of caution: spending more time with friends and family at restaurants, ballparks, and other entertainment venues -- and less time with their electronic devices.

The flip side is that as more businesses reopen, they now have good reason to spend money on advertising. There was no rationale for Walt Disney to raise awareness of theme park deals when those parks were closed. Similarly, there was no motive to advertise upcoming movie openings when release dates were temporarily paused.

The resurgence of advertising has increased the average revenue per user for Pinterest by 89% from the same quarter last year. Combined, the effects of adding users and increasing revenue per user boosted revenue by over 100% to $480 million in Pinterest's fiscal second quarter ended June 30.

Panic over the company's loss in monthly active users has created a more favorable valuation. Not only did Pinterest lose users, but management failed to provide forward guidance on the metric. A surefire way to cause volatility in a stock is to add uncertainty to the business.

The sell-off has the stock trading at a forward price-to-sales ratio of 13.9, down from over 25 earlier in the year. The company's long-run prospects have not diminished. Rather, the price drop is due to increasing uncertainty in the short term, which is an opportunity for long-term investors.

For those reasons, investors looking for a growth stock with the potential to deliver exceptional returns over the long run can consider Pinterest stock.