Please ensure Javascript is enabled for purposes of website accessibility
Log In Help Join The Motley Fool
Free Article
Join Nearly 1 Million Premium Members And Get More In-Depth Stock Guidance and Research
By Will Ebiefung – Sep 10, 2021 at 10:52AM

Action camera manufacturer GoPro is staging an impressive comeback. But is it too little, too late?

With share prices down by 89% from their all-time high of $94 in 2014, GoPro (GPRO 2.21%) stock has been a nightmare for long-term investors. The company has a weak economic moat because its cameras aren't well differentiated from smartphones and an army of copycat competitors. That said, GoPro is reworking its business model, and the pivot is already boosting profitability.

Is it time to bet on the stock's resurgence, or should investors wait for more quarters of data? 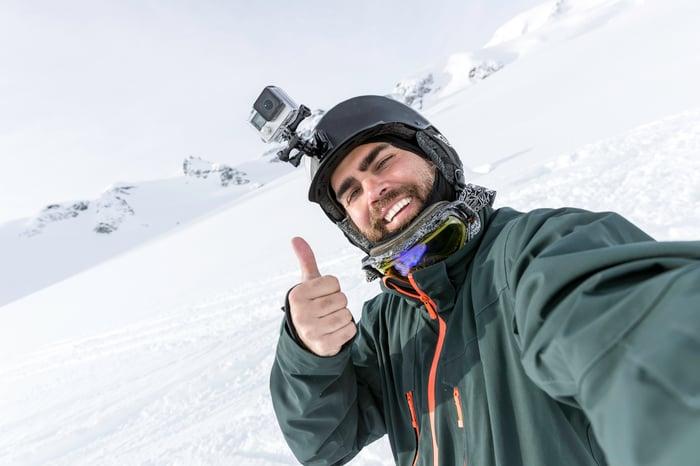 GoPro's second-quarter earnings were a slam dunk success. Revenue soared 86% year over year to $250 million, with gross margin jumping 950 basis points to 39.8%. The company also kept its operating expenses in check, which helped it earn a GAAP net income of $17 million -- up from a loss of $51 million in the prior-year period.

GoPro is also making a big push into software. Its $49.99 subscription service includes unlimited cloud storage, product discounts, live streaming, and no-questions-asked camera replacement. The package could appeal to its target market of content creators and daredevil athletes and help differentiate its brand from competitors.

The company's subscriber count grew 211% year over year to 1.16 million in the second quarter, representing $11.6 million in revenue (4.6% of total revenue). While that is still a tiny part of GoPro's operations, the segment is growing fast and boasts a gross margin of 70% to 80%, according to management. A further margin boost could come from online sales, which will help GoPro skip third-party retailers and sell its camera directly to consumers.

GoPro has a compelling valuation

With a market cap of just $1.53 billion, GoPro trades for just 1.4 times trailing revenue, which is low for a company with the potential for significant top-line expansion. More importantly -- it may be on the cusp of consistent profits as subscriptions and e-commerce juice margins. The low valuation could be a sign that investors are still skeptical about GoPro's ability to maintain its positive trajectory.

Zooming out to the previous five years puts GoPro's poor track record in perspective. Revenue peaked at $1.6 billion in 2015, and it is still down by around 33% from that figure. It might be premature to assume the company will quickly bounce back after struggling for so long. And its new growth drivers still make up a tiny fraction of revenue.

Is it time to buy the stock?

GoPro seems to be moving in the right direction, with sales and profits growing at a massive clip in the second quarter. Its e-commerce and subscription strategy can also generate long-term margin improvements. That said, one good quarter doesn't undo years of underperformance -- especially against super easy comps from the pandemic year of 2020.

Camera hardware also still makes up the vast majority of sales (95%), which means the company's weak economic moat is still a problem. So while investors should be cautiously optimistic about GoPro, they might also want to wait for more quarters of information before buying the stock.