Please ensure Javascript is enabled for purposes of website accessibility
Log In Help Join The Motley Fool
Free Article Join Over 1 Million Premium Members And Get More In-Depth Stock Guidance and Research
By Courtney Carlsen – Sep 11, 2021 at 9:01AM

Owl Rock Capital's dividend yield of more than 8% looks good, but is it worth the risk?

Dividend stocks are good investments for retirees and others seeking predictable income from their portfolio -- especially when they also offer long-term growth potential. Many large, established companies pay out regular dividends quarterly. Companies like Procter & Gamble, Coca-Cola, and Realty Income yield around 2% to 4% on an annualized basis.

And some stocks pay out more for investors willing to take on extra risk. Owl Rock Capital (ORCC -2.81%) is a middle-market lender with a dividend yield of 8.5% at Friday's closing price. The lender has only been publicly traded for a few years, and its high yield makes it hard to ignore. Does Owl Rock Capital's high yield make it worth the risk?

A lender to a neglected market

Owl Rock Capital makes loans to middle-market companies in the United States, and it is organized as a business development corporation (BDC).A BDC is simply a fund that makes loans to or buys equity in private businesses and can that banks may consider to be too risky. Like real estate investment trusts (REITs), BDCs are subject to tax rules that require them to pay out 90% of their income in the form of dividends. While BDCs can offer a high yield, they are also riskier investments due to the nature of their investments and their use of leverage. 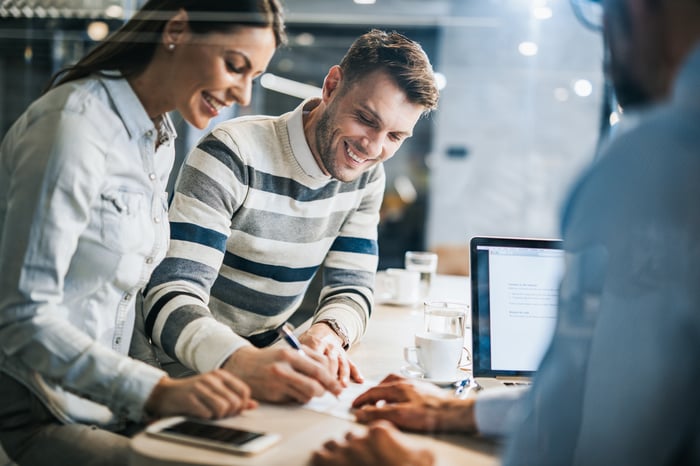 Owl Rock Capital seeks opportunities in the middle-market lending space. The company sees this space as underserved, as big institutional investors are bogged down by liquidity requirements, leading them to invest in bonds from larger corporations. Owl Rock Capital looks to make this an advantage of its stable capital base and ability to invest in illiquid assets.

BDCs are risky because of the nature of their investments. Because many of their investments are in illiquid securities, they could be subject to quick losses in the event of a default or series of defaults on loans. Additionally, BDCs tend to use leverage, which can further magnify potential losses.

Owl Rock Capital employs a leverage ratio of 1.0 times debt to equity, within its range of 0.9 and 1.25 leverage target.

A strong backdrop for lending to mid-market companies

Originations in the second quarter were strong for Owl Rock Capital. New investment commitments during the quarter were $1.6 billion, up from $401 million in the same quarter last year, and nearly double the $864 million it posted in the first quarter this year.

Investment performance was robust, aided by strong merger and acquisition activity that saw private equity firms choosing direct loans for many of their larger deals. Direct lending seeks to pool capital to make loans, rather than raising capital from investors, playing into Owl Rock Capital's strengths. On the year, the company has evaluated 20 opportunities over $1 billion in size, investing in eight of them.

Through June 30, it has investments in 129 companies with a fair value of $11.9 billion, and its average yield on its portfolio was 8.1%. Its investments are made up mostly of first lien senior secured debt investments, 76% of its total debt. Senior secured debt means Owl Rock Capital would have first claims on the company's assets in the event it went under, and means the debt tends to be less risky than unsecured debt.

Owl Rock Capital has exposure to a wide array of industries, with no more than 11% invested in a single one. Industries it serves include internet services, insurance, food and beverage, distribution, and healthcare providers.

A risky investment, but its high yield may be worth it

Owl Rock Capital doesn't have a long history, given that it's only been publicly traded for a little over two years now, so we can't say much about its dividend payout history. However, management expects the third quarter to be another solid period of originations and has already declared another dividend of $0.31.

One thing investors should note is that Owl Rock has failed to cover its quarterly distributions when you break it down by net interest income per share. In the second quarter, it covered 97% of its dividend payment, based on a dividend per share of $0.31 and net interest income per share of $0.30 for the quarter. Management has stated its goal is to fully cover the distribution in the second half of 2021.

Owl Rock Capital is a high-yield dividend stock that can be thought of in a similar manner to a REIT. Its high yield is attractive, but it does come with added risk due to potential defaults or risks if the broader economy struggles. However, given the strength of the economic recovery and lending markets, Owl Rock Capital looks like a solid high-yield dividend stock that is worth the risks.

This Ultra-High-Yield Dividend Stock is Up 21% in the Past Month -- Is It a Buy?