Please ensure Javascript is enabled for purposes of website accessibility
Log In Help Join The Motley Fool
Free Article Join Over 1 Million Premium Members And Get More In-Depth Stock Guidance and Research
By Bram Berkowitz, Keith Noonan, and Nicholas Rossolillo – Sep 12, 2021 at 7:30AM

We believe all three of these suggestions will deliver shareholders big gains.

There's a lot of worry among investors that the stock market could be in for a correction as we wade deeper into September, after what has been a frothy year for the market. That could lead lots of investors to take some of their gains and pile into cash. But if you've got some cash that you are looking to invest now, fear not, as there are always corners of the market where winners are just waiting to be found.

With that said, we put together a panel of Motley Fool contributors who identified three stocks they see huge opportunity in: Stitch Fix (SFIX -7.21%), Gannett (GCI 1.76%), and Airbnb (ABNB -2.43%). Read on to see why they think these three companies could win big.

Nicholas Rossolillo (Stitch Fix): Stitch Fix has been mostly down in 2021, but it certainly isn't out. Caught up in the growth stock sell-off this past spring, it then downgraded expectations for full-year sales and underwent a CEO transition from founder Katrina Lake to now-CEO Elizabeth Spalding. Stitch Fix stock is down 34% so far in 2021 on the various shreds of potentially worrisome news. Compared to this same time a year ago, though, shares are up a more-than-respectable 47%.

As of this writing, Stitch Fix is valued at a mere 2.1 times trailing-12-month sales -- a screaming long-term value if this tech-enhanced apparel and accessories company can maintain its momentum. Through the first nine months of its 2021 fiscal year (the nine months ended May 1, 2021), sales grew 21% from the same period last year to $1.53 billion. The company expects to notch at least a 22% rate of growth in its final quarter of fiscal 2021, as it laps the depressed period of sales from last summer (when clothing retail was down in the dumps during the first few months of the pandemic). 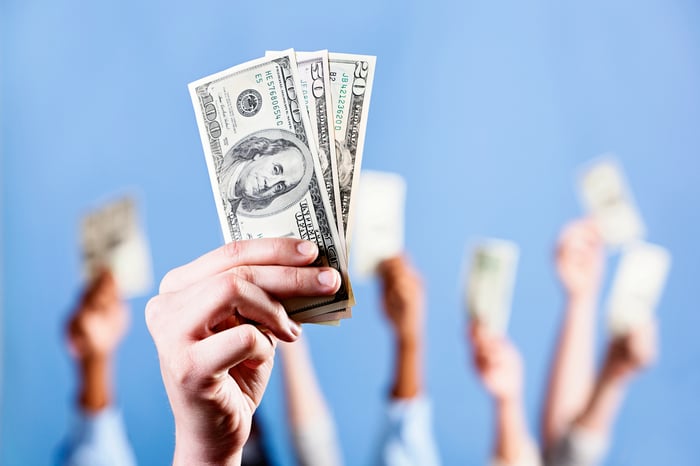 Granted, many investors might be inclined to pass on Stitch Fix because it isn't profitable yet. Net loss was just over $30 million during the first nine months of the year. However, this is largely by design as Stitch Fix is styling itself as a growth stock and funneling excess cash into marketing expenses and research and development. Speaking of research, Stitch Fix's AI-driven algorithms have reportedly been drawing fire from some of the company's stylists, with some saying they're competing with the software as Stitch Fix gives customers more options to pick and choose from tech-curated ensembles.

This is, of course, yet another situation worth keeping an eye on; disgruntled employees could affect the relationship Stitch Fix has with paying customers if the AI company can't deliver the right stuff. But Stitch Fix is, nonetheless, working hard to improve its service and is helping pioneer a new way to shop for new threads on the internet. After the drubbing it's endured this year, shares look too cheap to ignore ahead of the Q4 fiscal 2021 earnings update on Sept. 21.

There's life in this newspaper business

Bram Berkowitz (Gannett): If I told you to buy a newspaper company hand over fist, you'd be right to give me a healthy dose of skepticism, but I'm going to do it anyway because I do see a big opportunity here flying somewhat under the radar. In 2019, Gannett completed its merger with New Media Investment Group to become the largest newspaper publisher in the country. They own some of the largest newspaper brands, including USA Today, The Indianapolis Star, The Des Moines Register, and many more.

Initially, the deal got panned as the print business had been struggling for many years and investors were less than enthused to see Gannett take on a large $1.8 billion term loan to complete the deal. Gannett's stock dropped below $1 at one point in 2020. But the company has begun to get its act together and now trades around $6.30 per share. Since last year, the company has been able to refinance its debt and pay some down, and now sits with a little less than $1.5 billion of outstanding debt.

The company's projected earnings before interest, taxes, depreciation, and amortization (EBITDA) in 2021 is nearly $477 million, while it has a current enterprise value (EV) of nearly $2.1 billion, giving it an EV/EBITDA value of about 4.34. Projected revenue in 2021 is nearly $3.3 billion and the company's current market cap is roughly $900 million, so if things go well this would be a great time to buy.

Book a trip to growth with this industry leader

Keith Noonan (Airbnb): Despite recent gains, Airbnb stock still trades down roughly 25.5% from its lifetime high. Investors shouldn't let the relatively muted performance across the vacation rental specialist's short history as a publicly traded company dissuade them. Airbnb stock looks pretty enticing when viewed in the context of the strong performance the company has been delivering since making its market debut.

The travel industry innovator has still been dealing with challenges created by the coronavirus pandemic, but it's also become a leaner, more effective business in response to these headwinds; and it's managed to put up encouraging results despite the huge challenges at hand. There's also a very powerful network effect at play here.

Over 4 million hosts across the globe already use the company's platform, and more are joining every day. As more hosts join the platform, guests will have more accommodations to choose from. That new level of variety should help attract a greater number of users to the platform, which will in turn encourage more people to join as hosts.

Airbnb's business model is already a proven success, and it looks highly scalable from here on out. The company is also branching into the experience services category -- offering travelers the opportunity to book reservations to local events. With the ability to pair room accommodations and event tickets, Airbnb has a burgeoning new growth opportunity that should help boost average spending per booking and overall margins.

With the company sporting a market capitalization of roughly $104 billion and trading at approximately 18 times this year's expected sales, it's clear that healthy growth is already baked into Airbnb's valuation. However, the company has an incredible runway for expansion ahead and looks primed to deliver strong earnings growth. I think patient investors stand to see fantastic performance from the stock.