Please ensure Javascript is enabled for purposes of website accessibility
Free Article Join Over 1 Million Premium Members And Get More In-Depth Stock Guidance and Research
By Royston Yang - Sep 14, 2021 at 7:19AM

This technology company has grown steadily over the years and holds the promise for more amazing discoveries in the future.

Investors are probably familiar with FAANG stocks by now, seeing how these five companies -- Facebook, Amazon, Apple, Netflix, and Alphabet ( GOOG -0.87% ) ( GOOGL -0.68% ) -- have powered the Nasdaq index to all-time highs in the last decade. The prominence of these five technology companies cannot be overstated, and even during the pandemic, the FAANG fivesome has been responsible for pushing the technology index to a new all-time high.

But if there's one stock among the five that you should be thinking of buying today, it's Alphabet. Originally known as Google, or the "G" in the FAANG acronym, the company changed its name in 2015 to signify that it is far from a conventional business. Although Google is still a core part of Alphabet, the company is made up of a collection of disparate businesses that explore different technologies and industries.

The above, as well as the fact that Alphabet is churning out superb numbers, are good reasons why you should not hesitate to scoop up shares of this internet giant. 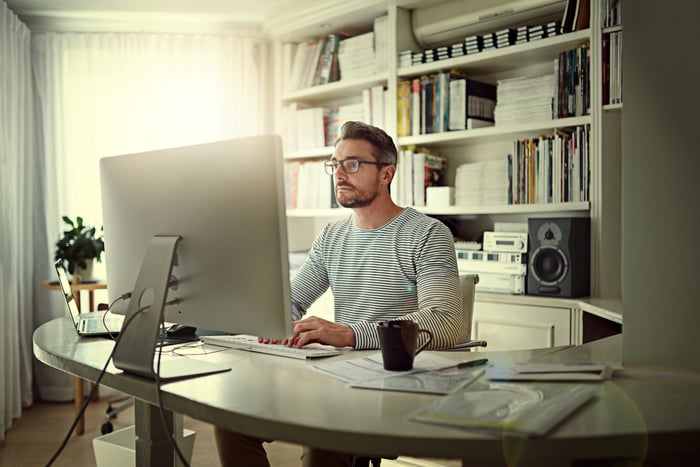 Alphabet's financial performance is impressive, which explains why the stock has nearly doubled in the past year alone. Revenue started at $90.3 billion in 2016 and more than doubled to $182.5 billion by 2020, while net income jumped from $19.5 billion to $40.3 billion over the same period. Moreover, capital spending has remained fairly constant even as operating cash flow increased, leading to higher levels of free cash flow for the business over the last several years.

The company has shown that it can still grow rapidly, with its fiscal 2021 second-quarter revenue surging by 62% year over year. Increased technology adoption and digitalization were important factors that contributed to the rise, but Alphabet was already on a steady growth trajectory even before the pandemic broke out. Net income for the quarter more than doubled year over year to $18.5 billion, and the company's half-year net income of $36.5 billion has already exceeded the net income for the whole of 2019.

A culture of continuous improvement

The great thing about Alphabet is not only its financial numbers, but how the company strives to better the lives of all of us in myriad ways. The pandemic has highlighted just how innovative the company has been, as teams at Google launched more than 200 new products and features. A COVID-19 layer was also added to Google Maps to show information on cases to help people to plan their travel routes, and Google Meet, the company's videoconferencing software, was made free for anyone with a Gmail account.

CEO Sundar Pichai offered a glimpse into new products and systems on the company's latest earnings conference call. A new artificial intelligence system called Lambda, with natural conversation capabilities, can help to make communication and computing more accessible to everyone. The upcoming version 12 of Android seeks to improve speed and power efficiency and can also personalize devices. while YouTube Shorts, a short-form video format similar to the popular TikTok, has been rolled out in more than 100 countries worldwide and has garnered more than 15 billion daily views.

Alphabet is also investing $10 billion over the next five years to strengthen cybersecurity, as this is now a critical area of focus for many companies and governments. And let's not forget that the technology behemoth also has an "Other Bets" division that makes ambitious investments in new technology such as self-driving cars and healthcare data analytics.

That's just a quick snapshot of Alphabet's biggest headlines in recent weeks. It would take a book to cover everything.

The allure of moonshots

At the heart of Alphabet's culture are "moonshots," which help the business to branch out into adjacent or new technologies and nurture them into mature, thriving businesses. Essentially, the company is not interested in making just incremental changes to its products and services but is focused on looking for revolutionary change that can bring technology to a new level.

As such, the company will not shy away from high-risk projects and encourages a culture of innovation that could see it discovering groundbreaking new technologies that could power the future. This, in essence, is what makes the future so exciting for an investor in Alphabet.

The great news is that the company still has a long growth runway in front of it. Digital advertisement spending, for which Google's share was close to 29% of the U.S. market last year, grew 12.2% year over year in 2020 and shows signs of additional expansion.

Alphabet continues to invest in new technologies and is also constantly improving its cloud services, search engine, and other features. With the pandemic as a tailwind for technology adoption, investors should feel confident that the company can continue to deliver. The stock is inexpensive, trading at just 26 times forward earnings, as it can probably chalk up consistent growth in revenue and net income for many more years.