Penn National Gaming took a position in a smaller sports betting company. The last time they did this shareholders that held saw very nice gains.

Penn National Gaming (PENN 0.17%) has taken a 7% position in Australian sports betting company, PointsBet Holdings (PBH 1.00%) (PBTH.F -5.76%), which has some investors wondering if PointsBet could be the next 10X.

It's no shocker that Penn is expanding its reach in the sports betting market. The company has been very acquisitive in the space, buying Score Media and Gaming Inc. (SCR) and taking a position in Barstool Sports. CEO Jay Snowden is serious about this market.

But this latest expansion might offer a clue to investors that there's serious upside in PointsBet, if not Penn, too. 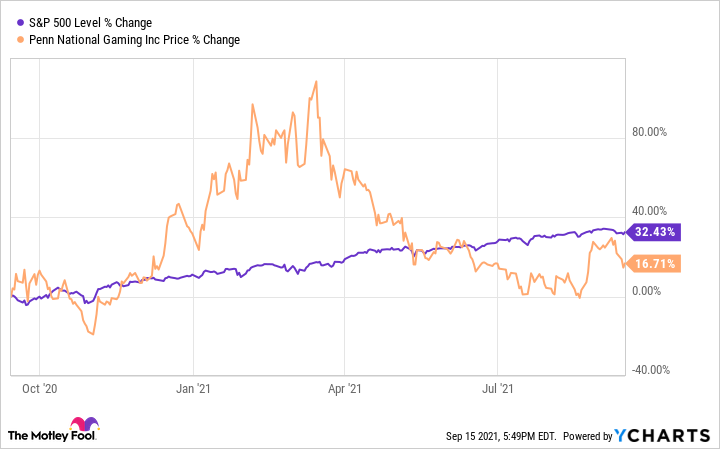 Penn National Gaming announced its deal to acquire Score Media almost exactly two years after announcing it had added a 9% stake in the company via private placement. Clearly the company liked what it learned over those two years to take the company out in a cash-plus-stock deal valuing the shares at the time of announcement at $34.

For investors today, Penn's history with Score could be instructive. Score's stock traded around $4 at the time Penn's initial investment was announced, implying a nice 750% gain for anybody who bought in at that $4 dollar level – not bad for a two-year investment. So, is PointsBet the next Score Media and Gaming?

That's the right question to ask. PointsBet does trade over the counter, so most U.S. investors can take a speculative position and hope that executive decision making at Penn falls in their favor. But that's really all there is to this – speculation. Penn, on the other hand, may be a stock to own longer term for those bullish on sports betting.

Why Casino Stocks Jumped This Week
371%