The nearly 10% drop in Sumo Logic's (NASDAQ:SUMO) stock price that followed on the cloud data intelligence's specialist's fiscal second-quarter results placed the stock more than 50% below its February all-time high. Yet, the company is poised to sustain double-digit revenue growth over the long term as it addresses a vast and expanding big data market with its modern cloud-based solutions. So, should investors take this opportunity to invest in this cloud stock?

Founded in 2010, Sumo Logic enhanced its initial infrastructure and app monitoring cloud-native platform with additional solutions that leverage artificial intelligence and machine learning to analyze big data and help enterprises get insights into their infrastructures and businesses for better decision making.

And given the shift of enterprises to cloud computing, the market opportunity seems large and growing -- management calculated it at $49.1 billion last year. 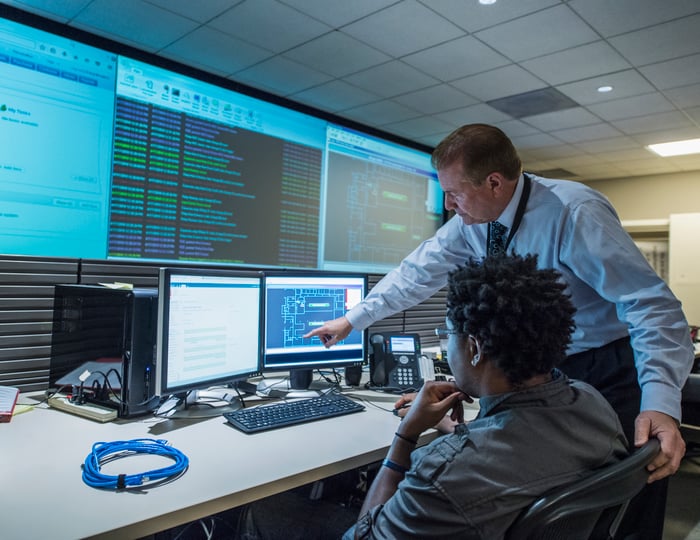 So with revenue of $58.8 million during the fiscal second quarter (which ended on July 31), up 19% year over year, the company still has plenty of room to grow.

And it seems poised to capture that opportunity -- at least in the short term. Indeed, management anticipates strong double-digit revenue growth to continue with its improved full-year revenue forecast in the range of $236.8 million to $238.8 million in 2022, which corresponds to 17% growth at the midpoint.

Yet, following the 9.49% drop in the stock price after those better-than-expected results, the market values Sumo Logic at a forward enterprise value-to-sales ratio of 7, based on the midpoint of management's full-year guidance. That brings the company's valuation at the low end of the range of its historical forward enterprise value-to-sales ratio. 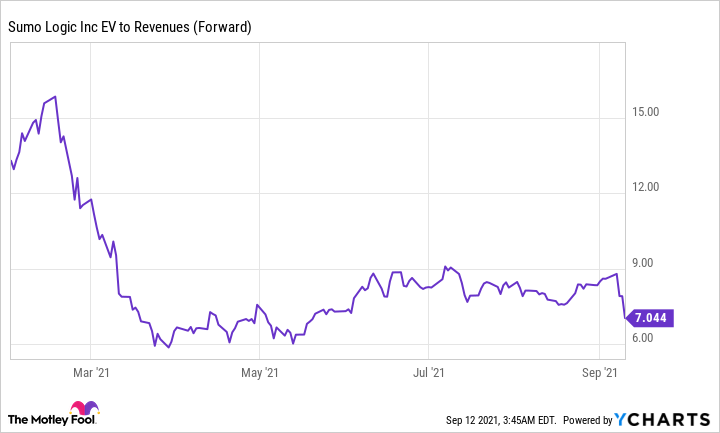 Thus, Sumo Logic's valuation seems to have become attractive. In addition, if you compare with competitors, the valuation discount looks even more impressive. For example, data specialists Elastic (NYSE:ESTC), Splunk (NASDAQ:SPLK), and Datadog (NASDAQ:DDOG) are trading at much higher enterprise value-to-sales ratios of 10, 17, and 44, respectively.

Of course, the higher revenue growth rates these competitors have been enjoying despite their larger scale contribute, at least partially, to such higher valuation ratios.

Sumo Logic's lower revenue growth relative to those peers suggests the company is losing market share to them, which leads to increasing its scale disadvantage.

Indeed, because of its much-reduced scale, it can't outspend its larger competitors on research and development efforts, which prevents Sumo Logic from offering the broad portfolio some customers require to consolidate their monitoring, security, and data insight capabilities.

That creates a vicious circle where larger competitors are likely to increase their scale advantage with a more comprehensive portfolio, which allows them to budget higher research and development and sales and marketing expenses to fuel more growth and deepen their competitive advantage. 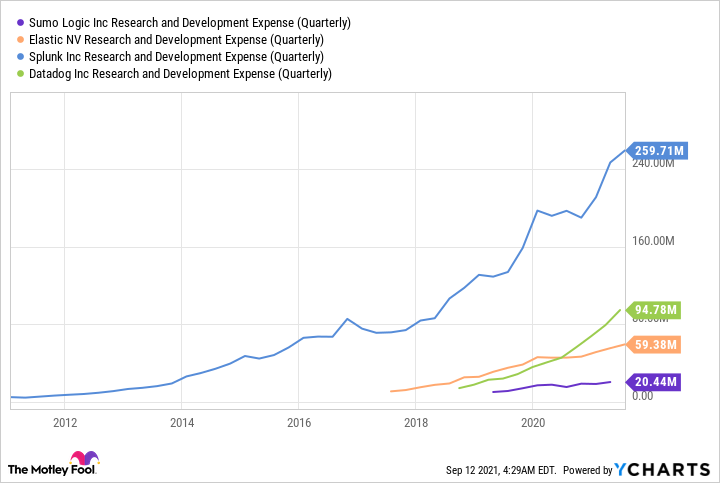 Granted, Sumo Logic is making some progress with new products that catch up with its competitors' existing offerings. For instance, it announced new cybersecurity features and application performance capabilities to enhance its platform and trigger cross-selling opportunities.

It's also gaining industry recognition. The research outfit Gartner recently included Sumo Logic in its magic quadrant for Security Information and Event Management (SIEM) as a visionary in terms of ability to execute and completeness of vision. Yet, you should keep in mind Gartner still gave six of Sumo's competitors even stronger positions as leaders in that magic quadrant.

In the end, despite the apparently attractive valuation, Sumo Logic's stock remains too risky for my taste. The company is poised to sustain long-term double-digit revenue growth with its modern cloud platform in a large and growing market. At the same time, Sumo is struggling to catch up against competitors that manage to grow faster despite their much larger scale.

In addition, Sumo Logic's valuation still corresponds to strong revenue growth expectations that may not materialize given the company's competitive disadvantage. Thus, investors should wait for Sumo Logic to eventually match the growth of its competitors before considering adding it to their list of cloud stocks to buy.