Last month, Kohl's (NYSE:KSS) reported incredible earnings results for the second quarter of fiscal 2021. Earnings per share surged 64% over Q2 2019, reaching a second-quarter record of $2.48. While sales increased just slightly over this period, Kohl's capitalized on strong demand and an industrywide inventory shortage to cut back on discounts, driving its profit margin dramatically higher.

Even more impressively, the company generated $1.25 billion of free cash flow last quarter. Strong cash flow, a solid balance sheet, and ample excess cash put Kohl's in position to return a huge amount of cash to shareholders through dividends and share buybacks over the next few years.

Balance sheet back to normal

Like many of its peers, Kohl's rushed to raise capital when the pandemic struck in early 2020. The company issued $600 million of new debt and drew down its credit facility during the first quarter of fiscal 2020, increasing its long-term debt by a total of $1.6 billion.

However, while Kohl's recorded a $541 million net loss in the first quarter of fiscal 2020, the retailer extended payment terms for suppliers to conserve cash. As a result, it burned just $109 million of cash during that period. Furthermore, Kohl's dramatically slashed its capital spending for the remainder of fiscal 2020, suspended all dividends and share buybacks, and reduced its inventory to better match demand. 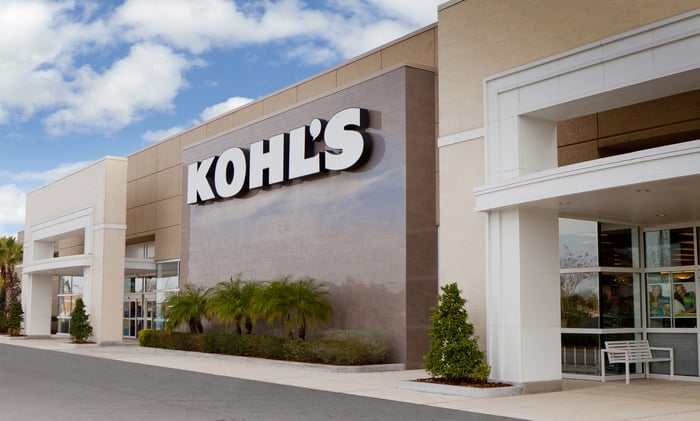 Between this spending discipline and a surprisingly fast demand recovery, Kohl's ultimately generated $1 billion of (positive) free cash flow last year. It also raised nearly $200 million by selling two distribution centers and leasing them back. Finally, the company generated another $1.5 billion of free cash flow in the first half of fiscal 2021.

These achievements have enabled Kohl's to repay virtually all of the debt it issued last year. It ended last quarter with $1.9 billion of long-term debt, essentially unchanged from two years ago. Meanwhile, its profitability has improved dramatically from 2019, putting its leverage ratio back in line with pre-pandemic levels. In short, Kohl's has fixed its balance sheet and can safely return most of its excess cash and free cash flow to shareholders.

Back in February, Kohl's reinstated its quarterly dividend payment at a greatly reduced level of $0.25 per share. Before the pandemic, it was paying slightly more than $0.70 per share each quarter. The company also said it will restart its buyback program, repurchasing $200 million to $300 million of stock during this fiscal year.

With profitability and cash flow surging, though, Kohl's ramped up its buybacks last quarter. It repurchased $301 million of stock in the first half of fiscal 2021, surpassing its full-year plans. Moreover, it still ended the quarter with more than $2.5 billion of cash. That caused it to up its full-year share buyback target to a new range of $500 million to $700 million.

Kohl's appears to have spent another $70 million to $80 million on buybacks in August. If it continued this pace for the rest of the fiscal year, it would surpass the high end of its updated share-buyback guidance. Moreover, Kohl's stock has pulled back in recent weeks despite the company's stellar earnings report. If anything, this will encourage management to accelerate the company's buybacks further. 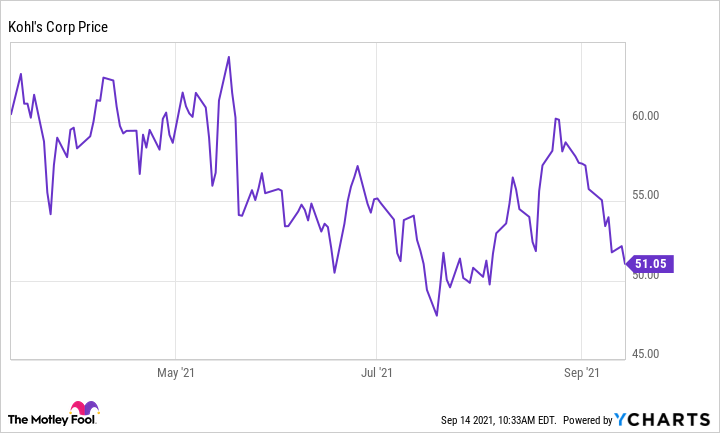 To some extent, temporary factors such as an inventory shortage and payment timing have bolstered the company's cash balance. Nevertheless, the retail giant has at least $1 billion of excess cash that should be returned to shareholders.

Furthermore, Kohl's is likely to generate at least $1 billion of annual free cash flow in the future. Notably, capital spending needs should be fairly modest for the foreseeable future. Kohl's isn't likely to open many new stores. It also opened its sixth e-commerce fulfillment center earlier this year, so it shouldn't need to make big investments in this area for the next few years. Technology and store renovations will continue to account for the bulk of its capital expenditures.

Between its existing excess cash and its likely free cash flow, Kohl's could quite plausibly return $3 billion of cash to shareholders between now and the end of 2023, mainly through buybacks. With the department store giant currently carrying a market cap of just $8 billion, this flood of cash will significantly enhance Kohl's shareholders' returns over the next few years.