Reliable, high-growth stocks can transform your retirement account, but finding that combination of attributes in a potential new stock unfortunately isn't easy.

Chances are, you already know about the FAANG stocks -- they have famous histories of being just this type of investment. But for investors who want to look further afield, here are three other fundamentally sound tech companies that have built up competitive advantages in high-growth industries. Any of these stocks could make valuable additions to your 401(k) or Roth IRA portfolios.

ServiceNow (NYSE:NOW) provides cloud-based tools to automate digital workflow for enterprise teams, which in turn improves employee productivity. This company checks all the important boxes for a long-term growth investment. Its revenue is expanding rapidly, it has a demonstrable competitive advantage in its space, and it produces plenty of free cash flow. 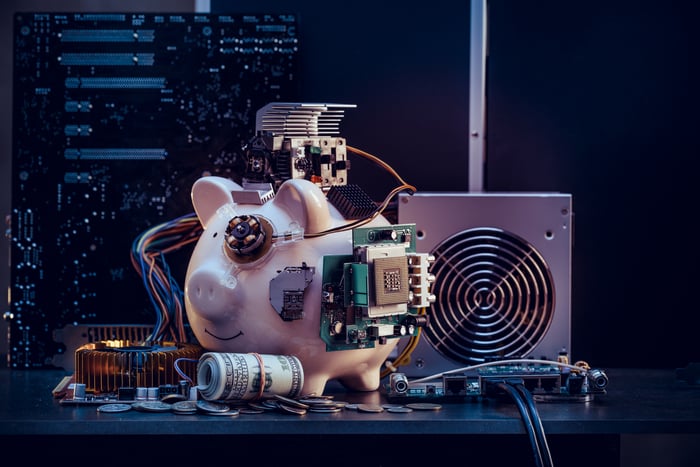 ServiceNow holds the largest single slice of the IT service management market with a 37% share, and it has more than 1,000 clients with annual contracts worth at least $1 million. Further, it boasts a 97% revenue renewal rate, which is clear evidence that its customers value its service and are unlikely to switch to competing solutions.

ServiceNow operates in a highly competitive industry, but it has shown the ability to retain its position as an integral part of operations for a large number of businesses. This helps create an economic moat for the company, which is a great feature for long-term stability.

Pair this with exceptional growth, and you have what could be a rock star stock for your retirement portfolio. ServiceNow has averaged 33% annual revenue growth in recent years, and it's forecast to expand by at least 25% annually for the next two years. Digital transformation is reshaping businesses in every industry, which will remain a growth catalyst for ServiceNow.

Square (NYSE:SQ) is a fast-growing fintech that's making waves with small businesses and consumers. The company originally created mobile payments hardware and software for small business owners that allowed them to facilitate card payments with their customers more easily. Square has since developed an array of tools and services to help its business clients. In 2013, it launched a consumer-facing mobile app, now called Cash App, that helps users with digital transfers, payments, banking, and investments. It now has more than 30 million active users.

Square occupies an important role in the ongoing fintech transformation. Payments, transfers, and investments are all becoming faster and cheaper. Consumers and business owners now expect more efficiency in financial activity, and Square is one of the emerging providers of those rapid services. With more than a decade of operating history leading to its current $115 billion market cap, Square can't be considered an upstart newcomer anymore. However, given the relatively small share of payments and transfers that are processed by the company, it has ample room for continued growth for years to come.

Square has averaged 62% annualized revenue growth, and analysts expect double-digit percentage annual expansion to continue over the medium term. Its expensive valuation might be off-putting for some investors, but a forward P/E ratio of 120 isn't as daunting if you're looking to buy and hold for 20 to 30 years. A long time horizon will give the company plenty of time to grow into its valuation, and periodic volatility should be assumed in any long-term stock investment.

Its biggest risk in the long term is competition. Square's rivals include fintech peers such as Paypal, traditional banking powerhouses, tech giants such as Alphabet and Apple, hundreds of disruptive start-ups, and also blockchain-enabled solutions, which are growing in utility.

Despite the competition, Square has executed phenomenally to date, and it has a strong suite of products. That makes it an exciting investment opportunity.

Veeva Systems (NYSE:VEEV) provides cloud software to pharmaceutical, biotechnology, diagnostics, and other life sciences organizations. It has more than 1,100 clients, including many of the world's largest drug companies. These customers use its products and services to support important functions including drug development, regulatory compliance, clinical data analysis, and customer relationship management (CRM). Veeva holds a 50% to 60% share of the life sciences CRM market.

That dominant position in the life sciences market is exactly what makes Veeva such a compelling investment for your retirement account. The company's niche strength shields it from more generalized competitors such as Salesforce.com. Meanwhile, its scale protects it from disruptors that are focused on its own market niche, in part because it's expensive to switch vendors. This gives Veeva a competitive moat and pricing power, as evidenced by its nearly 30% operating margin and 18% return on invested capital.

Even more encouraging, the life sciences market is expected to grow quickly. For example, the branded pharmaceutical industry is forecast to expand at an annualized rate of nearly 13% through 2028, while biotech is forecast to grow at a 16% annualized rate over the same time frame. Thanks to the hard work it's done to date, Veeva will be an indirect beneficiary of those trends.

As with Square, new investors will have to pay a premium to buy Veeva shares now, but its long-term growth opportunity is enough to justify that risk.