Robinhood Markets (NASDAQ:HOOD) has been one of the more divisive and volatile initial public offerings (IPOs) of 2021. Its robust growth in users and revenue dazzled the bulls, but concerns about its controversial payment-for-order-flow (PFOF) business model and regulatory threats attracted the bears.

Robinhood went public at $38 per share in late July. The stock initially dipped below its offering price but skyrocketed to $85 per share in early August as it briefly became a meme stock.

But that rally quickly fizzled out, and Robinhood's stock tumbled back to about $40 per share as the Securities and Exchange Commission (SEC) scrutinized several of its core business practices -- including its gifting of free shares of random stocks to new members, its sales of order flows to subsidize free trades, and the "gamification" of its online trading platform. 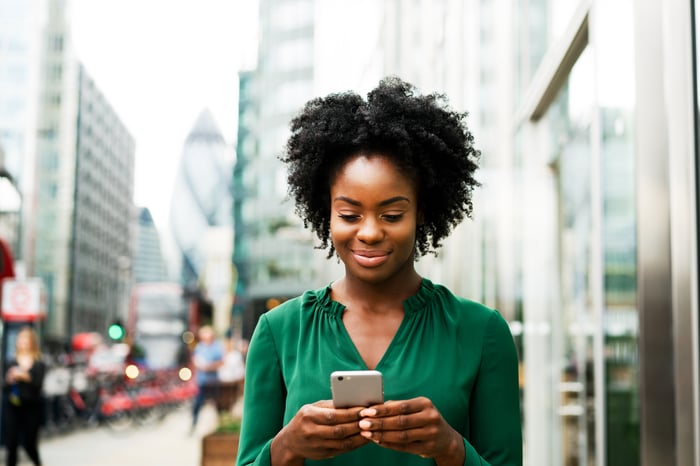 Yet many major investors remained bullish on Robinhood. The famed growth investor Cathie Wood accumulated more shares of Robinhood as it stumbled for three of her ARK exchange-traded funds. Robinhood's underwriters also partially exercised their over-allotment option to purchase an additional 4.4 million shares (out of a maximum 5.5 million) at the offering price in late August.

Robinhood could remain a battleground stock for the bulls and bears for at least a few more months. But let's look beyond that near-term noise and see where this stock could be headed over the next five years.

Robinhood disrupted traditional brokerages by offering free stock trades. It subsidizes its clients' orders by selling them to high-frequency trading firms, which profit from the bid-ask spread on each order.

Robinhood's free trades, along with its streamlined app and game-like achievements, made it a popular platform for younger first-time investors. At the time of its IPO, 70% of its assets under custody (AUC) came from investors between the ages of 18 to 40, with a median age of 31. Its launch of free cryptocurrency trading in early 2018 further amplified its appeal among younger investors.

Robinhood ended 2019 with 4.3 million monthly active users (MAUs), but that figure surged to 11.7 million in 2020 and 21.3 million in the first half of 2021. That growth trajectory puts it on track to overtake Fidelity, which serves 38 million investors, and Charles Schwab (NYSE:SCHW), which hosts 32.4 million active brokerage accounts.

Fidelity, Schwab, and other brokerages all rolled out commission-free trades to counter Robinhood, but that competition hasn't stifled its growth. Robinhood's revenue surged 245% to $959 million in 2020, then grew 193% year over year to $1.09 billion in the first half of 2021. Analysts expect its revenue to rise another 108% this year, and grow 37% next year.

Robinhood's most pressing concern is the SEC's scrutiny of its PFOF business model. The critics claim the PFOF model always prevents investors from getting the best price for a stock, since their orders are routed through market makers that profit from the bid-ask spread.

However, PFOF supporters argue that market makers like high-frequency trading (HFT) firms can buy those stocks at much more favorable prices with bulk automated orders instead of tiny individual trades. In their view, it's a win-win situation for the individual investor and the HFT firm.

I believe the SEC won't ban PFOF, for a simple reason. Most of the other major brokerages -- including Schwab, its subsidiary TD Ameritrade, and Morgan Stanley's (NYSE:MS) E*Trade -- also use PFOF revenue to subsidize their commission-free trades. These brokerages might prefer to go back to charging commissions for each individual trade, but the genie can't be put back in the bottle now that investors are accustomed to free stock trades.

Robinhood has also eliminated game-like features like digital confetti explosions to address criticisms of the app's "gamification" of investing, and it doesn't expect proposed changes to reimbursement charges for gifted stocks to significantly alter its program of gifting free shares to new investors.

Where will Robinhood be in five years?

Robinhood trades at 12 times next year's sales, a price-to-sales ratio that is low relative to its growth rates. Investors seem reluctant to buy Robinhood's stock right now due to the regulatory headwinds, but I believe it will overcome its growing pains and generate stable growth over the next five years.

If Robinhood clears analysts' expectations for 2021 and 2022, then grows its revenue at just 30% over the following three years, it could generate about $6 billion in revenue in 2025. If Robinhood's P/S ratio holds steady, its stock could more than double. If investors are willing to pay a higher premium for the stock as the regulatory headwinds wane, its stock could easily triple.

Robinhood's stock will remain volatile as it attracts more media attention than its legacy peers, but it could head much higher as its platform expands and it provides investors with a clearer view of its future.