There will be no need to check on how they're doing every day.

Do you want an investment that you can just buy and forget about, regardless of what's happening in the stock market every day? You don't have to settle for boring old dividend stocks to fit that purpose. There are plenty of good growth investments that are not only safe but also likely to continue increasing in value over the years as their financials get stronger. And some of them even pay dividends, too.

Three stocks to put on your list if you're a buy-and-hold investor are Abbott Laboratories (ABT 0.33%), Palantir Technologies (PLTR 4.80%), and Walmart (WMT 0.62%). These businesses have been generating strong results and make for safe long-term investments. 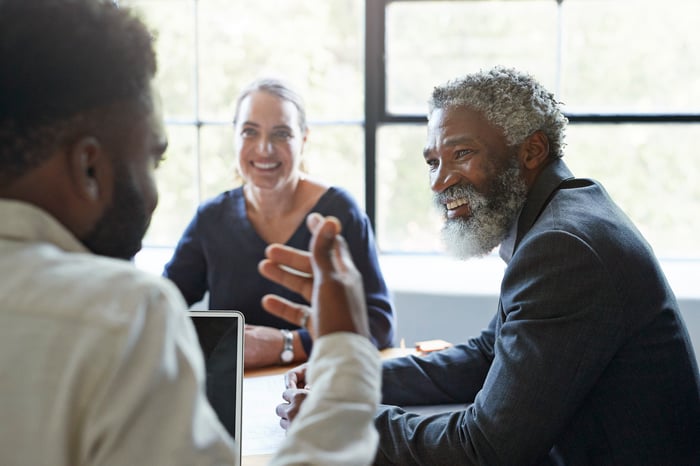 Abbott Laboratories is a robust healthcare business that makes for an ideal set-and-forget investment. While COVID-19 testing has given its top line some added growth, the company is diverse. That's one of the big reasons you can safely hang on to the stock for years or even decades.

When Abbott last reported earnings on July 22, its sales for the period ending June 30 topped $10.2 billion, up by nearly 40% year over year. Much of that growth did come from its diagnostics segment, where sales of $3.3 billion increased by an impressive 63%. However, medical device revenue was higher at $3.7 billion, up more than 51%. The company gives investors the best of both worlds -- its stock can benefit both from an uptick in COVID-19 testing and from a post-pandemic return to normal (as indicated by an increase in medical device sales).

Historically, Abbott has generated solid gross margins of at least 55% in each of the past five years. A strong margin is important to ensure that as the business grows, so too will its bottom line. In 2020, the company's operating profit of $5.4 billion was more than triple the $1.7 billion it earned just three years earlier.

Another reason Abbott is a good buy-and-forget stock is its dividend. Today, it yields 1.4%, which isn't much higher than the S&P 500 average of 1.3%. However, with the company just one more dividend increase away from becoming a Dividend King, it's safe to assume that you'll likely collect more on your initial investment over time. Whether you like recurring income or long-term growth (or both!), odds are you'll love Abbott Laboratories stock.

Tech company Palantir is another business that has the makings of a solid long-term investment. Not only is it growing at an impressive rate, but the company also has many government customers that rely on its software platform for help with counterterrorism operations, anchoring its financials. One of the company's opportunities for long-term growth is in expanding its commercial customers. Palantir has been doing this, though government-related revenue still makes up more than 60% of its top line.

In its second-quarter results (for the period ending June 30), Palantir reported revenue of $376 million, up 49% from the prior-year period. Particularly impressive was its U.S. commercial revenue, which grew at a rate of 90%. And the number of commercial customers was up 61% from the start of the year. Palantir maintains that its revenue will grow at an annual rate of at least 30% though 2025.

Although the company has continually reported net losses since going public a year ago, its adjusted earnings before interest, taxes, depreciation, and amortization (EBITDA) in Q2 totaled $121 million, making up 32% of revenue. And over the trailing 12 months, Palantir has reported positive free cash flow of $62 million.

With more growth on the horizon and the company already being cash flow positive, this is another promising stock that all growth investors should consider buying shares of.

Big-box retail chain Walmart is a business you know isn't going anywhere. Like Abbott, it also pays a modest dividend (1.5%), and it is two years away from becoming a Dividend King. For investors who love a boring stock that they can count on for recurring revenue, Walmart's an easy pick.

But that's not to say sales won't continue to grow. The business has been expanding into healthcare, and the launch of subscription service Walmart+ last year suggests that it is willing to take on e-commerce giant Amazon head-on for growth opportunities online.

A company the size of Walmart, which generated nearly $26 billion in free cash flow in its most recent fiscal year, can afford to spend money on multiple growth initiatives. While its gross margin of 25% isn't great, Walmart can still do well and turn a profit because of its sheer size; a small 2% net margin on $559 billion in revenue for fiscal 2021 still resulted in more than $13 billion in net income.

And while the surge in e-commerce sales may be slowing down from a year ago when consumers were stuck at home, the retailer still reported that U.S. e-commerce sales grew 6% year over year in its latest quarter, for the period ending July 31. Despite reopenings and more shopping options available to consumers, the company's sales growth remained positive, up 2.4% from the same period last year.

Walmart is the ultimate safe stock to buy for investors who just want an investment they won't have to worry about over the years.