Nintendo (OTC:NTDOY) was one of the most popular stocks of 2020. Propelled by the COVID-19 lockdowns and the hit title Animal Crossing: New Horizons, the Japanese video game company saw sales of its Switch platform soar last year to 28.8 million units across the globe.

Demand has slowed in 2021 with the company guiding for 25.5 million Switch (and Switch Lite) sales this fiscal year, which ends in March 2022. This has likely been a big reason for the stock's 25% decline year to date.

But Nintendo has some new products and partnerships coming down the pipeline to go along with a big holiday season that should help the company sustain its profitability. Does that mean Nintendo stock is headed for a turnaround to close out 2021? 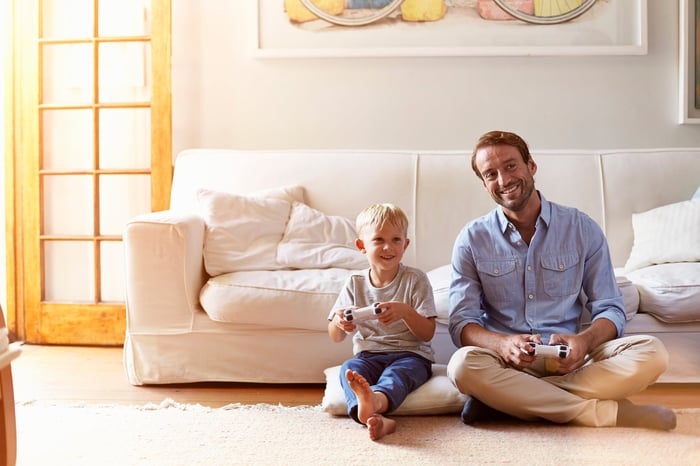 The business is doing well

The last quarterly update from Nintendo encompassed the three months ended June 30, its fiscal 2022 first quarter. Net sales were down 9.9% year over year with operating profit declining 17.3% to 119.8 million yen ($1.09 billion). The decrease in operating profit can be directly attributed to a reduction in software (game) sales during the period. Prior-year software sales totaled 50.4 million units, but they fell to 45.3 million in the latest quarter.

At first, this looks concerning, but investors should remember Animal Crossing: New Horizons sold over 10.6 million units for Nintendo in its fiscal 2021 first quarter (following the game's release in March 2020), and it is now the second-best-selling Switch title ever behind Mario Kart. One year later, Animal Crossing unit sales totaled just 1.3 million, and that difference more than makes up for the year-over-year software shortfall. All in all, gamers are still engaged with their Switch devices.

Hardware sales were also down in the quarter, but this was due to the drop-off in Switch Lite sales. The original Switch, a hybrid console and mobile gaming device, actually grew unit sales 8.5% year over year. Again, this shows there is sustained demand around the globe for Nintendo's core gaming console.

With a solid lineup of games coming this holiday season and in 2022, including Metroid Dread, Pokémon Legends: Arceus, and Splatoon 3, Nintendo may be able to sustain strong software sales over the next few years. This is the most important input for future operating profit and cash flow.

While the game lineup looks good, the most important product coming for Nintendo is the new Switch OLED device. The new model will have a bigger screen, brighter OLED display (hence the name), and 64 GB of storage. It will debut on Oct. 8 and pre-orders are already sold out across online retailers like Amazon, Walmart, and Target. If the Switch OLED sells well this holiday season, then Nintendo's results will surge over the next few quarters.

On top of the Switch OLED, Nintendo has a new mobile application coming out in a partnership with Niantic, the mobile and augmented-reality developer behind Pokémon Go. The new game is based on the Pikmin franchise and is set to launch sometime this year.

Last but not least, Nintendo is building theme parks around the world in collaboration with Comcast's Universal, and it has a new Mario movie coming out in 2022, produced by Illumination Studios. These two ancillary businesses won't drive top- or bottom-line growth, at least for a few years, but they're great ways for the company to introduce new people to its famous entertainment characters. In turn, this should drive more people to its highly profitable gaming ecosystem.

Valuation is cheap, but investors need to be patient

Backing out the $10.1 billion of cash on its balance sheet, Nintendo trades at 8.5 times its trailing-12-month operating profit. This looks quite cheap, especially when you consider the new Switch OLED and games lineup coming over the next year, plus the additional investments the company continues to make.

Management is guiding for operating profit to be down 22% in the current fiscal year to $4.57 billion. This would raise its valuation multiple to 10.5. However, investors should be aware that Nintendo tends to be very conservative with its guidance. For example, every year since fiscal 2018, Nintendo has beaten its operating profit forecast for the upcoming fiscal year. There's no guarantee the company will do so again in fiscal 2022, but there is a good likelihood of it doing so.

And this isn't to say Nintendo stock is set to soar near term. Management takes a long-term view, and we may be in the new year before the stock price recovers its 2021 losses. However, as long as the key business metrics remain strong, shareholders should be able to sleep well at night owning shares in this company.