Please ensure Javascript is enabled for purposes of website accessibility
Log In Help Join The Motley Fool
Free Article Join Over 1 Million Premium Members And Get More In-Depth Stock Guidance and Research
By Will Healy – Sep 18, 2021 at 6:15AM

Copying an expert could pay off with these stocks.

ARK Invest CEO Cathie Wood stands out to investors for generating consistently outsized returns. Her Ark Innovation ETF (ARKK -0.54%) has generated an average annualized return of 48% per year over the last five years. In recent weeks, she has gone bargain-hunting, picking up stocks that could boost her portfolio performance over time.

Admittedly, just because Wood finds a stock suitable does not necessarily mean every investor should consider a company a good fit. Nonetheless, Wood's recent purchases of growth stocks such as Palantir Technologies (PLTR -1.12%), Roku (ROKU 0.50%), and Teladoc Health (TDOC 2.42%) could serve most any type of long-term investor well. 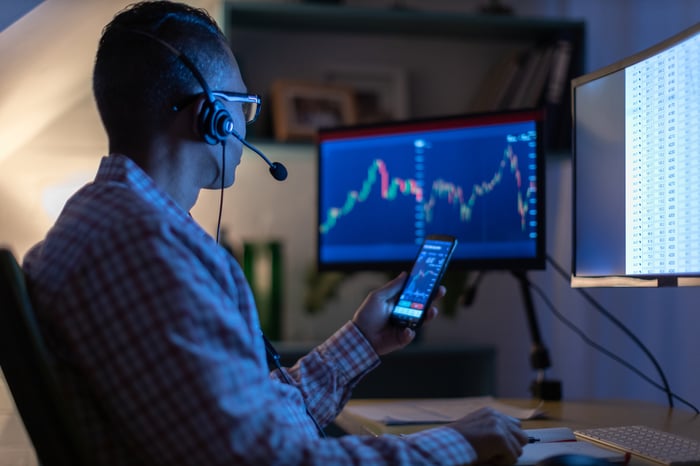 Known best for helping the U.S. government find Osama bin Laden, Palantir's data mining applications serve governments and businesses alike. Palantir delivers insights through its Apollo software, which works with both its Gotham and Foundry operating systems. This focus on insights differentiates it from Snowflake, which identifies itself as a complete database, or Salesforce.com's Tableau, which serves as a data visualization tool.

This specialization -- along with solid financials -- likely drove Wood to add more than 4.5 million shares to the Ark Innovation ETF beginning in early August, taking the total to almost 26 million shares.

Palantir reported revenue of $717 million in the first half of 2021, a 49% increase from the same period in 2020. The net losses during that time frame surged 59% to $262 million as stock compensation costs led to an 86% increase in general and administrative expenses. Still, the company projects annual revenue growth of at least 30% through 2025.

Admittedly, riding on only a 10% increase this year, the stock isn't on a hot streak. Also, while its 31 price-to-sales ratio may make it more expensive than Salesforce's sales multiple of 10, it remains much cheaper than Snowflake's P/S ratio of almost 100. Despite its high valuation and ongoing losses, Palantir's potential could make it a lucrative investment over time.

Wood also added positions in streaming giant Roku, adding about 490,000 since Aug. 5 to a position that stood at just over 2.9 million shares at the beginning of the month. The company has leveraged streaming technology to create an ad-based ecosystem that not only organizes viewer programming but also gives content providers a source of revenue.

Roku began as a neutral platform but later became a market participant through The Roku Channel. The acquisition of Quibi also made it a content provider through Roku Originals. These moves have given Roku a 30% market share worldwide according to Conviva, allowing it to hold its own against peers such as Amazon (with Amazon Prime) and Apple (with Apple TV+).

The power of this platform helped Roku earn revenue of $1.2 billion in the first six months of 2021, 80% higher than in the same period in 2020. This surge allowed it to turn a profit in the first half of the year, earning $150 million in net income. The company forecasts slowing revenue growth, but third-quarter forecasts for between $675 million and $685 million in revenue would still amount to a 50% increase at the midpoint.

Despite the revenue surge, Roku stock has gained little traction year to date. And its price-to-sales (P/S) ratio of 19 far exceeds Apple's and Amazon's sales multiples of seven and four, respectively. Nonetheless, with its colossal growth poised to continue, buying Roku could easily benefit Cathie Wood and those who follow her lead.

Wood has also taken advantage of stock struggles to add to her Teladoc position. The stock has fallen 30% this year and about 55% from its February high. Much of this drop is due to Amazon entering the telehealth market, leading some to speculate that Amazon might win in telehealth. Wood has taken advantage, adding over 310,000 shares in late July, taking that position to more than 8.4 million shares.

However, such fears may have helped smart investors like Wood buy a market leader on sale. Teladoc contracts with doctors across all 50 states and in multiple countries to deliver care over a personal device. It's used acquisitions to ensure its competitive edge. The purchase of diabetes specialist Livongo Health in 2020 gave Teladoc the ability to continually monitor patients by collecting blood pressure and glucose readings. This helps the company stands out over other providers who merely place doctors in call centers.

In the first half of 2021, Teladoc's $957 million in revenue represents a 127% increase from the same period in 2020. On the Q2 2021 earnings call, CEO Jason Gorevic said this increase occurred as consumers turned to Teladoc for a wider array of conditions. Also, Teladoc's loss increased to $333 million so far in 2021 as stock compensation, interest, and income tax expenses mounted.

Fortunately, the compensation expenses will not affect Teladoc's predicted 84% revenue increase in 2021 at the midpoint versus year-ago levels, assuming the 2021 revenue prediction of approximately $2 billion holds. Moreover, its P/S ratio has now fallen to 11, its lowest level since the beginning of 2020, and it only slightly exceeds upstart competitor Amwell's P/S ratio of nine. With this falling multiple and the discounted stock price, it looks like Wood may have bought yet another growth stock on sale.

As mentioned before, not all of Wood's picks suit every portfolio. Nonetheless, given the rapid growth of the industry and the ongoing efforts to differentiate itself from other telehealth providers, individual investors may want to consider following Wood into these stocks.