These are companies worth building your portfolio around for the long haul.

If you have $5,000 to invest, you're doing better than most. According to a recent survey from personal finance website The Balance, half of Americans have less than $250 left over at the end of the month. This means amassing five grand is a challenge for most.

I would like to share two growth stock ideas for those looking to invest $5,000 -- or less if that is beyond your reach. The point is that $5,000 is a large investment for most people -- and should be reserved for only top-tier businesses. In that light, I believe Pinterest (PINS 0.63%) and Latch (LTCH 1.06%) could be core positions in a diversified portfolio, regardless of what that dollar amount looks like in your particular case. In its most recent quarterly conference call, Facebook CEO Mark Zuckerberg proudly said, "There are now more than 3.5 billion people who actively use one or more of our services." With Pinterest's comparatively few monthly active users (454 million), many investors believed it would have no problem consistently growing its user base over the coming decade.

Investors were wrong, and Pinterest stock is down almost 40% from its all-time high as a result. In the first quarter of 2021, the site had 98 million monthly active users (MAUs) in the U.S. and 380 million internationally. By the second quarter, these numbers had surprisingly dropped to 91 million and 363 million, respectively.

I don't wish to fully gloss over this drop in user engagement; it is important and it's up to Pinterest's management to get things going back in the right direction. However, even though total MAUs were down 5% quarter over quarter, revenue was up a whopping 26% over this same time period. The reality is that Pinterest's revenue can indeed rise at a robust pace even if engagement drops.

Pinterest can do this because of the great advertising shift underway to digital channels from traditional outlets. Consider what CEO Jeff Green of advertising-technology company The Trade Desk told CNBC about what the pandemic did for the industry: "We were disproportionately hurt in the first month. And we've been disproportionately benefiting ever since."

Advertising budgets are transitioning to digital channels now more than ever. And it doesn't look like this tailwind to Pinterest's ad business will abate anytime soon. The company will keep growing revenue because of it. And if Pinterest can return to growing its user base, that will be sweet icing on the cake. For these reasons and more, now's a great time to buy some Pinterest stock. 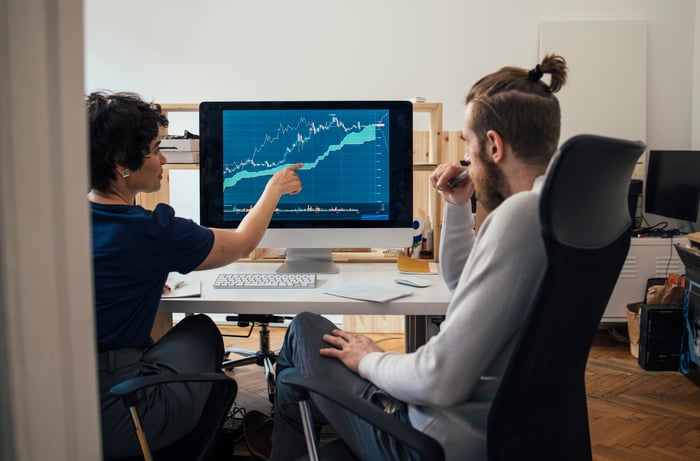 Property-technology company Latch offers landlords a smart-lock device, making it quick and easy for them to re-key the door when changing tenants. In addition, tenants pay a monthly fee to use Latch's operating system, allowing them to give apartment access to the right people (like package delivery).

I think a laughably high valuation and atrocious profit margins are causing most investors to mistakenly overlook Latch as an investment. The stock's price-to-sales valuation is 71 (hard-core value investors will tell you not to pay above a P/S of 2). And the company's hardware products currently have a gross profit margin of negative 12%, meaning they literally cost more to make than what they sell for.

However, Latch's P/S ratio doesn't paint a complete picture, because there's a big difference between sales and bookings. The company's smart locks and other devices are often installed in new multifamily complexes but not until toward the end of the project. When property owners initially agree to use Latch, they sign a multiyear contract up front and Latch recognizes it under bookings. But it's not until the building is actually built that Latch can finally recognize it as revenue.

This means Latch's sales naturally lag bookings. In the second quarter, the company had just $9 million in revenue, sending the P/S ratio through the stratosphere. But Latch had almost $96 million in bookings, up 102% year over year and ahead of management's previous guidance. Patience is needed for these bookings to finally be recognized as revenue.

Regarding profit margins, give Latch time to transform. It's true the company's hardware is sold at a loss. But once hardware is installed, Latch generates ongoing recurring revenue from its software, which has a gross margin over 90%. Right now, software is just 20% of total revenue. But by 2025, software revenue is expected to account for 65% of total revenue, completely transforming the company's profitability profile.

Latch came public through a special purpose acquisition company (SPAC) not a traditional initial public offering (IPO). Unlike IPOs, SPACs typically give multi-year financial projections. I don't find many of them credible; however, Latch stands out from this crowd by exceeding its bookings guidance so far. This lends credibility to its 2025 outlook. And with its profitability transformation, it expects to be a cash cow with almost $250 million in annual free cash flow.

With a market capitalization of $2 billion, Latch looks like a bargain for long-term investors if it continues on its current trajectory.

I believe that Pinterest and Latch are great companies to own over the next five years, providing both growth and value to investors today. And I've personally made both stocks core positions in my own portfolio.

That said, There's no magic formula for success in your portfolio. Pinterest's drop in users could accelerate, and Latch might start losing customers unexpectedly. It's important to keep solid investing practices like diversification in mind even when long-term opportunities look amazing -- as I think is the case with Pinterest and Latch.