Please ensure Javascript is enabled for purposes of website accessibility
Free Article Join Over 1 Million Premium Members And Get More In-Depth Stock Guidance and Research
By Kody Kester - Sep 19, 2021 at 7:21AM

Aside from the COVID-19-induced bear market in March 2020, the past few years have been difficult for income investors. The S&P 500's average yield has been less than 2% in 44 of the past 48 months, which can make it more challenging to find companies whose payouts are both attractive and sustainable.

But even in a market consistently reaching record highs, there do exist sanely priced stocks offering safe dividend yields that are double to nearly quadruple the S&P 500's current 1.3%. 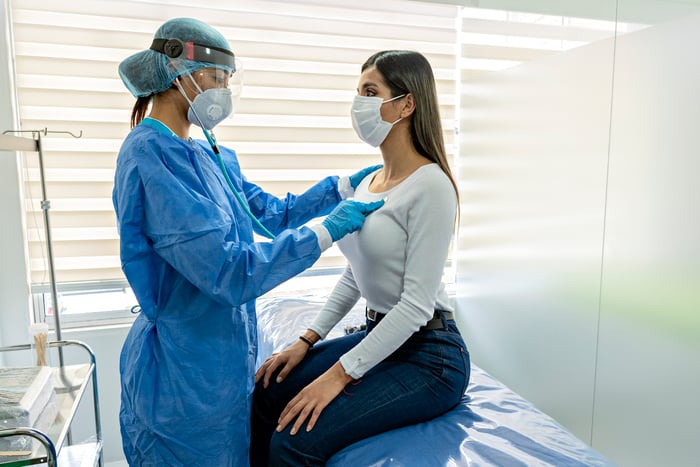 A diversified titan of healthcare

At $435 billion (by market capitalization), healthcare titan Johnson & Johnson is a favorite of many dividend investors for several reasons.

First, its business is well-balanced. The pharmaceutical segment is led by immunology drugs such as Stelara and Tremfya, and cancer drugs such as Darzalex and Imbruvica (which is co-owned by Johnson & Johnson and AbbVie). These blockbuster drugs are central to Johnson & Johnson's pharmaceutical segment, which made up 54.3% of the company's total first-half sales of $45.63 billion.

Another third of Johnson & Johnson's business is made up of the medical devices segment (29.7% of first-half revenue), including that treat cardiovascular conditions, orthopedic issues (i.e., knee and hip replacements), and other conditions that require surgical intervention. The remaining portion (15.9% of first-half sales) consists of its well-known consumer and household brands, such as Neutrogena, Zyrtec, and Band-Aid.

Johnson & Johnson's diversified business mix helped the company's revenue to edge slightly higher in 2020 despite COVID headwinds in the medical devices segment due to delayed elective procedures. And now that this division has fully recovered to pre-COVID levels, the company's revenue growth is set to accelerate compared with last year. Management forecasts total revenue growth of 10.5% to 11.5%, from $82.6 billion in 2020 to $91.3 billion to $92.1 billion in 2021 -- and that's excluding the revenue the company's COVID vaccine is expected to produce this year.

Based on the $4.19 in dividends per share that Johnson & Johnson will pay to shareholders this year, the company's dividend payout ratio will be in the low- to mid-40% range. And Johnson & Johnson has a flawless triple-A credit rating from S&P Global, which is what leads me to believe that its 2.6% dividend yield is the safest in all of healthcare.

These are all key reasons why Johnson & Johnson's 59-year dividend increase streak, which puts it in the rarified ranks of the Dividend Kings, is likely to continue in the years ahead. And conservative income investors can purchase shares of this healthcare stalwart for about 17 times this year's EPS estimates -- a discount given Johnson & Johnson's status as one of the steadiest businesses in the world. A $1,000 investment in Johnson & Johnson could purchase six shares based on the current price of about $165.

A tobacco giant on a mission

The gangbusters growth in HTUs helped to propel Philip Morris International's total volume 1.1% higher in the first half of this year compared with the year-ago period. In turn, its net revenue advanced 10% year over year, from $13.80 billion in the first half of last year to $15.18 billion this year.

The increased sales of more profitable, smoke-free products -- from 22.9% of first-half sales last year to 28.5% in the first half of this year -- caused Philip Morris International's adjusted operating income margin to expand 450 basis points, from 40.5% last year to 45% this year.

This strong outlook explains why the company recently increased its dividend by 4.2%, which is a solid growth rate considering Philip Morris International's current 4.9% yield. And investors can be confident that this yield is safe, based on a payout ratio in the high-70% to low-80% range for this year.

Finally, Philip Morris International appears to be offering safe, ultra-high yield at a reasonable price. This is supported by the fact that it is trading at approximately 17 times this year's EPS forecast, which is more than fair considering that analysts are predicting 12.6% annual earnings growth over the next five years. A $1,000 investment in Philip Morris International could buy nearly 10 shares of the stock at its current price of $103.