One of the more popular coronavirus stocks, Moderna (NASDAQ:MRNA), was struggling on Monday. Although it wasn't down by as much as the S&P 500 index, Moderna was still off by almost 2% in late afternoon trading. Positive news from a top rival was a key reason why.

It nearly goes without saying by now that that rival -- actually, rivals -- is the combination of Pfizer (NYSE:PFE) and BioNTech (NASDAQ:BNTX). After all, Moderna and Pfizer/BioNTech are the developers of the two major coronavirus vaccines currently in circulation around the world. 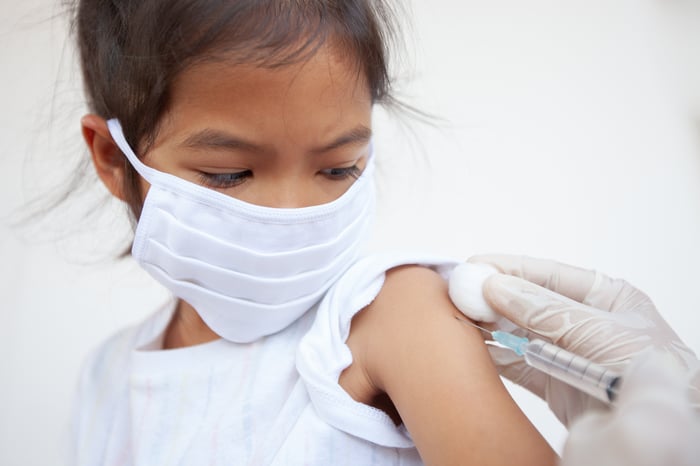 Monday morning, Pfizer and BioNTech announced the results of a phase 2/3 trial gauging the efficacy of their Comirnaty vaccine in children ages 5 to 11. The trial's 2,268 participants generally recorded a "strong immune response," from the vaccine, which was well tolerated with side effects similar to those of people 16 to 25 years of age who previously received the shots.

Pfizer and BioNTech aren't wasting any time with Comirnaty. The two companies said they aim to share the data from the new trial with the FDA, the European Medicines Agency that regulates the 27-member European union, and other regulatory authorities around the world "as soon as possible." They will also file for Emergency Use Authorization for that demographic from the FDA.

Moderna's efforts with that age cohort are ongoing. The biotech company launched the KidCOVE phase 2/3 trial, aiming to test its mRNA-1273 on children aged from 6 months to just under 12 years, in March.