Wall Street is worried about the potential fallout from a situation in China.

On Monday, all three major U.S. indices opened down and losses accelerated throughout the day. This sell-off was sparked by concerns regarding Evergrande Group, a property developer in China that some analysts believe will soon default on its debt. Wall Street is worried that the ripple effects could have a global impact.

However, while it's always smart to keep up with current events, market volatility is nothing new. This situation could resolve itself in a few days, or it could get much worse. Either way, downturns tend to be buying opportunities for long-term investors. With that in mind, Okta (OKTA -4.83%) and Tesla (TSLA -6.37%) look like smart places to put your money. 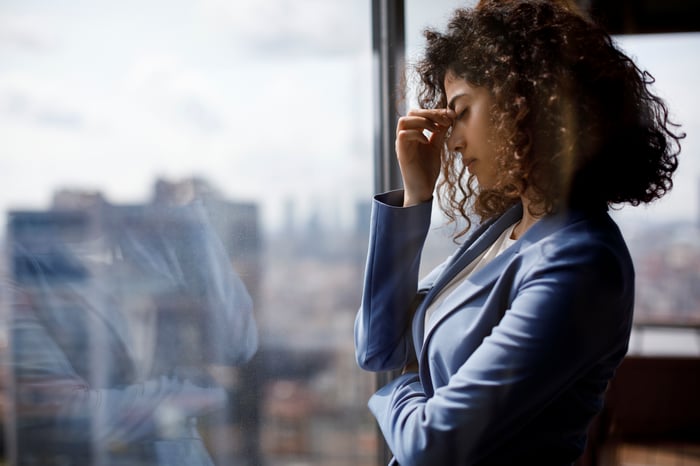 Okta specializes in identity and access management, a branch of cybersecurity that safeguards corporate resources by ensuring that only the right people can access them. To do that, the Okta Identity Cloud continuously validates credentials, allowing administrators to enforce access policies based on device, location, and risk score.

One important piece of this puzzle is Okta's Universal Directory. This product integrates with HR systems and other software, creating a single repository for identity profiles. Broadly speaking, the Universal Directory acts as the authentication engine, ensuring that users are who they claim to be.

Building on that, administrators can automate security by implementing adaptive multi-factor authentication. In these scenarios, Okta leans on artificial intelligence to determine the level of risk associated with each sign-on event. If something appears off, the user may be asked to verify their identity in a second way (i.e. multi-factor authentication). This creates a network effect, as every sign-on event makes Okta's AI models a little bit smarter.

However, Okta's greatest asset is its infrastructure-agnostic business model. Unlike its largest rival Microsoft, Okta does not own any infrastructure, meaning there is no perceived bias toward its own technologies. In fact, the Okta Identity Cloud integrates with over 7,000 applications and service providers.

That has been a significant growth driver for this tech company.

Looking ahead, Okta has plenty of room to grow its business. The company puts its addressable market at $80 billion, and management is executing on a strong growth strategy.

More broadly, trends like digital transformation and remote work have accelerated the need for zero-trust security, and Forrester Research recently recognized Okta as the leader in the identity-as-a-service market, citing a stronger current offering and stronger growth strategy than any of its rivals. That's why this growth stock looks like a smart buy.

In 2015, the former CEO of Daimler said: "[Tesla is] a joke that can't be taken seriously compared to the great car companies of Germany." He also called CEO Elon Musk a pretender. But the joke isn't so funny anymore.

Last year, the Tesla Model 3 surpassed the prestigious cars of Germany -- the BMW 3 Series, the Mercedes E-Class, the Audi A6 -- to become the best-selling premium sedan in the world. More importantly, the company captured an industry-leading 16% share of the electric vehicle (EV) market worldwide, and it did so with an industry-leading operating margin of 6.3%.

Musk has often said manufacturing efficiency would be one of Tesla's greatest long-term advantages. This statement was easily dismissed a few years ago, but that's no longer the case. As the company has boosted production capacity, its operating margin has trended upward, giving credence to Musk's claim.

Despite expanding its production capacity, the EV market has still grown faster than Tesla in recent years, and its market share slipped to 15% in Q2 2021. Even so, management is forecasting 50% growth in annual deliveries over a multi-year horizon. By comparison, Grand View Research believes EV unit sales will climb at 41.5% annually through 2027.

Put another way, Tesla believes it can outpace the industry in the coming years. And given the company's strong competitive position in the EV space -- not to mention its lead in the race to build a fully autonomous car -- I think this growth stock is a smart buy.

Keep your eye on the long-term

In closing, I'd like to remind readers that no one knows the future. While I believe it makes sense to buy stocks when the market takes a dive, no one knows how long this sell-off will last, and the market has already begin ticking back upwards today. So if you have some cash set aside in your portfolio, I recommend deploying that cash a little bit at a time. In other words, hope for the best, but plan for the worst.

Why Okta Stock Was Climbing Today
376%