These companies won't leave you guessing about the future.

Investing is about the future. Unfortunately, the future is unknowable. All anyone can do is take the information that's available and make an educated guess. However, some companies have much more predictable businesses than others. Many companies try to compensate for uncertainty by paying dividends.

Combine the two -- predictable businesses that pay dividends -- and you have a recipe for great stocks to buy during a market sell-off. Three of my favorites are Pool Corporation (POOL 0.54%), Intuit (INTU -1.36%), and Rollins (ROL -1.86%). Here's why. 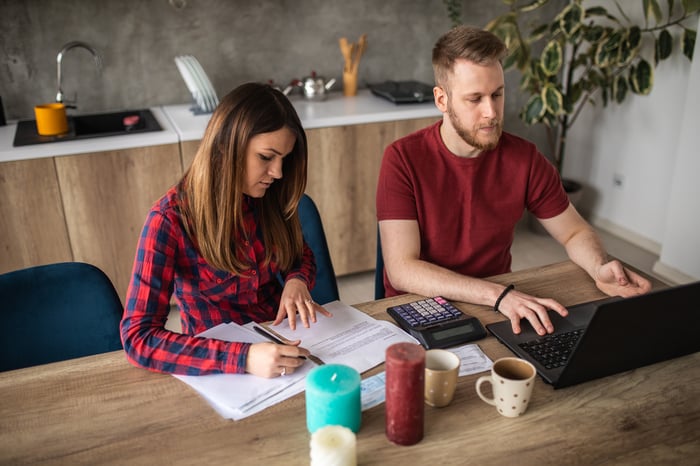 Pool sales skyrocketed during the pandemic. Some industry veterans saw orders surge 200% in the early days of lockdowns. There was such a flood of orders that by mid-year, some builders were having to tell customers they couldn't have their outdoor oasis until 2022. It was the same story around the globe.

Pool Corporation sells swimming pool supplies like chemicals and equipment to professionals and retail customers. The company saw sales jump 23% last year. That was significantly higher than the 7.5% it had averaged in the previous eight years. However, the real story is the predictable revenue all of those new pools will generate in the future.

For the first six months of 2021, Pool posted $2.85 billion in sales -- a 45.5% increase from the same period of 2020. Operating income grew 94%. Management raised guidance, saying it believes the strong demand and slate of projects will persist through the end of the year and beyond.

If that isn't enough to make shares interesting, consider that the company pays a dividend of $0.80 per quarter. While that's only good for a yield of 0.7%, the $3.20 per year is nearly five times higher than it was a decade ago. The company has increased that payout for 11 consecutive years. If you are looking for a company with high confidence in the future and a rapidly growing dividend, it's hard to find a better stock than Pool Corporation.

Intuit has been helping customers with their finances for decades. Its software -- Quickbooks for small businesses (and the self-employed) and TurboTax for consumer tax preparation -- are market leaders. Quickbooks has a reported 80% market share in the U.S. and TurboTax boasts an estimated 73%. It's incredible penetration into processes that occur over and over. That leads to very stable revenue for the company. In fact, it has compounded 10% annually over the past decade to $9.6 billion in the past 12 months.

Intuit has also made acquisitions that fit the model of having a portfolio of well-known brands. In 2009, it bought personal finance application Mint. Last year, it bought Credit Karma -- a free credit tracking tool -- for more than $8 billion. Recently, CEO Sasan Goodarzi announced the company would purchase customer engagement and marketing platform Mailchimp for $12 billion. Each was designed to give it deeper reach into its target customers so it could solve their problems and integrate its portfolio of solutions.

Thanks to the recurring nature of revenue and its dominant market position, the business prints cash. Free cash flow compounded at more than 13% over the last decade. That allowed Intuit to pay an ever-increasing dividend. It made its first distribution to shareholders in 2011 and has raised the payout almost 300% since. It adds up to a 16.4% annual raise.

What could be better than a company with a dominant market position printing cash and paying out an ever-increasing amount to shareholders? Not much. That's why I think it's one of the best dividend stocks to buy in a market sell-off.

One of my favorite business origin stories is that of Otto Orkin. He was known as "the rat man." And he founded Orkin Pest Control after he began selling poison door-to-door in Pennsylvania at the age of 14. More than half a century later, Rollins purchased his business.

Today, Rollins serves both businesses and consumers who are looking to get rid of all different kinds of critters. The company even provides home services like lawn treatment. It has come to be recognized as one of the most resilient businesses around. It even grew revenue through the 2008-2009 financial crisis and last year's pandemic.

Its $2.3 billion in annual revenue is as reliable as it gets. The dividend was, but it hit a speed bump. In January 2020, management marked 18 consecutive years where it raised the dividend more than 12%. Due to the pandemic, the payout dropped in 2020.

This January, the company got the distribution back on track by raising it to $0.08 per share -- or $0.32 per year. That's 14% higher than it was in 2019. Rollins has also announced a special year-end dividend every year since 2012. Those special distributions have amounted to an extra quarterly payout every year.

A pest control market that is estimated at $23 billion and forecast to grow 5% per year is the perfect industry for a steady player to slowly consolidate share over time. That's exactly what Rollins has been doing. With reliable revenue and a consistent and growing payout to shareholders, it's just the type of business that investors can rest easy owning. That's why I think it might be the best dividend stock to buy during any stock market sell-off.

These 3 Stocks Look Expensive, but Are Actually Cheap
363%