Please ensure Javascript is enabled for purposes of website accessibility
Free Article Join Over 1 Million Premium Members And Get More In-Depth Stock Guidance and Research
By Jon Quast - Sep 24, 2021 at 9:14AM

These three companies will help you play the long game. And $1,000 is enough to make your first move.

Investing in the stock market is great because your returns can compound over the long run. But this process takes time. Remember, stock investing legend Warren Buffett didn't become a billionaire until he was 55. But now, less than 40 years later, he's worth closer to $100 billion. Therefore, the sooner you get started, the better.

But the stock market regularly falls. For example, the S&P 500 has fallen by more than 10% on five occasions over the last 20 years. The trouble is, you never know when a crash is imminent or whether now is a temporary peak. Therefore, to overcome the futile exercise of timing the market, you can spread investments out using dollar-cost averaging, investing a set dollar amount over time. That way, you can overcome trying to time the market and still get compounding working in your favor right now.

Based on this, I believe people should make investing a regularly scheduled event. And I practice what I preach. Over just the past month, I've put my own money to work -- based on a predetermined schedule that works for me -- by starting positions in Lam Research ( LRCX -0.01% ), Zynga ( ZNGA 5.89% ), and Upstart Holdings ( UPST -3.06% ). Here's why investing $1,000 in these three stocks as part of a regularly scheduled plan could be a great idea.

One of the most unstoppable trends

Lam Research manufactures systems and subsystems necessary for making semiconductor products -- the "stuff" that makes electronics work. While the industry does ebb and flow, it's generally trended higher long term as everything around us gets smarter and more digital. Thinking 10 years into the future, I can't fathom semiconductors being any less important than they are now. It seems we will only need a higher quantity of chips with more highly advanced capabilities, benefiting companies like Lam Research in the long run.

I suspect the semiconductor industry is nowhere near its peak, and industry research confirms this. According to a recent report from World Semiconductor Trade Statistics, the worldwide semiconductor market is expected to grow 25% from the end of 2020 through the end of 2021. And it's expected to grow another 10% in 2022. Research from Statista also confirms this general trend, calling for 20% growth this year and 9% next year.

Lam Research's biggest competitor is Applied Materials. I believe both are good companies, and the market is big enough to support them both. However, regardless of which is the top company, here's why I think Lam Research will stay at least among the best in the business. Over the past 12 months, the company has spent over $1.5 billion on research and development. That's 22% of its gross profit over that time, demonstrating its commitment to keep its leadership in the space. As long as it's spending like this, it will be hard for smaller rivals to catch up.

Lam Research's industry is growing, and it's spending to stay at the front of the pack. But despite this spending, the company is still solidly profitable today and rewarding shareholders via share repurchases and dividends. In fact, regarding the dividend policy, Lam Research just raised its quarterly payout by 15%. The payouts have now quintupled over the past five years, and there's still room for more raises down the line. Therefore, this seems like a good stock to buy for the long term. 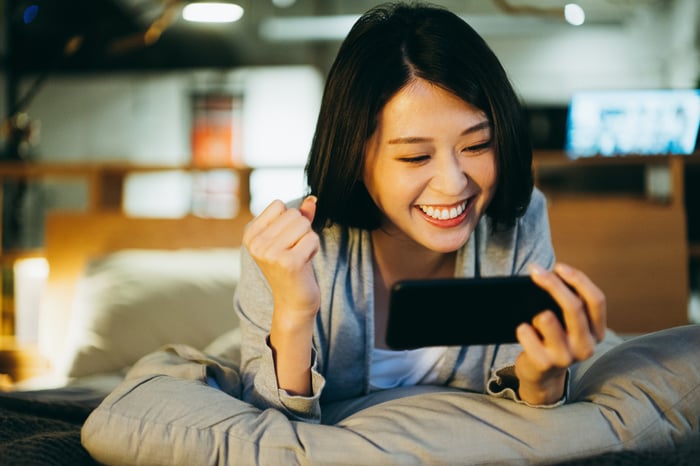 Mobile video game developers like Zynga can monetize games in multiple ways. They can let consumers buy the games up front, or they can allow free play while selling in-game content. But advertising is Zynga's third monetization strategy, and investors may have underappreciated that tactic. As of the second quarter of 2021, most of Zynga's revenue came from selling in-game content. Just 18% came from ads. This is an opportunity.

Thinking broader than Zynga, the advertising industry faced major disruption in 2020 because of the pandemic. People were at home and routines were shuffled, causing the effectiveness of traditional advertising media to drop. And because there was uncertainty, advertisers pulled back spending. The budgets that remained were directed toward digital channels, some for the first time, to better capture consumers' attention.

According to Statista, overall ad spend fell in 2020. However, despite the overall decline, spending for digital ads grew. According to the Interactive Advertising Bureau, digital ad spend was up more than 12% for the year. The pandemic pushed digital ad adoption, and it doesn't appear advertisers are going back to the way things were. Not only will digital channels retain their new business from 2020, GroupM also expects the digital ad market to grow another 33% this year.

This means that digital channels are suddenly being flooded with demand from advertisers like never before. And even video games are becoming valuable ad real estate. Zynga's results reflect this. Second-quarter ad revenue may have only been 18% of total revenue, but it was up 111% year over year.

To better capture this growing opportunity, Zynga acquired ad-tech company Chartboost in August. The acquisition has multiple benefits, among them better profit margins from advertising thanks to its new vertical integration. In other words, Zynga's ad business should not only be growing because of macro trends, but it should also get more profitable because more of the technology is in-house. 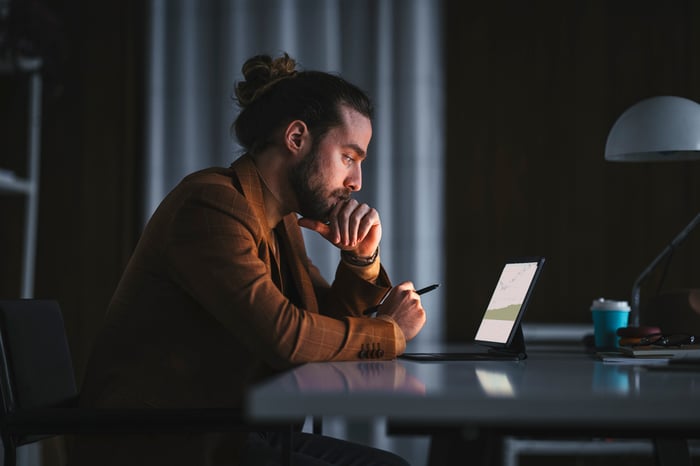 Did I buy this stock way too late?

As of this writing, shares of Upstart are up over 650% year to date. But I missed the majority of this run. I only bought a little for my portfolio just recently. But don't misunderstand: I didn't buy Upstart stock because I have a fear of missing out (FOMO). On the contrary, its parabolic move in 2021 seems too much too fast, and I wouldn't be surprised if the stock gets a major haircut in the near future. These kinds of quick returns aren't normal.

Upstart has artificial intelligence software that improves the lending service on both sides of the transaction. The AI analysis helps people get better terms on loans, and it also lowers lending risks for banks by decreasing the default rate. Right now, the company is very strong. In the second quarter of 2021, revenue was up over 500% from the same quarter two years ago. This revenue stream is extremely profitable with a 19% net profit margin (rare for a young company), resulting in $37.3 million in net income for the quarter. And it's sitting on an immaculate balance sheet of $600 million in cash and no debt.

However, as strong as it is, Upstart looks like it's about to get even stronger. Consider that AI software improves with more data. Because the company currently has 25 bank partners, it's able to build its data faster than competitors. And in a recent interview on CNBC's Mad Money, CEO Dave Girouard said that he expects to have hundreds of bank partners within a couple of years. This would widen Upstart's AI moat incredibly.

If Girouard is right, then I expect Upstart will be a much bigger company in 10 years than it is today. Of course, the stock might get hammered at some point, and I wouldn't be surprised. But by the same token, I have no way of knowing that will happen. Based on what I know, Upstart is a strong company that is about to get stronger. And that's something I want to own for the long haul.

This investing journey isn't over by a long shot

To bring this full circle, I believe $1,000 would be well used by buying shares of Lam Research, Zynga, and Upstart. But remember, I'm talking about using dollar-cost averaging to your advantage and building a position over time. I'm playing the long game and not rushing into full positions right away. For me, all three of these companies are small positions in my portfolio: less than 1% each.

Fortunately, most brokers allow you to buy fractional shares, so you can invest a dollar amount instead of having to buy whole shares. That's helpful when using dollar-cost averaging, especially considering the price per share is high for both Lam Research and Upstart. But because of fractional shares, there's no reason to buy a whole share at the start if that's not what works for you.

4 Stocks to Buy on Sale

3 Stocks That Can Double Again in the Fourth Quarter

3 Hot Stocks to Buy in August