These stocks together offer exposure across the entire oil and gas value chain.

Crude oil prices have been largely above $60 per barrel for nearly eight months now, and energy stocks have consequently recovered some of their last-year's losses. The S&P Energy Select Sector Index is up nearly 25%, outperforming the S&P 500 Index's 16% rise in 2021. Though energy-sector stocks tend to move with commodity prices, they offer solid dividend income for long-term investors.

If you're looking to invest $5,000 in energy stocks, you should do well by equally dividing the amount in the below five stocks. Involved in production, storage, transport, and refining activities, these companies offer broad exposure to the oil and gas market. They also offer attractive dividend yields ranging from 5.5% to 8.3%.

Chevron's recent performance is superior to ExxonMobil, though that hasn't always been the case. 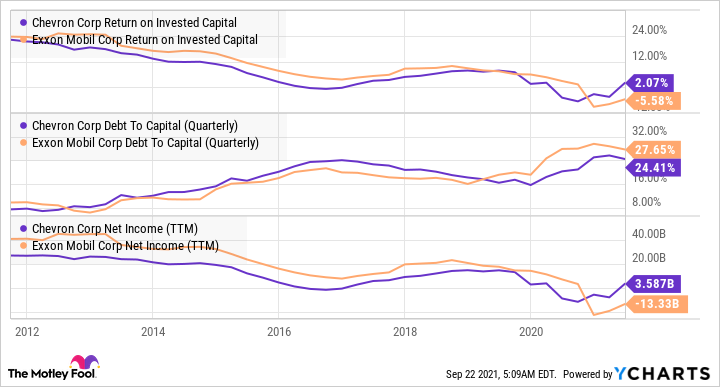 As the above graph shows, Chevron's returns on invested capital have exceeded that of ExxonMobil lately. Similarly, ExxonMobil's debt-to-capital ratio has been higher than that of Chevron for the last couple of years.

Chevron's stronger balance sheet gives it an edge over ExxonMobil today. With a dividend growth streak of 34 years, Chevron stock will make a solid addition to your energy portfolio.

Pipeline operator Enterprise Products Partners' (EPD) stock offers an exciting dividend yield of 8.3%. While that kind of yield is usually associated with high risk, that doesn't seem to be the case here.

The master limited partnership has increased its distribution for 22 consecutive years. With a financial debt to EBITDA (earnings before interest, taxes, depreciation, and amortization) ratio of nearly four times, Enterprise Products has the most conservative balance sheet among its peers. The company's fee-based contracts provide it with relatively stable cash flows, irrespective of short-term commodity price fluctuations.

Enterprise Products Partners posted strong performance in the second quarter, generating a distributable cash flow of more than 1.6 times the distributions for the quarter. The company expects to spend $1.7 billion on capital projects in 2021, which should continue to support its earnings growth. 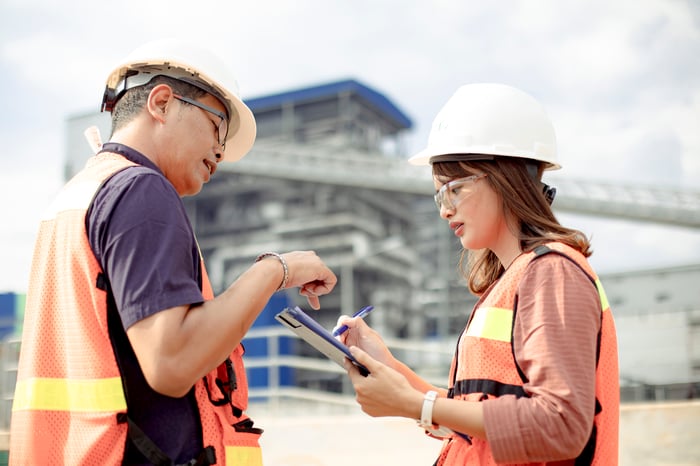 With a dividend yield of 5.5% as of this writing, TC Energy (TRP 0.33%) looks like a steal. The company generates utility-like cash flows from its regulated and long-term contracted assets. TC Energy has a projects pipeline of roughly 21 billion Canadian dollars, which should continue fueling its earnings growth. The company has increased its dividend for 21 straight years.

There are two factors to consider here, though. Canadian oil production has largely been on an upward trend, and that's been a longtime concern. Moreover, new pipeline projects are finding it difficult to get the needed regulatory approvals, which makes existing capacity -- like that of TC Energy's -- more valuable.

Kinder Morgan (KMI -1.50%) has come a long way from 2014, when the company had to cut its dividend due to high debt and low commodity prices. The company has steadily worked on strengthening its balance sheet since then. Its debt-to-EBITDA ratio has improved from more than 9 in 2016 to around 5 times now. It has reduced its net debt by more than $12 billion in six years. 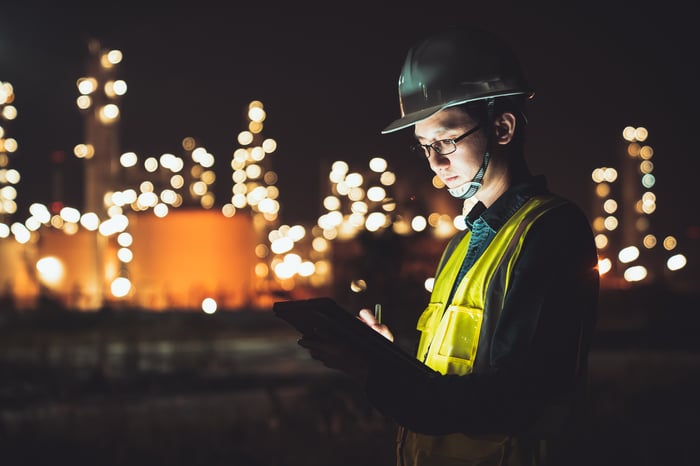 Among refiners, Valero Energy (VLO -2.74%) looks interesting. In the second quarter, Valero reported an adjusted net income of $197 million, compared to an adjusted loss of $504 million in the pandemic-affected year-ago quarter. The company has one of the lowest debt-to-capital ratios among independent refiners.

Maintaining a strong balance sheet is among Valero's top priorities. It targets a net-debt-to-capital ratio between 20% to 30% in the long run. In addition to crude oil refining, Valero Energy is focusing on renewables. It intends to quadruple its renewable diesel production capacity by 2023. It's also focusing on other opportunities in the renewables segment, including carbon sequestration and renewable hydrogen.

Big Oil Is Betting Big Money on This Renewable Fuel
357%