Shares of Vir Biotechnology (NASDAQ:VIR) were sinking 18.1% for the week as of the market close on Thursday. Vir was pulled down by the overall stock market sell-off earlier this week. However, its shares really took a dive after Goldman Sachs analyst Paul Choi downgraded the company from buy to neutral.

It's best to avoid making investment decisions based on analysts' downgrades (and upgrades, for that matter). However, you can sometimes learn things by understanding why a given analyst is bearish about a given stock.

In this case, though, Choi actually isn't bearish about Vir. Yes, he downgraded the biotech stock, and even lowered his 12-month price target. However, that price target still reflects a 14% upside from the stock's closing price at the end of last week and a 39% premium to the current share price. 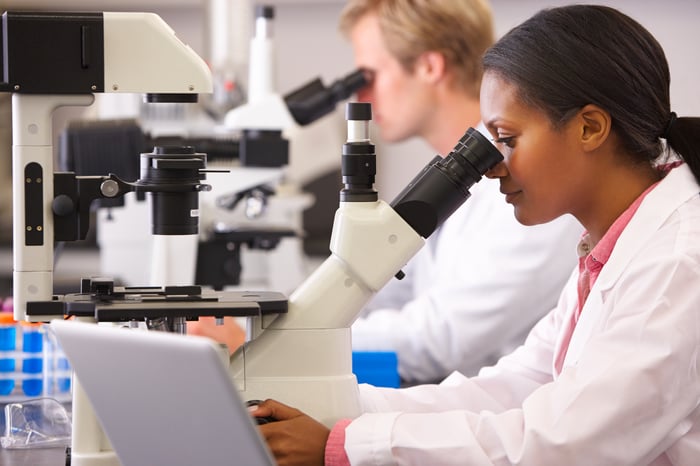 Vir and its partner GlaxoSmithKline (NYSE:GSK) appear to have a winner with monoclonal antibody sotrovimab in treating COVID-19. Sotrovimab has won Emergency Use Authorization (EUA) in the U.S. and authorizations or approvals in several other key markets, including the European Union. Australia recently quadrupled its order of the monoclonal antibody after physicians reported positive results in treating COVID-19 patients.

Vir should have several potential catalysts on the way. GlaxoSmithKline and Vir plan to file for full U.S. Food and Drug Administration approval of sotrovimab later this year. Results from a late-stage study of the therapy in treating mild-to-moderate COVID-19 are expected within the next few months.

Vir also expects to report initial data in the first half of 2022 from a phase 2 study of a combination of VIR-2218 and VIR-3434 as a potential cure for chronic hepatitis B virus infection.