These yields may seem low, but you'll likely be earning much more on your initial investment over time.

Dividend growth stocks can make for underrated investments. Although their yields might be just a few percentage points today, annual rate hikes could result in earning much more on your initial investment over time. For example, a company that grows its payout annually by an average of 7.2% would double its dividend payments within 10 years.

But you also don't want to take on too much risk with a dividend growth stock since there's no guarantee the payouts will continue. Becton, Dickinson (BDX -2.44%) and Costco Wholesale (COST -1.19%) are two stocks that look poised to keep increasing their dividend payments and aren't risky buys. 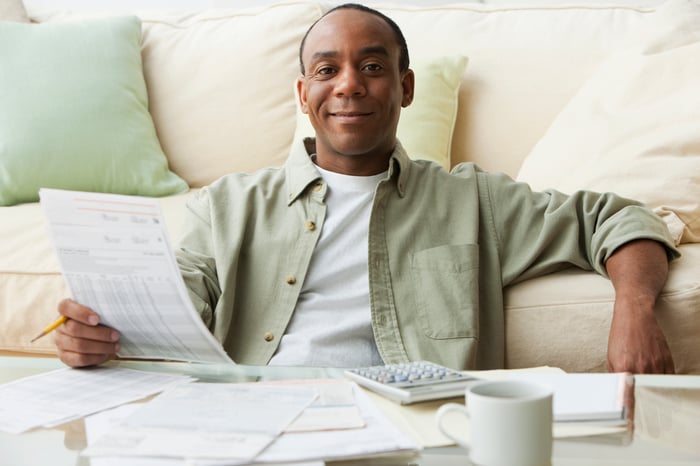 Medical supply company Becton, Dickinson currently pays its shareholders a modest dividend yield of 1.3%, which is right around the S&P 500 average. But it's been growing those dividends steadily for a long time, and there's a lot to like about the business.

Thanks to a broad array of products and services, Becton has weathered the challenges of COVID-19 and continued to post strong numbers. For the nine months ended June 30, revenue totaled $15.1 billion, up 23% over the year-ago period, and net income more than doubled to $1.8 billion.

In its latest results, the healthcare company noted that it was "recovering to pre-pandemic levels." Each of its major business units -- medical, life sciences (excluding COVID-19 testing), and interventional -- were up compared to the same period in 2019.

Plus, the business has generated a solid profit margin of 10% over the trailing 12 months. And with a diluted per-share profit of $6.33, that's easily enough to cover the $3.32 that it will pay in dividends per share this year, putting its payout ratio at just over 50%.

No only can the company afford to increase its payouts, but it has an incredibly large incentive to do so. A dividend increase this year would mark the 50th consecutive annual hike it has made, putting Becton into an exclusive group of Dividend Kings. Companies that fall into that category are regarded as among the safest dividend growth stocks. So you can bet that unless something drastic happens with the business, it will likely keep that streak going.

The rate of dividend growth has been good too. Over five years, the company has increased its dividend payments by a compound annual growth rate (CAGR) of 4.7%. If Becton has been able to raise its payouts all this time -- including a pandemic year -- that's a good sign of its stability. And it could make for an ideal stock to just buy and forget about.

Big-box retailer Costco is another solid dividend stock to consider. Not only was it stable during the pandemic, but the company thrived as consumers stocked up on day-to-day essentials. And the business remains in good shape today.

Costco just released its fourth-quarter earnings and net sales rose by 18% year over year to $61.4 billion. Net income came in 20% higher at $1.7 billion. While e-commerce sales growth of 11% wasn't anywhere near the 91% increase investors saw a year ago, the company continued to build on those numbers while delivering a solid overall growth rate.

And despite a profit margin of less than 3%, the company's $190 billion in revenue over the past four quarters leaves it plenty of profit to help pay the dividend. Its diluted earnings per share of $10.60 during that time puts the company's payout ratio at just 30%.

The dividend yield you'll initially get from Costco isn't so impressive; at just 0.7%, it won't take much time to find a higher payout among stocks out there. But it's been increasing those dividends at a good clip. Five years ago, Costco was paying a quarterly dividend of $0.45. It has increased those payouts by 76% since then, averaging a CAGR of 12%. If the company were to keep that rate of increase going, the dividend would double after about six years.

And it's been hiking the dividend since 2005. True, that isn't as long as a Dividend Aristocrat -- let alone a King like Becton, Dickinson is about to be -- but over time, Costco looks to be a safe bet to end up there.

What's more, the company last year rewarded shareholders with a special dividend of $10 per share -- more than three times its annual payout right now. While shareholders shouldn't expect something like that all the time, it demonstrates the company's commitment to rewarding and distributing its wealth out to them.

Whether you see it as a recovery stock or as one that will benefit from stay-at-home orders,  Costco looks to be a solid and safe income stock to own for the long haul.