Buying stocks can benefit investors of all ages. And the younger you are the more time is available for those investments to compound. But today's market full of biotech and artificial intelligence companies can be intimidating for those a little later in their investing journey. It's understandable if much of it sounds like science fiction to someone born between 1946 and 1965 -- a baby boomer.

Thats why we asked three Fool.com contributors which stocks they think that generation should target. The goal was to pick companies serving customers familiar to an older generation. They offered Acushnet Holdings (GOLF 0.34%), Walt Disney (DIS -3.79%), and Palantir Technologies (PLTR -2.78%). Here's why. 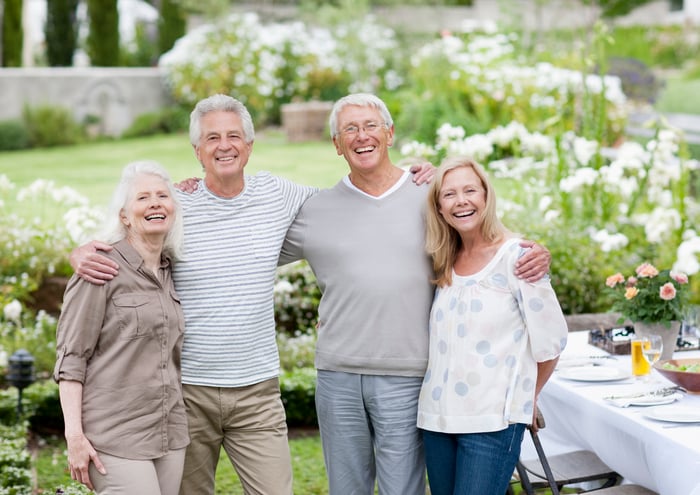 Jason Hawthorne (Acushnet Holdings): Golf has been called "a good walk spoiled." It's unclear who said it first.  But young people are likely to agree. Data from as long ago as 2005 showed kids were dropping out of the sport. By 2014, estimates showed millennials were golfing 36% less than at their peak. It has led just about everyone to view golf as a sport for older people.

But the pandemic -- and the need to find leisure activities outdoors -- brought a slight resurgence to the game. In fact, the 24.8 million golfers in 2020 was a 2% increase over 2019. That might not seem like much. But it was the biggest increase in nearly 20 years. Acushnet Holdings and its well-known golfing brands are reaping the rewards.

Anyone who has ever sunk a long putt or watched someone do it on television has heard of Titleist, FootJoy, and Pinnacle. These are a few of the names in Acushnet's portfolio of golf apparel and equipment. Specifically, the company designs, manufactures, and distributes everything from golf shoes, balls, and gloves to wedges, putters, and traditional apparel.

Prior to the pandemic, annual sales had climbed slowly since the company went public in 2016.  The pandemic has changed that. At least for now. The $1.2 billion in revenue for the first half of 2021 came in 35% higher than the same period of 2019. Net income was 126% higher.

Another thing investors closer to retirement might enjoy is the dividend. The company pays $0.165 per quarter for a 1.3% yield. The distribution began a year after its initial public offering and has increased each year since.

It might not be a household name unless your television is usually set to the Golf Channel. But Acushnet Holdings is riding a golfing renaissance to growth, profits, and increasing dividends. That could be exactly what investors frustrated by the current markets are looking for.

Jon Quast (Walt Disney): In the first Avengers movie, secret agent Phil Coulson says to Captain America, "People might just need a little old-fashioned." And I think it's applicable for investors right now. With the incessant buzz from meme stocks, cryptocurrencies, and non-fungible tokens, it's easy to be overwhelmed. But I believe investors of any age can do well by sticking with an old-fashioned investment like The Walt Disney Company.

A Disney investment thesis starts with the incredible durability of its intellectual property. For example, Mickey Mouse was created almost 100 years and yet the character continues to entertain children around the world. The company just opened a Star Wars-themed hotel that runs a family of four an eye-popping $6,000 for a weekend stay even though the first film was released way back in 1977. Also created in the 1970s was Marvel's Shang-Chi, a property that Disney is using to dominate the box office right now.

This vast library of valuable intellectual property allows Disney to profit in many ways. In 2019 (prior to the pandemic), 38% of the company's revenue came from its theme parks segment, 36% came from its media networks, and 16% came from movies. Just a small percentage came from its direct-to-consumer segment.

Through the first three quarters of its fiscal 2021, Disney's theme park segment accounted for just 23% of total revenue -- a significant drop from 2019's normal. This segment's revenue plummeted 37% year over year in fiscal 2020 and still hasn't recovered as the COVID-19 pandemic drags on. But the company has offset this struggle by pulling perhaps the greatest optionality lever of all time with its DTC subscription service, Disney+. In less than two years since launch, Disney+ already has 116 million subscribers.

Disney was a dividend stock prior to the pandemic. It suspended the payout last year as did many other companies. But dividends are typically for mature companies with low growth prospects. Perhaps this described Disney before the pandemic. But now this spry company is reluctant to bring back the dividend because it has such a great opportunity in front of it with Disney+. For now, its excess cash flow is dedicated to increasing this growing revenue stream. In other words, Disney+ has Disney acting like a youthful growth company again.

Regarding Disney's other revenue streams, it's true they are still being held back by the ongoing pandemic. And we don't know when the pandemic will end exactly. But I feel confident that it will. And when it does, I expect Disney's theme park and movie segments to thrive as in days past.

In short, Disney is a safe stock, a growth stock, and one that will have a large tailwind once it can operate normally again. It might look stodgy to some, but it might just be the kind of old-fashioned company your portfolio needs.

Get a piece of the big data revolution

Keith Noonan (Palantir): With Palantir valued at roughly 37 times this year's expected sales, it might not immediately stand out as a go-to stock for investors who are in, or nearing, retirement. On the other hand, I also think baby boomers have a lot to gain by keeping an eye on worthwhile growth plays. Just as there's a good case to be made for owning a top-tier, growth-dependent business like Amazon, I think investors of all ages will be rewarded for building positions in Palantir.

For starters, Palantir may not be as risky as its forward-looking valuation implies. The company is a far-and-away category leader in its corner of the data analytics services industry, and it's already secured major contracts with government agencies including the FBI, CIA, National Security Agency, the Army, and the Centers for Disease Control and Prevention, among others.

The upside here is that sales to government organizations tend to be pretty reliable, and there's a good chance that public sector demand for the company's artificial intelligence-powered services will see strong growth through the next decade and beyond. Whether you're talking about security, health initiatives, or transportation, the ability to gather and analyze valuable data has never been more crucial to mission success.

Even better, Palantir's big data analytics services are seeing rapidly expanding adoption among private sector customers. Last quarter, the company managed to increase its overall revenue 49% year over year, and sales to business customers were up a whopping 90% in the period. Thanks to impressive momentum in both the public and private sectors, management expects that the company will be able to grow sales at a greater than 30% annual rate each year through 2025.

Palantir is already one of the most popular stocks among traders on the Robinhood Markets trading platform, which indicates it's quite the hit in the millennial and Gen Z age demographics. However, the company also has a lot to offer baby boomers. This is one meme stock that has the potential to bridge the generational divide.