The company is likely on a multi-year upswing that can carry its stock even higher.

Working behind the scenes to supply food and related products to its customers around the country, Performance Food Group (PFGC) isn't exactly a household name, but it is seeing a lot of success.

The company just announced an important acquisition, giving it a new angle for revenue generation while cooking up tasty profits in its existing sectors too. Here are three reasons you might want to consider buying the stock this fall.

1. Its results are living up to its name -- mostly

Describing itself as the second-biggest American food distributor, Performance Food has in fact been outperforming lately. It reported its fiscal fourth quarter and full-year 2021 results on Aug. 19, beating analysts' expectations for both revenue and adjusted earnings per share (EPS). Quarterly revenue of $9.3 billion soared 61.1% year over year, while $0.56 in adjusted EPS marked a major reversal from the year-ago period's $0.86 loss. Full-year revenue jumped 21.2%, while net income and EPS also turned positive after a challenging fiscal 2020. 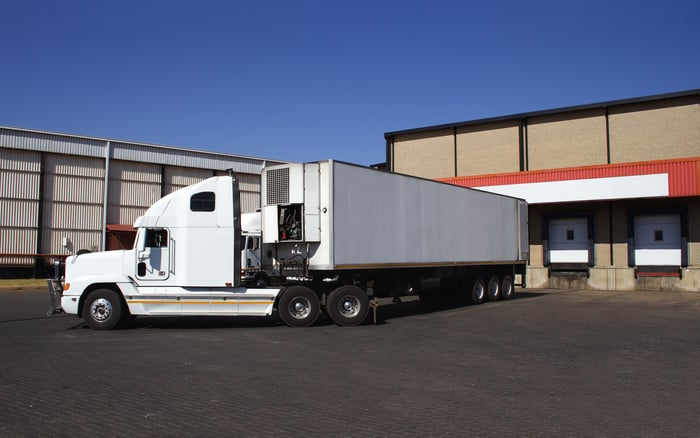 Though promising, the strong gains are due in large part to Performance Foods' acquisition of Reinhart Foodservice in late 2019 (more on that later). About $6 billion of Performance Food's fiscal 2021 top line came from Reinhart. Without that contribution, the company's revenue declined slightly for the year.

Keeping the Reinhart deal in mind, comparing the latest results to fiscal 2019's pre-pandemic reporting provides a big-picture look at the company's strong position going forward. Fiscal 2021 revenue was up 54.0% on a two-year basis. On the bottom line, the pandemic's impact on expenses is still apparent as net income in this latest year was down 75.6% from 2019. But Performance Food's business is quickly regaining momentum as the latest quarter saw record-setting sales, a 55% increase in case volume, and a similar jump in adjusted EBITDA.

Branching out to improve its growth is another important part of Performance Foods' strategy. The company just closed its buyout of Core-Mark Holding Company, a food distributor serving convenience stores. With its expansion in this market, management expects the deal to be accretive to EPS in the first full year with $40 million in cost synergies realized in the third full year after the deal closes.

During the latest earnings call, CEO George Holm said convenience store sales represent a $110 billion addressable market with about half of that being in food service, the company's area of specialty. Holm described how convenience stores "continue to shift away from low-margin tobacco products toward more food service, boosting both sales and profit growth long term."

Performance Foods' ability to make successful acquisitions is also highlighted by its purchase of Reinhart Foodservice. According to the latest earnings report, Reinhart contributed $2.5 billion in revenue during fiscal 2020 and $6.0 billion in fiscal 2021, making up a significant portion of the company's overall gains. Holm noted during the call, "[I]ntegration of Reinhart continues to progress at or above expectations, and we expect this momentum to continue into fiscal 2022." Core-Mark looks like another smart addition in the same vein.

A very bullish factor in interpreting Performance Foods' results is that, while the restaurant sector is recovering, the company is generating strong gains well before the food service rebound is complete. In the second quarter of 2021, restaurant spending surged 32% year over year, according to research from The NPD Group. However, there is still a considerable runway of recovery remaining. NPD analyst David Portalatin told industry website Dairy Processing, "[T]he U.S. restaurant recovery is underway, but it will take time for it to return to pre-pandemic levels fully."

Market research firm Datassential predicts ongoing sales growth, too. Its number-crunching led to a forecast of $701 billion in 2021 restaurant sales, up 15.4% from 2020. However, food service sales are expected to continue surging, rising 9.5% to $771 billion in 2022 and another 6.0% in 2023. That means Performance Foods should continue benefiting from at least two years of growing food service demand.

Its convenience store expansion via Core-Mark also appears to be timely based on recent traffic data. The National Highway Administration reported a 14.5% year-over-year surge for vehicle miles driven in June, and that metric rose 13% for the first half of 2021. The return of drivers to America's roads provides indirect support for the company's guidance regarding its new subsidiary.

Overall, the company is right where it needs to be to stand out as a winner among food stocks for at least several years, making it a solid pick for long-term investors.

Why Performance Food Group Stock Jumped 13.5% in the First Hour of Trading Today