Each of these three stocks offers yields that more than double the S&P 500's current yield.

Great investors know that the key to successful long-term investing is to focus on stocks that boast a meaningful presence in industries that will grow for decades. In looking for trends, we seek something that will impact the world by generating billions of consistent customers. Where better to look than the aging population that is growing significantly around the world. The United Nations anticipates that the global population over the age of 65 is expected to surge from 727 million people in 2020 to over 1.5 billion people by 2050.

A noteworthy increase in the global elderly population is sure to result in a greater need for healthcare services, such as prescriptions. This is a huge area for biotech companies to maximize their potential. These three large-cap biotech stocks are sure to benefit from strong future demand for their products. 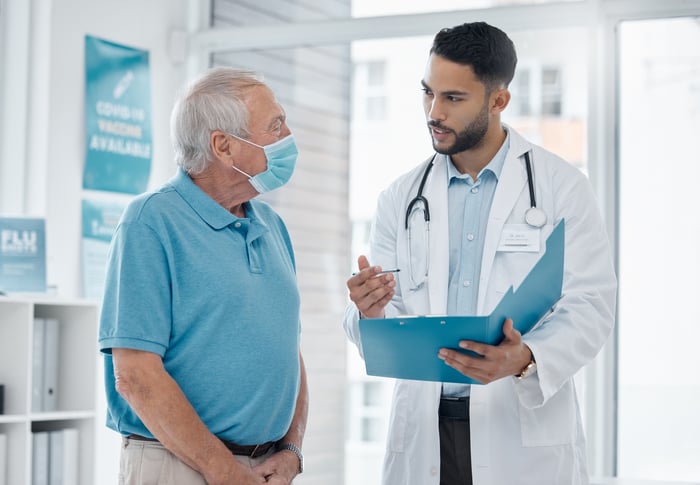 Long-term investors should consider purchasing Amgen (AMGN -1.19%). The company is set to take advantage of growing global prescription volumes with its robust pipeline with long-term revenue growth potential. There are 20 molecules currently in phase 1 clinical trials and 19 molecules in phase 2 or 3 clinical trials. These clinical trials cover a variety of potential indications, including various types of cancer, inflammatory conditions, and obesity.

One promising experimental drug in the pipeline, tezepelumab, is being co-developed with AstraZeneca (AZN 0.86%). Amgen and AstraZeneca believe that the drug will receive regulatory approval from the U.S. Food and Drug Administration in the first quarter of next year. This could be Amgen's first approved asthma treatment -- and a blockbuster one to boot. My forecast demonstrates that if approved by regulatory agencies throughout the world, by the end of the decade, tezepelumab could generate $2 billion in annual revenue, which would be split with AstraZeneca.

Amgen's pipeline also includes phase 3 biosimilar candidates, which are generic versions of biologic drugs. The first is targeting Johnson & Johnson's psoriatic arthritis and psoriasis drug Stelara. The second is Regeneron's Eylea, which treats a chronic eye disorder called Wet Age-related Macular Degeneration. And the third is AstraZeneca's rare disease drug Soliris. Regulatory approval of any of these biosimilars would give Amgen the opportunity to poach hundreds of millions of dollars in annual sales from competitors.

Amgen's 3.2% dividend yield appears to be safe since the company's payout ratio will be in the low 40% range this year. The company's deep pipeline is why analysts are expecting the company to grow its earnings per share by 6% annually over the next five years, which makes it a buy considering that it's trading at 13 times this year's EPS estimates.

AstraZeneca is also a leader in the global oncology field, which is expected to grow from an estimated $187 billion this year to $273 billion by 2025. Its three blockbuster cancer drugs (Tagrisso, Imfinzi, and Lynparza) continued to build on their momentum, growing combined first-half sales 25.3% year over year from $3.79 billion last year to $4.75 billion this year. Add in Forxiga's recent approvals in the European Union and Japan to treat chronic kidney disease, and it's understandable why analysts are predicting 20% annual earnings growth over the next five years.

At less than 17 times this year's EPS estimate, AstraZeneca and its 2.6% dividend yield provides investors with both growth and value as long-term healthcare trends play out.

Lastly, there is the generic-drug company Viatris, which was spun off from Pfizer's Upjohn business and combined with Mylan last November. A huge window of opportunity since rising branded drug costs globally will lead to a 7.1% annual growth rate in the generic-drug market from $371 billion in 2020 to $564 billion by 2026, according to market analysis company Research and Markets.

While branded drugs such as Viagra, Lyrica, and Lipitor accounted for approximately 60% of Viatris' $8.96 billion in total first-half revenue this year, new biosimilar products will soon take the spotlight.

Viatris' new product launches will greatly increase the biosimilar sales mix (approximately 7% of first-half revenue). One key product that is expected to launch by the end of this year is Semglee, the first biosimilar of Sanofi's insulin drug, Lantus. Semglee was co-developed by Viatris and its Indian partner Biocon. The drug should generate at least a couple hundred million dollars in annual revenue next year.

Even with five other biosimilar drugs for AbbVie's Humira already approved to enter the U.S. market in 2023, Viatris' Humira biosimilar known as Hulio should be able to amass another several hundred million dollars in annual revenue.

That's why analysts are anticipating that Viatris will be able to grow its EPS at 3.9% annually from $3.59 this year to $4.03 in 2024, meaning that Viatris is trading at less than four times this year's EPS estimates and barely three times 2024 projections. With $0.44 in current annual dividends per share, Viatris will have plenty of room to grow its dividend payout ratio from this year's 12%, especially once Viatris has repaid at least $6.5 billion in debt through 2023.

This makes Viatris' 3.3% dividend yield rather safe in the years ahead, building yet another reason that value and income investors alike should consider adding it to their portfolio.

2 Top Healthcare Stocks to Buy for the Long Haul
371%