Some trends will persist for decades.

There are plenty of good reasons to buy stocks and hold them for 10 or more years. The most obvious is the history of the stock market. The longer the holding period, the more likely you are to make money. There are many reasons. But one is that when a company is dominating a market, it is likely to keep doing so for some time.

Three companies that have been kicking butt for more than a decade are Intuitive Surgical (ISRG 1.11%), Illumina (ILMN 1.97%), and Align Technology (ALGN -0.09%). These three are at the top of the list of healthcare stocks I'm confident I'll be holding in 2031. Here's why. 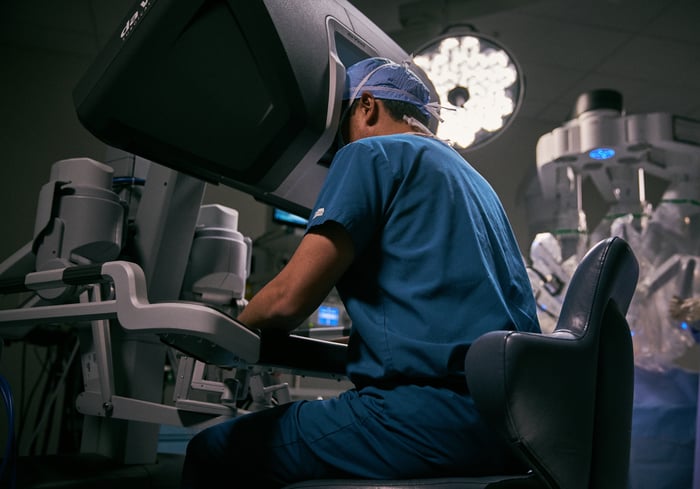 Robotic surgery has come a long way since Intuitive Surgical introduced its first da Vinci machine in 1998. The company rose from an attempt to build technology for the Defense Department. The grant was for creating a device so surgery could be performed on the battlefield from a remote location. While the project never amounted to much, it gave a few of the researchers the idea for Intuitive. What started as minimally invasive surgery on hearts grew to prostate surgery, hysterectomies, bariatric surgery, lung biopsies, and more.

There are now 6,335 systems in place around the world. The company was dented by the deferral of many elective procedures in 2020. But business has come roaring back. In the first half of this year, Intuitive has generated $2.76 billion in revenue. That's 33% more than 2019 -- faster than it grew in the decade leading up to the pandemic. Almost 29% of that is from instruments and accessories.

It's a perfect example of the razor and blade business model, where the equipment is sold once, but the products used with it generate recurring revenue over time.

Competition is on the horizon, or so we're told. Johnson & Johnson (JNJ -0.29%) purchased Auris Health in 2019. Its robotic device performs lung biopsies. Notably, the company was founded by Dr. Fred Moll. He also founded Intuitive Surgical. Auris' Monarch device had more than 100 customers and 8,000 procedures under its belt as of this June.

Medtronic (MDT 1.50%) is also planning a move into robotically assisted gynecological and urological procedures. The company is expecting European approval of its Hugo surgery system any day. Rather than being a threat, it's more likely that the market for robotic surgery will keep expanding and Intuitive will keep its lead.

An article in Forbes in early 2019 highlighted an analyst with a sell rating on the stock. It cited market saturation and competition. The business has only accelerated since then. And that was through a global pandemic. After two decades of dominating the industry it virtually created, I wouldn't bet against Intuitive Surgical over the next 10 years.

It's possible that historians look back 100 years from now and consider Illumina's genome sequencing instruments the most influential devices of the 21st century. Thanks to its technology, the cost of sequencing a single human genome has dropped from about $100 million 20 years ago to roughly $600 today.

That's opened up genetic research to institutions like universities, government labs, and research centers. It's also moved the technology into commercial applications for drug makers, diagnostic labs, and even direct-to-consumer companies.

The proliferation has led to revenue more than tripling and profit jumping 800% since 2011. Like Intuitive, Illumina employs the razor and blade model. Consumables make up 80% of its product revenue. Illumina also virtually owns its market. Most estimates have pegged its share of genome sequencing at somewhere around 80%. After regulatory hurdles last year, it gave up on an acquisition that would have added to that dominance.

The target -- Pacific Biosciences of California (PACB -0.09%) -- represents a mild threat with its long-read gene sequencing technology. Short-read sequences like Illumina's have to be amplified and pieced together to be read. That can be difficult for parts of the genome that have duplications.

Nearly two years later, regulators are once again throwing up hurdles to the company's growth plans. Illumina recently closed a deal to buy Grail -- a company with an early detection test for cancer using blood -- despite not yet receiving regulatory approval. Lawmakers in both Europe and the U.S. have expressed a desire to stop the deal. It's an interesting position since Grail was spun out of Illumina in 2016.

Regulators aside, the company's technology remains the standard in an ever-increasing quest to study and manipulate our genetic makeup for the benefit of humanity. Just as genomics ushered in an era where Moderna could design a gene-based vaccine in two days, the need for further understanding will fuel research and experimentation. Illumina will be at the center.

Invisalign clear teeth straighteners might not seem to have the same technological pizzazz as robotic surgery and gene sequencing. But you might be surprised by just how much goes into making sure patients are happy and orthodontists and dentists have productive, profitable practices.

Align has integrated the tech in its supply chain over the last decade. First, it bought the maker of the iTero 3D scanner. The device digitally renders a patient's oral soft tissue structure and teeth. In 2020, it purchased a company whose computer-aided drawing software lets doctors model tooth movement and plan reconstructive surgery. Those systems and services are slowly becoming a larger part of the business.

The company still has an enormous growth opportunity ahead of it. Management estimates 15 million cases are started each year. In the past 12 months Align has shipped 2.3 million cases. From 2016 through 2019, it grew shipments of aligner cases by 29% annually. The first six months of 2021 saw revenue jump 66% over 2019. Some are skeptical that those numbers can be sustained.

Although the past few years have seen several new entrants -- like Smile Direct Club (SDC -0.52%) -- begin tackling less complex cases as Align's patents expire, management believes technology will be the differentiator. Some analysts worry that the growth can't be sustained. I think the global opportunity should offer enough smiles to fix to hit Align's internal target of 20% to 30% top-line growth in the decade ahead. That should be plenty to keep rewarding shareholders.