Shares of the wholesale distributor gained on a strong earnings report. 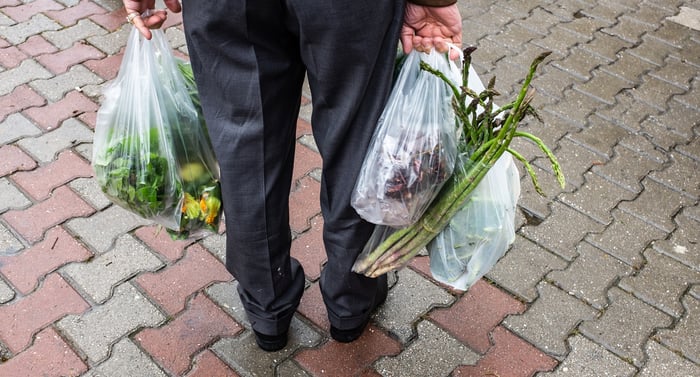 United Natural Foods, which is the biggest supplier to Whole Foods and serves 30,000 other organic grocery stores and conventional supermarkets, said revenue fell 0.5% to $6.74 billion as the company faced difficult comparisons with the year-ago quarter when Americans were avoiding restaurants. On a two-year stacked basis, however, revenue was up 7.5%.

That number actually missed expectations at $6.85 billion, and sales in all four of segments except its "Supernatural" segment -- which only includes sales to Whole Foods -- were down. However, investors seemed more focused on the bottom line. Gross margin improved slightly from 14.84% to 14.91%, and adjusted earnings per rose 11% to $1.18, which was well ahead of the analyst consensus at $0.80.

New CEO Sandy Douglas said in a statement, "I see significant opportunity to accelerate the value we create with and for our customers as well as the opportunity to make our operations more effective and efficient, both leading to continued profitable growth within our estimated $140 billion addressable market."

Investors were also likely impressed with the company's guidance for the current fiscal year. Management called for $27.8 billion to $28.3 billion in revenue, up 4% at the midpoint, and adjusted earnings per share of $3.90 to $4.20, also a 4% increase at the midpoint. Those numbers were better than analyst expectations at $27.81 billion in revenue and $3.38 in adjusted earnings per share.

Based on that forecast, United Natural Foods has some appeal as a value stock, trading at a price-to-earnings ratio of less than 12 based on that EPS guidance.