The company has a plan, resources, and the connections to potentially make it all work.

While all eyes are usually on Elon Musk's high-profile Tesla, many other companies are also vying for a piece of the fiercely competitive electric vehicle (EV) pie. These include Fisker (FSR 1.40%), a company bearing the name of its founder Henrik Fisker. It went public slightly more than a year ago. The company's stock has seen several dips recently, though some of these are in tune with drops across the whole EV market. While the company has some risks, it's also got some significant advantages that could help it start achieving sustained growth within the next year or so.

Small and flush with cash, Fisker is aiming at the under-$40,000 electric SUV market with its Ocean, still said to be on schedule to release in November 2022. Made to appeal to the eco-conscious driver, the vehicle will include recycled materials and a "vegan" -- that is, leather-free -- interior. The company also has another vehicle in the works called the PEAR or Personal Electric Automotive Revolution. The PEAR has been kept tightly under wraps but seems to be a small vehicle with a maximum capacity of five people and a price tag under $30,000. The PEAR will be made by Taiwanese manufacturer Foxconn (FXCNF 5.73%), though U.S. bans on direct-to-consumer vehicle sales are hampering the project. 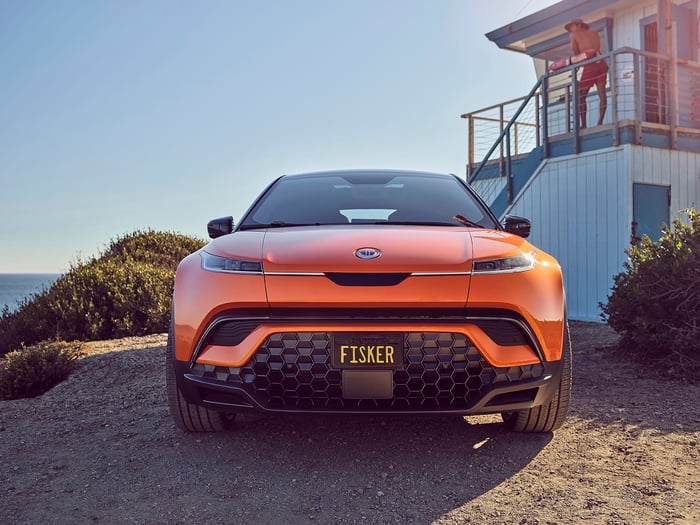 With an affordable EV strategy as its cornerstone (though it also has more expensive, tricked-out models of the Ocean planned), Fisker claims it is picking up plenty of pre-orders. While pre-orders are not purchases, the company says it has continued to see interest climb despite scanty advertising spend. Its September 2021 investor presentation indicates it currently has approximately 62,500 pre-orders even before the upcoming November 2021 public demonstration of the Ocean SUV.

Fisker has good partnerships and wads of cash

One of Fisker's key advantages over other EV start-ups is its partnering with an established company for manufacturing rather than attempting full-scale production itself. Fisker has a deal with EV parts maker Magna International (MGA -1.19%), which will see the latter building the Ocean to Fisker's specifications. Magna has years of experience developing and constructing EV parts in addition to building complete vehicles for other clients. Its established business model and strong technological assets increase the odds that the Ocean will release on time and perhaps prove relatively bug-free.

Fisker CEO Henrik Fisker also pointed out in a presentation at the Morgan Stanley Virtual 9th Annual Laguna Conference on Sept. 15 that his company has "the benefit of two very powerful partners which have access to suppliers directly [sic] of chips," referring to both Magna and Foxconn. If the twin alliances should help Fisker avoid the worst of the chip shortage, this could prove to be a significant boost to the company's performance once the Ocean rolls out.

Fisker also has plenty of cash to keep it running until the Ocean hits showrooms. Thanks to going public through a special purpose acquisition company (SPAC) merger and the cash inflow from pre-orders, the company had $952 million in cash by June 30, 2021. At that time, Fisker additionally had a balance sheet completely free of debt. Since then, in August, it issued convertible notes which netted it $571 million more in proceeds. The company intends to settle the 2026 notes with cash, leading to either zero or limited dilution of stock value. Overall, it has $1.53 billion in cash and cash equivalents, plenty of liquidity to carry it through to production.

While some analysts have downgraded the company based on the existence of energetic competition in the EV market, at this point, Fisker still arguably looks like one of the more upbeat start-up electric car stocks. It is certainly in a better position than some rivals, though the market may be overly negative about some of these, such as Workhorse Group.

Fisker has enough advantages -- strong partnerships, good cash position, and an affordable, eco-friendly vehicle already generating ample interest -- to likely have long-term potential as a growing niche automaker. Alternately, a big car company might eventually acquire it, making it a subsidiary brand like the originally independent Jaguar or Jeep. That scenario would probably be a win for Fisker investors, too. Complete failure appears unlikely, and a cautiously bullish approach to Fisker seems justified.