Amplify's large oil spill off the coast of California has forced it to halt operations in the Beta field.

Shares of Amplify Energy (AMPY -2.21%) lost close to half their value Monday morning, trading down by almost 45% as of 12:55 p.m. EDT as investors anticipated how one of the largest oil spills in recent history would impact the upstream oil and gas producer.

On Saturday, Amplify Energy announced its subsidiary, Beta Offshore, noticed an oil sheen roughly four miles off the southern California coast and notified the U.S. Coast Guard. Amplify Energy has shut down all its production and pipeline operations at the Beta field. 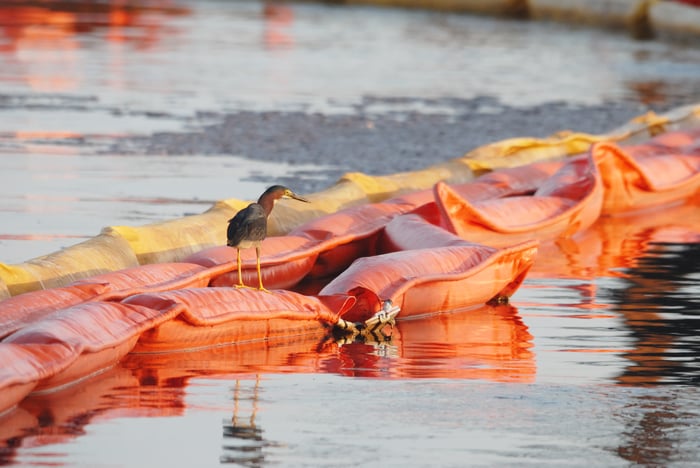 The 126,000-gallon oil spill is among the worst in recent times, which is why investors in Amplify Energy are spooked. The company may not only have to pay fines but is also losing production during a period when oil and natural gas prices are soaring.

The latest industry updates suggest there's no more oil leaking from Amplify's assets, but several local, state, and federal agencies are involved in recovery efforts and the extent of damage is anyone's guess for now.

Unfortunately for Amplify Energy, the timing of the oil spill couldn't have been any worse: Just last quarter, the company announced higher capital spending plans, including on the Beta field, to make the most of the rebound in oil and natural gas prices. The company also upgraded its free-cash-flow guidance to a range of $45 million to $55 million for 2021 and more than $200 million through 2023.

Although Amplify Energy also produces oil in Texas, Oklahoma, and the Rockies, the California oil spill has thrown a monkey wrench into the company's growth plans at a time when even smaller oil and gas producers are minting money, paring debt, and doling out cash to shareholders.