Building an intuitive understanding of these warning signs is critical for success with pharma stocks.

Pharmaceutical companies can be a great pickup for the conservative portion of your portfolio. Everyone is going to need the life-saving medications that pharmas develop at one point or another, and that means they're never going to go out of style.

Still, it takes more than making medicines for a drug stock to be lucrative for shareholders, and non-experts might not know what to avoid. Follow along as I explain two of the biggest red flags to be aware of when you're investing in pharma stocks. 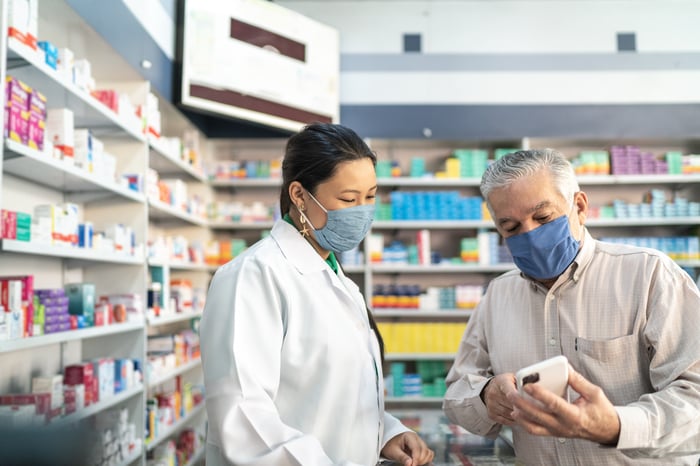 Biopharma companies develop new drugs and then sell those drugs for revenue. So it's a red flag when a company's pipeline doesn't contain enough drug programs in development. Let's explore what this means a bit further, because it's extremely important to being an effective pharma investor.

It typically takes around 10 years to develop a new drug, when accounting for all of the work that goes on in the discovery phase, preclinical studies, clinical trials, and eventually, commercialization. Plus, only 13.8% of drug candidates prove themselves to be safe and effective in clinical trials.

That means if a pharma company wants to have a consistent and growing stream of revenue from drug sales over time, it needs to be constantly initiating (or acquiring) a hearty helping of new development projects. It also means that if a company's pipeline is sparse due to failed projects or a lack of resources to initiate new projects or advance old ones, hard times are all but guaranteed to be ahead.

Furthermore, drugs don't yield revenue forever. Some of the intellectual property protections afforded to new drugs eventually expire, and generic drug makers can copy the product to make a cheaper version, which inevitably erodes the market share of the branded drug. For a wholly new drug, exclusivity protections can last as few as five years. The more money a single drug brings in, the more painful its exclusivity expiration will be -- unless there are an even larger number of new programs scheduled to hit the market.

Take AbbVie (ABBV -1.76%), for example. While its pipeline is absolutely chock-full of programs in every phase of development, its revenue will still take a substantial hit over the next few years as its blockbuster drug, Humira, gets its market share eaten by generics starting in 2023. But because it steadily invested in investigating new drugs over the last decade, there are so many other projects expected to hit the market over the next few years that the dip in revenue is expected to be transient.

In short, not all pharma companies have enough in their pipeline to pull off such a smooth transition between revenue-bearing programs like AbbVie is planning. The smaller the company, the more you'll need to be on the lookout for weaknesses in the pipeline that could leave investors shouldering falling stock prices for years on end.

Manufacturing drugs is capital intensive, as is the research and development process. Profitable pharmas can fund their operations with the cash flow generated from sales of medicines. A small amount of debt typically isn't a problem, and it can actually be a good way to finance capital expenditures rather than using cash.

But for unprofitable businesses, burning cash on hand and taking out debt may be the preferred options, and that can lead to a world of trouble for shareholders. Let's consider an example.

In 2020, the generic drug maker Teva Pharmaceuticals (TEVA 1.44%) spent $2.43 billion on repayment of debt, while also taking out an additional $550 million, making its total debt a whopping $26 billion. It isn't close to being profitable, and its quarterly revenue grew by only 1% year over year as of Q2. Now it has only $2.44 billion in cash and $3.53 billion in current debt. Shareholders can't count on revenue growth to spike anytime soon, as the demand for generic drugs is fairly consistent and the market for a given drug will be split with other generic manufacturers.

How will Teva navigate this conundrum? I can't say for sure, but I wouldn't be surprised if it issued billions of dollars in new shares. That would bludgeon shareholders, but it'd allow the show to go on until Teva returns to profitability.

And therein lies the reason for excessive debt being a red flag. For pharmas, fresh revenue growth can be years away, and contingent on progress in the clinic, or in Teva's case, on exclusivity protections expiring. Especially when the margins are thin, companies may be incapable of both paying off debt and investing in new projects, which perpetuates the problem.

Therefore, if you don't want the risk of perpetually slow growth or share dilution, it's often wiser to steer clear of indebted pharmas.