The possible alliance is a spark of hope for Lordstown, though the situation is still risky.

Looking to get its financial engine firing vigorously again, electric vehicle (EV) start-up Lordstown Motors (RIDE -7.19%) announced a tentative deal to sell most of its eponymous Lordstown facility to Foxconn (FXCNF 5.73%). Foxconn is a Taiwanese electronics maker gaining an EV market foothold through partnerships with electric car companies like Fisker (FSR 1.40%). While the alliance is a gamble, it could free Lordstown from several current problems, explaining the stock market's enthusiastic response.

What the deal involves

Speculation ran high on September 30 that troubled EV enterprise Lordstown Motors might be angling to sell its factory to Foxconn. A separate press release filled in details later that day. The Lordstown Complex, the pact's centerpiece, is a large factory compound that General Motors (GM -0.16%) opened in 1966. Production at Lordstown began tapering in 2016, and the factory closed in early 2019. In November 2019, Lordstown Motors bought the plant for an undisclosed amount, with GM lending it $40 million to help complete the acquisition.

Lordstown Motors' sale of the Lordstown Complex to Foxconn and other details is an "agreement in principle" at the moment. Hence, the two companies agree to negotiate further based on the general outline provided. So there's no binding contract yet, though remarks by both parties' executives point to strong interest in drafting one. 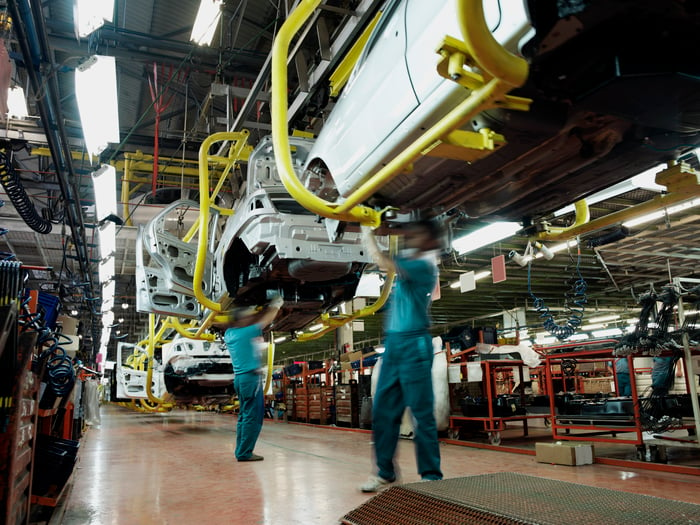 If the deal goes through, Foxconn will pay $230 million to acquire the Lordstown facility, excepting the assembly line where Lordstown Motors builds its hub motors, plus several other small production lines. Foxconn gets a stake in its partner, receiving warrants it can choose to exercise for up to 1.7 million shares of Lordstown stock. The pact, if successful, will give Lordstown a cash infusion, and Foxconn a direct incentive to work for Lordstown's survival and success.

As the Taiwanese company's partner, Lordstown Motors will have its Endurance pickup manufactured for it by Foxconn, sparing it the setup of its own production lines. Foxconn's chairman Young Liu seems confident in the manufacturing alliance's possibilities. He said "the innovative design of the Endurance pickup truck, with its unique hub motors, delivers an advantageous user experience and has manufacturing efficiencies," while Lordstown CEO Daniel Ninivaggi says the deal will "provide operational, technology and supply chain benefits to our company and accelerate overall scaled vehicle production."

One possible warning note is that Foxconn previously broke ground in Mount Pleasant, Wisconsin to build a $10 billion factory complex there. However, it ended up spending only $300 million, despite government incentives and the use of eminent domain to expand the potential site. There are also key differences, though, since the Lordstown Complex is a much more cost-effective "turnkey" facility that will get production up and running faster at a fraction of the cost. Therefore, the comparison is largely invalid.

What the factory sale could mean for Lordstown Motors

Lordstown Motors has struggled for some time to bring its Endurance electric pickup truck, a vehicle featuring hub-mounted electric motors, to market. Before Foxconn stepped in, the company was rapidly running out of cash. Richard Schmidt, the company president, said in a June statement Lordstown would probably be out of money by May 2022. The company provided details in a 10-Q filing with the SEC, where it issued a going concern warning. Lordstown Motors said in the filing it "believes that its current level of cash and cash equivalents are not sufficient to fund commercial-scale production and the launch of sale" of the Endurance pickup truck.

Other problems plagued the company. The Endurance's first public appearance, at the San Felipe 250 race in Baja, California, saw the pickup truck drop out after just 40 miles of the nearly 243-mile circuit. Lordstown's engineers were concerned it would fail while trying to climb steep terrain just ahead. In mid-September, however, a Jalopnik reader apparently captured a photograph of five updated Endurance trucks being moved on a car transporter, indicating development is still underway and some vehicles are really getting built.

Things looked rather desperate for Lordstown Motors quite recently, with money running out rapidly and no non-prototype vehicles produced. However, Foxconn could solve both Lordstown's major problems. The plant sale will give it a cash infusion, enabling operations to continue much longer. Cooperating with Foxconn on Endurance production will give it access to the successful manufacturing know-how and EV technology of its Taiwanese partner, just as Fisker is using Foxconn's and Magna International's capabilities as a springboard to getting its own Ocean SUV into showrooms on schedule.

Lordstown is still a long way from proving its potential among electric car stocks, but if the factory sale and partnership pact happen, it may have a fighting chance. For now, it looks like too much of a gamble for any but the most risk-accepting investors, but Lordstown is also worth watching to see if its bold plan bears bullish fruit in the medium to longer term.