It offers just what trend-seeking bargain hunters are shopping for.

The stock market is sending ominous warning signals lately. For the month of September, the S&P 500 index fell nearly 5%. After rising on the first day of the month, the index is seeing red again. But not all businesses will suffer if the market's volatility is correctly forecasting economic troubles ahead.

That's why shareholders of Five Below (FIVE -0.43%) might not need to fear the downturn like investors in some other companies. In fact, its product selection, target customers, and growth plans might actually mean shareholders could benefit. Here's how. 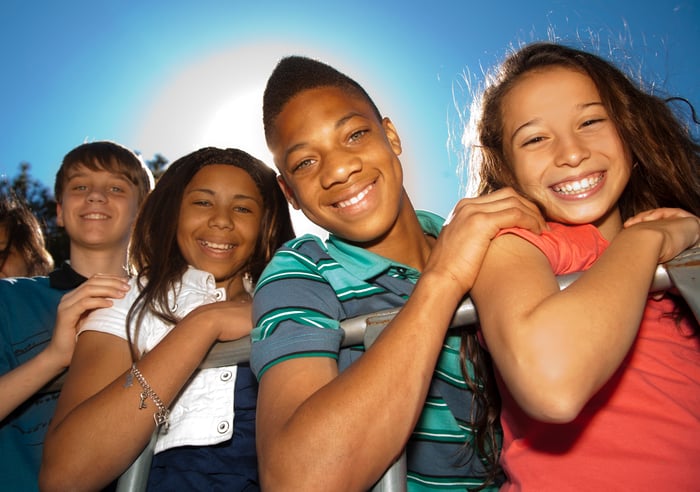 Its selection of products is difficult to copy

Admittedly, it seems counterintuitive to think that a retailer could benefit from a market crash. But Five Below has carved out a desirable niche.

Its trendy yet affordable products aren't the kind that its young customers can easily find elsewhere. The company groups its products into eight categories, including sports, tech, room, and style. It has been able to capitalize on trends like fidget spinners and selfie sticks while also crafting deals with brands like Disney (DIS -3.52%), Lego, and Crayola.

It's led to incredible growth even through a pandemic. Sales over the past 12 months were almost $2.6 billion. That's 40% more than they were in the fiscal year that ended January 2020. Since 2015, the year after Joel Anderson was named CEO, revenue has climbed 279%. That number pales in comparison to cash from operations and net income. 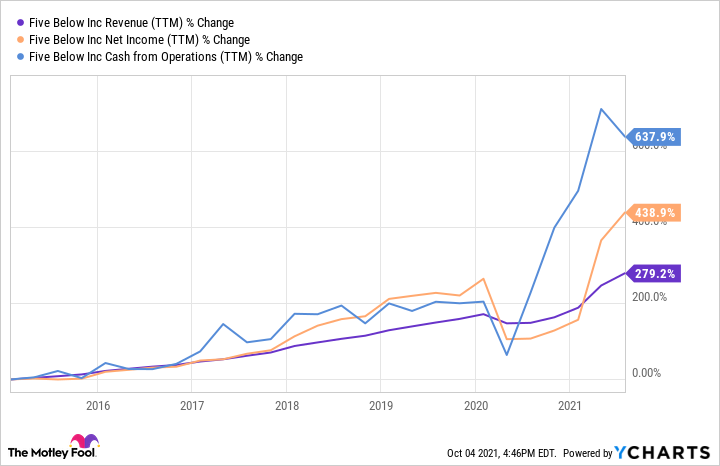 The stores are a destination for its young customers

Its customers trend very young. The company targets Gen Z kids ages 8 to 14 and millennial parents 24 to 44. Unlike some other bargain stores like Dollar Tree (DLTR -2.22%) and Dollar General (DG 0.81%), Five Below has customers across a broad income spectrum. The company claims more than one-quarter have a household income above $100,000 per year.

Those customers also shop frequently and take their time browsing. More than 70% spend at least 15 minutes shopping. And they visit the store an average of 10 times per year. That supports the idea that Five Below is cultivating a desirable experience. It's a destination, not just a place to grab an item on your shopping list.

Need more proof? The company's stores are typically in high-traffic shopping centers with lots of alternatives. Yet more than half of the customers surveyed had already planned to make Five Below the first stop. Management has recognized the demand and been rapidly expanding the footprint.

Five Below opened its 100th store in 2008. Store No. 1,000 opened its doors 12 years later. The pace hasn't slowed. The store count is growing at 20% per year and was supported by five distribution centers (one of them dedicated to e-commerce) at the end of 2020. This year, the company has opened another in Arizona and has a seventh slated for 2022 in Indiana. The hubs are needed. Management anticipates opening between 170 and 175 new stores in 2021 alone.

There is no end in sight. Nor should there be. The company reports a payback of less than one year on newly opened stores. Before the pandemic, normalized metrics showed a 150% return on investment for new stores. At that rate, it would be irresponsible not to open as many new stores as possible.