A long-term mindset is required for this manufacturing innovator.

Technology has had a profound effect on manufacturing. Analysis firm Oxford Economics says robots will replace up to 20 million jobs in the sector by 2030. But that application of technology is mostly about automating high-volume operations.

When it comes to designing and creating new parts, it's often still a labor-intensive, time-consuming process. That's where Proto Labs (PRLB -1.06%) comes in. The company offers a desirable combination of speed, quality, and price for one-off and low-volume projects.

The stock has been crushed recently. But giving up now could be a costly decision -- one that causes investors to miss out on big gains as the world gets back to normal. Here's why. 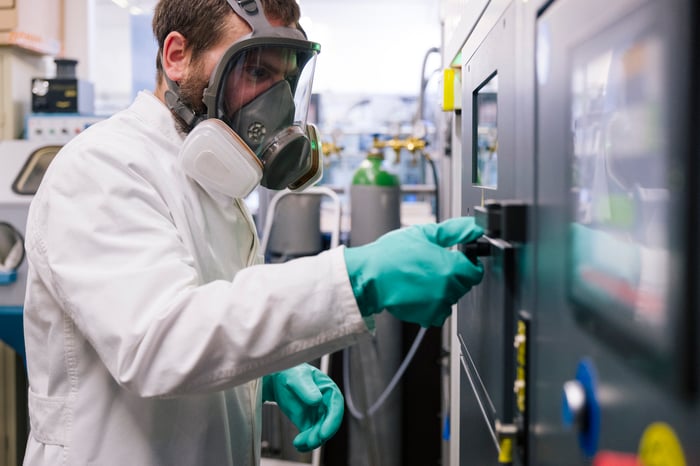 A technology whose time hasn't quite come

When the company went public in 2012, the quick turn manufacturer was seen as a play on the future of the manufacturing industry. The injection molding and machining services markets it operated in were estimated to be $50 billion and $35 billion, respectively. Although Proto Labs has steadily grown sales -- compounding revenue at 16% per year over the last decade -- the stock has had wild swings. It is currently about 75% off its all-time high. 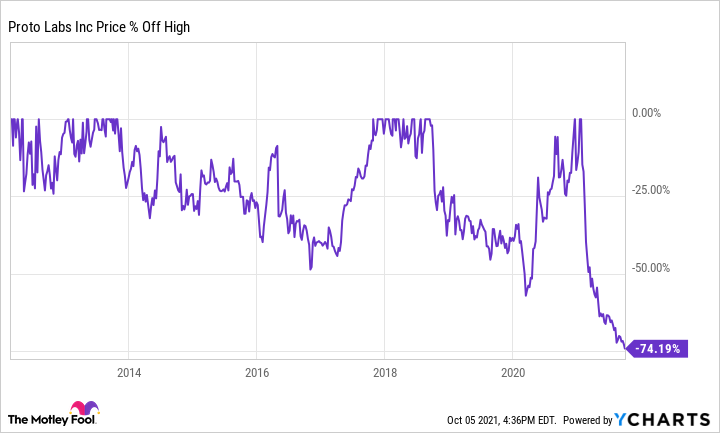 That's because the combination of contracting manufacturing activity in 2019, followed by a global pandemic, crimped margins and led to questions about how big an opportunity the company really has in front of it.

One possible catalyst is 3D printing -- a segment Proto Labs has entered through several acquisitions beginning in 2014. For the first six months of 2021, it made up 15% of sales and was the fastest-growing part of the business.

ARK believes the opportunity for the technology could grow to $120 billion globally by 2025. That would give the company a lot of room for growth from its current $1.8 billion market capitalization.

Cathie Wood seems to be giving up

If Cathie Wood still believes in 3D printing, she must not think Proto Labs will occupy a prominent place in the industry. Earlier in the pandemic, the stock made up 10% of her ARKQ Autonomous Technology & Robotics ETF (ARKQ -2.32%). It was the fund's second largest holding behind Tesla. Lately, she has been selling relentlessly. The stock now makes up only 1% of the ETF.

Despite her lack of confidence, the price-to-sales ratio is at a level that has corresponded to great buying opportunities in the past. That said, the shrinking profit margins mean the price-to-free cash flow is still above the levels it bottomed at in the past. 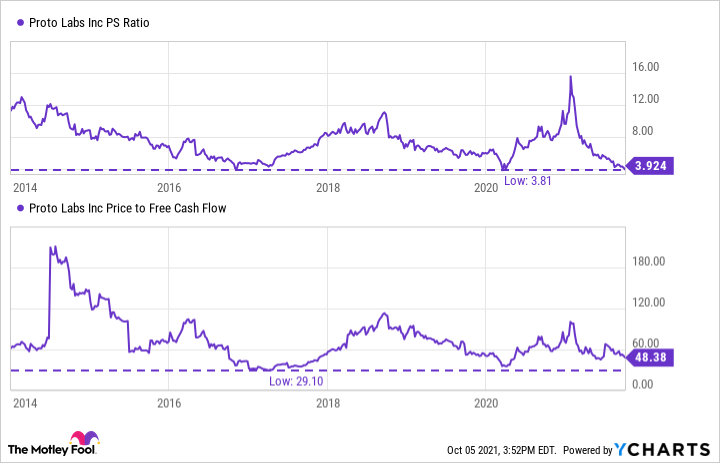 Proto Labs has been a consistent, if not exciting, company over the last decade. It has a 3D printing segment that is sparking some growth and should be in a good position as global manufacturing recovers from the pandemic and supply chain constraints.

The jury is still out on whether the stock will find its way back to all-time highs. But even if it doesn't, it could make a solid investment over the next three to five years.