Before the recent sell-off, Square (NYSE:SQ) had ridden a wave of stock price growth driven by rapid revenue increases and an expanding ecosystem. Now, one key disadvantage has left this fintech company vulnerable to the recent sell-off that has hit many growth stocks.

Despite that drawback, several crucial advantages can still take Square and its stock higher over the long haul. 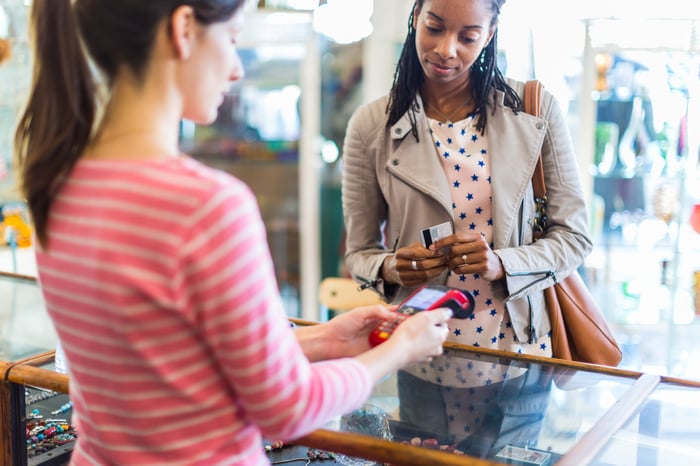 Reason to buy: The Square ecosystem

Square has ventured far from its initial smartphone credit card payments device-making business. The company has expanded, particularly on the business side, adding features to its ecosystem such as cash management systems, payroll, and marketing functions. Most recently, it purchased AfterPay, which allows it to offer an interest-free option for borrowers through this buy now, pay later (BNPL) business.

But the one addition that could help it stand out is Square Banking. This industrial bank, which only serves businesses, gives Square a foothold in traditional finance. More than offering business checking, savings, and loan services, having this bank means Square can serve as a one-stop financial shop for these enterprises. Thus, it stands out over other fintech companies that offer only limited functionality within traditional finance.

While it does not serve all these financial needs for individuals, the company has also made strides on the consumer side, particularly with CashApp. Most types of payments and transactions can be handled within the app, and it includes its own debit card. Still, consumers might need an outside bank to conduct some transactions outside of Square's ecosystem.

However, CashApp's functionality has made it popular for payments, stock transactions, direct deposits, and even tax preparation. It has also begun to allow BNPL options, giving consumers an additional payment method outside the traditional financial system. Additionally, CashApp has stood out by allowing Bitcoin trading, forcing its archrival, PayPal's Venmo, to introduce its own crypto offering.

This has likely helped CashApp in its efforts to catch up to Venmo in popularity. The company said it had reached 70 million users over the last year while making an announcement regarding Cash App Pay. Currently, Venmo claims over 75 million users.

Reason to buy: It's just getting started

Furthermore, for all of the hype surrounding Square and its $100 billion market cap, one might assume it operates all over the world. But it provides service only in a handful of developed countries, having launched in its sixth country, Ireland, in the spring. That was its first country that uses the European Union's primary currency, the euro. Since 19 countries have adopted this currency, this eases potential expansions into other EU countries.

The euro's reach probably helped it launch integrated and omnichannel solutions in both France and Spain in September. Since Square had already offered services in French and Spanish, that move should not come as a surprise. Moreover, as Square expands its language capabilities, moves into other EU countries could come soon.

The stock is not cheap. All its successes have sent its stock price rising, particularly since March 2020. This move has taken Square's P/E ratio to approximately 200, even after a recent price pullback. This comes in far above PayPal's earnings multiple of just above 60.

The fact that analysts project 124% earnings growth in the current fiscal year could help justify that lofty multiple. Nonetheless, early consensus analyst estimates point to a 27% increase in earnings in fiscal 2022. While still robust, that level of growth could make a 200 P/E ratio difficult to justify.

Despite the high valuation, investors should consider Square. The finance ecosystem, especially in the business realm, allows businesses to handle their financial functions under one umbrella. Since it operates in only a handful of countries, expansion and market growth will both take Square stock higher over time. But investors might want to consider keeping this fintech winner on a watch list while earnings increases catch up to Square's stock price growth.