Any short-term pain should lead to long-term gains with these stocks.

Every crisis presents an opportunity. For investors, substitute "stock market crash" for "crisis."

Don't get me wrong. I'm by no means predicting that the stock market is going to crash anytime soon. The volatility we've seen in recent days could as easily lead to another big run for stocks as it could lead to a massive market downturn.

But a major sell-off would definitely give investors an opportunity to buy great stocks at a discount. Here are three top stocks to buy if the market crashes. 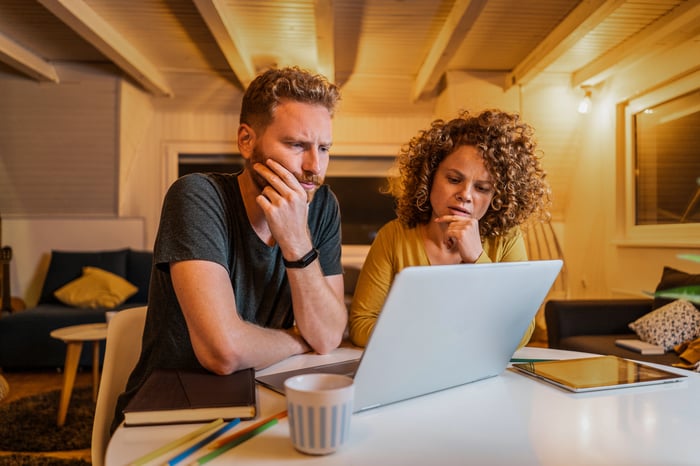 I view Intuitive Surgical (ISRG -0.93%) as one of the best healthcare stocks to buy for the long term. Any decline for this stock is almost sure to be only a temporary one.

We've seen this demonstrated during the COVID-19 pandemic. Intuitive Surgical's share price sank as hospitals pushed back non-emergency surgeries. However, the company had the financial strength to weather the storm. And it was only a matter of time before the volume of procedures using Intuitive's robotic surgical systems rebounded.

There are two trends that bode well for Intuitive Surgical's future prospects. First, aging demographics across the world will drive higher numbers of surgeries. Many of these surgeries will be ideally suited for robotic assistance. Second, technological innovation will expand the types of procedures where robotic systems can be used.

MongoDB (MDB -7.15%) stock has been hit harder than the major market indexes over the past few days. In the big scheme of things, though, MongoDB's pullback is minor. The tech stock has still delivered a 6X return over the last three years.

Sales for MongoDB's Atlas cloud-based database platform are soaring. That momentum could accelerate with the company's new serverless architecture where customers don't have to choose a specific server type or size. Atlas will automatically scale to meet load demands with no capacity planning by the customer required.

Despite MongoDB's phenomenal growth, the company still only has a market share of barely over 1%. With its superior database technology, I expect that MongoDB will keep expanding its market share significantly. This stock is capable of delivering another 6X return or even greater over the next several years.

If you like MongoDB's performance over the last three years, you'll probably love Sea Limited (SE -3.85%). The stock has skyrocketed more than 2,400% during the period. This jaw-dropping gain has given Sea a steep valuation. But a market crash would likely allow investors to pick up this stock at an attractive discount.

I think the company should consider changing its name to Sea Unlimited to better reflect its opportunity. Sea is best known for its Free Fire mobile game, which reached a record 150 million-plus daily active users in the second quarter. However, gaming is only one of the company's areas of focus.

This approach is part of Sea's overall strategy. The company follows with Shopee after its mobile games gain popularity in a country. That then sets the stage for further growth with its Sea Money digital payments business. This stock should remain a huge long-term winner, especially as it launches new games.